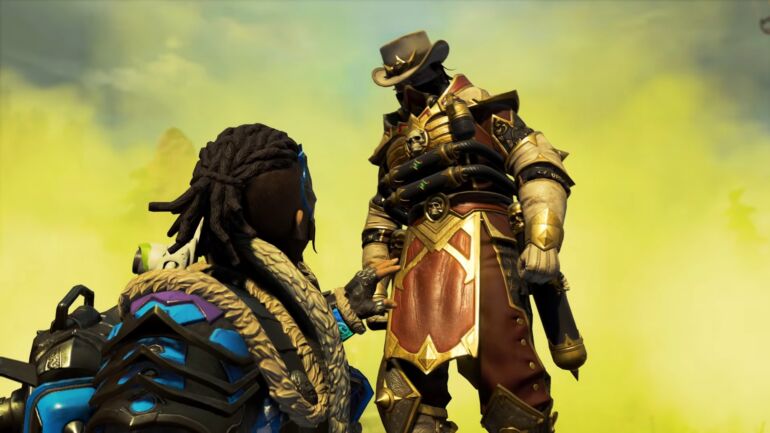 The upcoming event will be held starting March 9 until March 23. This will bring a lot of changes to the game like having new ways to play the game, releasing on Nintendo Switch, and more.

The new Caustic Treatment is a location where there are a lot of high-quality loot, but it is also full of traps to watch out for. The Water Treatment will now be changed to this. According to the in-game story, it was constructed to prevent the Crash Site fuel spill from reaching the ocean.

Players will have to drain the toxic liquid from the center of the facility. Completing this will grant players access to four gold loot items locked in cages. They will need to be fast though.

The Mirage Voyage has also gone missing due to the Caustic event. It should pop up somewhere in the arena when players least expect it.

Ring Fury is a new playlist takeover that will follow the regular BR rules, but each round, one or more Ring Flares will appear on the map within the current map. These will slowly expand pockets of the Ring within the arena.

Getting caught up in a Ring Flare will take damage equal to what is dealt in the Ring. Players will get a short warning first on the map and the minimap before it appears. Legends will be shouting if they are going to be in direct danger or there will be an opening somewhere nearby.

There is also the Heat Shield that players carry around in their inventory on drop. By using the Heat Shield, players will avoid damage of the Ring Flares or the Ring. There are more of these so be on the lookout.

The Heat Shield will cast a protective dome and enables players to loot and revive within it. By being inside it, they can use the healing items that can speed up by 50 percent and the revivals are 25 percent. This will only happen if the Heat Shields are activated within the ring. No bonuses will be given if it is INSIDE the safe zone. It also degrades when it gets hit by the Ring over time.

This particular device will have its own slot called the Survival Slot. It makes it easier to determine the items and will not mix in with the normal loots.

Ring Fury will replace the regular Duos and Trios playlists for the two-week duration of the Collection Event. Unlike previous takeovers, this is an Escalation Takeover. This means every few days, the settings will be different particularly increased.

No-Fill Matchmaking will be the best way to play the game going solo. There will be a new checkbox called Fill Matchmaking. Unchecking that will let players go solo and let them fight against teams of three. This will give an opportunity for others who like to play the lone wolf in games.

Here are some things that might be used for No-Fill Matchmaking:

There is a limit to this though. There will be only six potential No-Fill players in any match. It will not be available in Ranked matches.

The Chaos Theory Collection event will offer some freebies like new earnable cosmetics including the legendary Kraber and EVA-8 weapon skins.

Every day, players can earn up to 1,000 points and the challenges will refresh daily. There are stretch challenges that will reward four unique badges if they are completed during the event. The challenges will also stack with the Battle Pass.

Chaos Theory will introduce a new set of 24 themed, event-limited cosmetics. They can be purchased directly or earned in Event Apex Packs for the entire duration of the event. Collecting all 24 event items unlocks the Bangalore Heirloom set. After the event, it will be available via heirloom crafting.

Since the Anniversary Collection Event has ended, the crafting costs for the skins have returned. Each Event Pack will come with one event item and two non-event items.

Dev note: Caustic is brutally effective at slowing down engagements. The entirety of his kit revolves around gas with a large area of effect, slow, vision obstruction, and direct health damage. It’s proven to be too oppressive in too many scenarios especially considering teammates can play in gas relatively unimpaired. Significantly reducing gas damage (without taking it away completely or having it affect armor instead) seems like a fair compromise that stays true to the character while making him less oppressive on the receiving end. We will be monitoring the data and gameplay closely. If these changes hit Caustic’s appeal or effectiveness too hard we will revisit accordingly.

Dev Note: Low Profile has been used as a balancing tool for both mobile and/or small legends. Although Path is still mobile, his hitbox is large. While his overall win rate and encounter win rate is by no means low, it’s hard to justify keeping Low Profile on a hitbox of his size.

Dev Note: Walls should be beefy and powerful once built. Before Rampart shipped, we were worried that her nests would be too oppressive and so we gave enemy players the option to quickly clear them out with grenades. This wasn’t necessary, as it turns out, so we’re removing increased damage from grenades against Amped Cover and Sheila.

Dev Note: The goal of these changes are to place this weapon’s identity between the fast fire EVA-8 and the heavy hitting Peacekeeper. The Mastiff has consistently been dominant in close quarters combat given its forgiving spread pattern and high damage spikes with each shot. This change reduces that high damage potential in order to limit the amount of two pumps players experience on the receiving end.

Dev Note: The burst damage from the Hemlok’s hip-fire was feeling a little too consistent for an AR that should excel at medium range. This change mitigates the Hemlok’s close quarters damage spikes that felt bad on the receiving end.

Apex Legends is now available on PC, PlayStation 4, and Xbox One. Also playable on PS5 and Xbox Series X/S. Nintendo Switch version is coming on March 9.