Apex Legends Legacy: Who Does Valkyrie Work Best With? 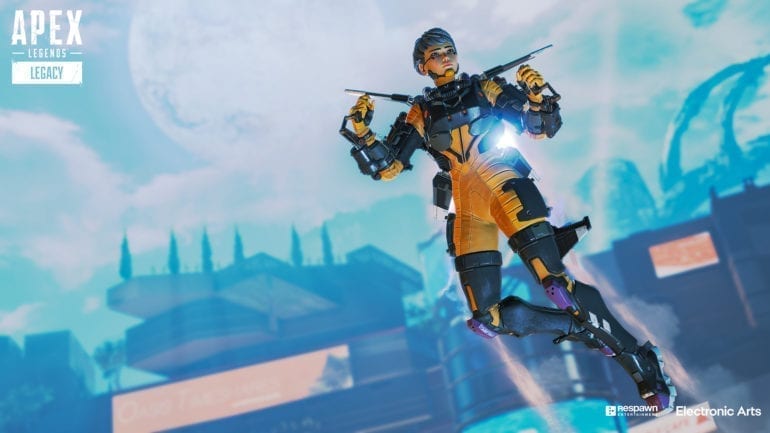 When Valkyrie is on your squad the skies are yours. This daughter of the infamous pilot Viper rules the air uncontested with few other legends capable to challenge her on her terms. But if you’re ever grouped up with Kairi Imahara, make sure those below don’t shoot her out of the sky. She may have the blood of a pilot running in her veins, but she’s bound to go down like dear old dad without proper team composition.

So that begs the question: who should be the best partners for Valkyrie in the brutal and bloody Apex Games Tournament?

Having a motherly figure on your squad can do more than just bring up the mood. The happy-go-lucky and charming Mary Somers can keep even a hostile squad together. Literally. Her ultimate, black hole, can drag hostiles into one location making it difficult for them to escape Valkyrie’s missiles.

On a purely surface level, putting Valkyrie with Revenant in a team seems like a bad sitcom waiting to happen. But for people who are more interested in playing aggressively, then Revenant’s totem can offer Valkyrie the ability to slip in and out of fights that encompass a large distance.

Both Valkyrie and this daredevil junkie live fast and kill fast. So it’s no surprise that those who rely a lot on speed would go so well together. Even with Valkyrie moving at high speeds above ground, Octane is never too far behind to catch up. Octavio’s ultimate, jump pad, capable of acting as a take-off platform for Kairi for a boost up.

Having not just one, but two recon specialists in your squad can seem unnecessary. But bare with me, our little hacker’s got a few tricks up his sleeve to make himself a useful asset to Kairi. His drone’s ultimate, EMP, can assist in slowing down enemy hostiles making them easier marks for her tactical ability and increasing the damage done. And with both Valkyrie and Crypto watching the skies, you’ll never have an enemy squad evade or surprise you.

Never say that ole’ Fusey can’t work well with the youngsters. With Walter’s ability to chuck any type of grenade at longer distances and Kairi’s airborne view of the battlefield, not to mention her rockets, you essentially have a mobile mortar squad waiting to rain shrapnel and fire to the enemy team. You can even ask mother figure Somers to help make sure that the enemy squads stays put like good little boys and girls. If that doesn’t work, then daddy Fuse can personally put them in the time-out corner inside his ring of fire. Who said Apex Legends couldn’t keep things family friendly?

As always your mileage may vary with these partners. Season 9 is still coming up and will relatively be new. Tactics and strategies will change along with the environment and weapons. And most likely, Season 9 will be introducing a new meta for players to take advantage of. But as someone who had some time playing as Valkyrie before the next season, these are the best possible squad members I could ask for.

These suggestions are best suited for the battle royale content of Apex Legends. As with the new upcoming mode, Arena, which will operate under vastly different rules will coerce players into a different mindset separate from this mode.

If you want to see our suggestions squad combinations in Arena mode, you can click here.

Now’s your chance to finish all that Season 8 has to offer before it’s over. You still have some time. Come Season 9, the skies will no longer be safe. And you’ll always remember to look above you for Valkyrie.

Apex Legends Legacy will launch on May 4.