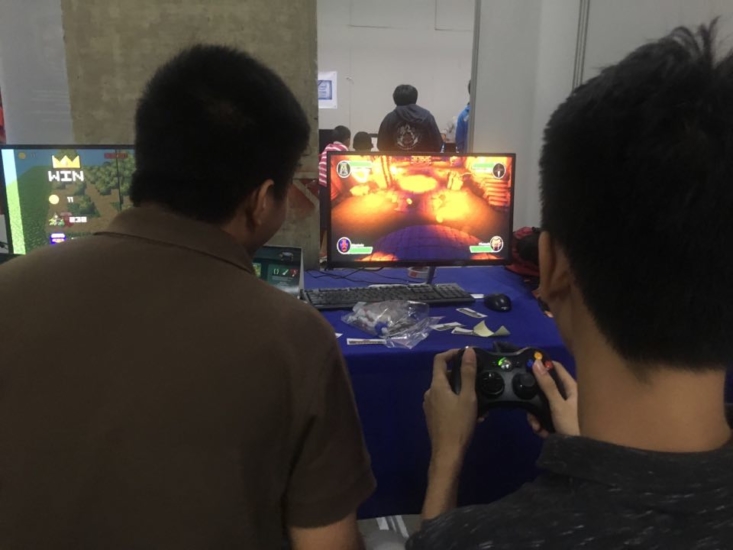 An event which is happening within ARCHCon that’s heavily related to the Cebu gaming industry is the ARCHCon Game Jam. This is where game developers from different backgrounds create one game wherein they allow the people to both play and judge how well their game’s are. The Cebu Game Dev team picked the top 5 most polished games to display within the event, and the people get to vote by placing in tokens within the respective boxes of the games that they think is the best.

While it is unfortunate that the developers of almost every game were either not present or too busy enjoying the rest of ARCHCon rather than staying still in their booths, I did manage to interview Nivelle Mendola, the head developer of the game Epic Mask Battle of the History and the man who’s a part of the game development group, Exodia.

How did you guys come up with the name Exodia for your development team?

Nivelle: Actually Exodia is based on a powerful number of cards in Yu-Gi-Oh. It’s composed of 5 parts; that would be the head, the arms, and the legs. The reason why I picked Exodia as the name is because a game cannot be created alone, while it is possible to complete it, the results are way different compared to finishing it with a team. That’s why we chose Exodia because we’re a part of 5 and without one of us, nothing will work.

So how would you describe the game and how did you come about its concept?

Nivelle: The game is a big battle royal where everyone fights it out. And the since the theme of Game Jam is masks, we made the game that’s related to the theme. So we thought that the masks were available in both the past and present so that’s why we chose characters like the luchador to represent our game.

How was the development process? Was it tough?

Nivelle: Honestly, there were a lot of problems because we weren’t originally supposed to enter this competition. The reason is because we thought we couldn’t handle it. Our 3d modeler and animator had no idea how to make the game. Only I knew what to do at that point and that’s everything from the programming to the art. So every day I had to teach them. It was really hard because these guys were just starting out.

How long did it actually take you to finish the game?

Nivelle: The game took as at least 55 days, just a bit below 2 months.

What do you think the best feature of the game is?

Nivelle: That would be the multiplayer aspect. For me, this kind of game is great if you’re playing with friends. That’s because playing it with friends is fun and it gets even better if you’re in a one-on-one situation where there’s tension when it comes to who wants to win. So we designed the game for those convention goers because there are never any loners when it comes to these people. They always have friends so the game was made just for that.

Are you happy with the outcome of the game?

Nivelle: I’m actually really happy with the game. The game had a bug that stuck around for 3 weeks until we finally managed to fix it. We’re really confident that it’s fun because we let street children test it out and they understood how it played. That’s how we know that the mechanics really worked well.

Do you think ARCHCon right now is a great chance for new developers to showcase their games?

Nivelle: Actually this isn’t the first game jam, there was one that happened during the summer but it wasn’t well known and it wasn’t here. But this is a really big opportunity for game developers because Cebu doesn’t really have this and this is the first time it’s happening. Our team really didn’t know what to do, so with the right amount of teamwork, game developers can complete and submit their game to events like this.

Thank you very much for you time, we hope to see you again in upcoming events

Nivelle: You’re welcome and so do we.

This person was one out of the 5 developers taking part in the ARCHCon Game Jam, and hopefully we see some very well designed games that people will hopefully enjoy.