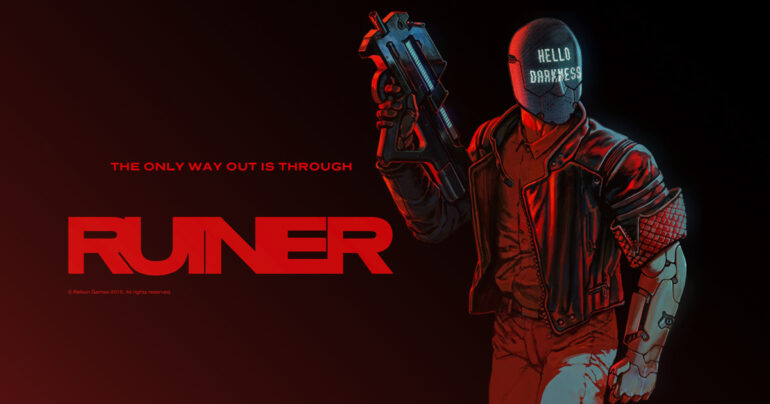 Developer Reikon Games and the street gang bosses of Devolver Digital have announced the brutal cyberpunk action shooter RUINER will hit Xbox One, PlayStation 4, and PC on September 26. The new ‘Ugly Heart’ trailer heralds in the release date and puts the spotlight on some of RUINER’s more extravagant weapons.

RUINER is a brutal action shooter set in the year 2091 in the cyber metropolis Rengkok. A wired psychopath lashes out against a corrupt system to retrieve his kidnapped brother under the guidance of a secretive hacker friend. Combine preternatural reflexes, augmented tools, and the arsenal of fallen foes to tear down and dismantle the corporate titans of virtuality dealers at HEAVEN.

“After the success of the Hotline Miami series and the impending cash money windfall of RUINER and Absolver, Devolver Digital will only publish games with masks now,” note Devolver Digital CFO Fork Parker.

Reflexes will be put to the test as players take aim at HEAVEN, the monolithic corporation behind the entertainment networks bringing people real sensations in virtual worlds. The masked hero will utilise a fantastic array of weaponry and gadgets in concert with fluid movement and tactical strikes to save his kin and discover the hidden truths of Rengkok.