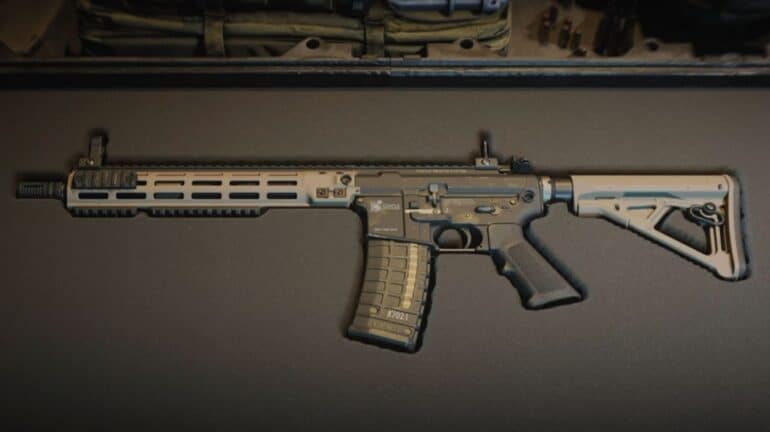 The Call of Duty Modern Warfare 2 M4 assault rifle is one of the most reliable weapons in the game. Thanks to the improvement with the Gunsmith 2.0 you now have more control with what attachments and overall setup with your guns. With the right setup, the M4 can be a beast in combat. This guide will teach you the best M4 loadout, the best M4 attachments to use, including perks.

You’ll the M4 receiver to use the base M4 gun that much is obvious. However the attachments you build from there are truly what’s going to make this gun shine.

For starters the best stock you can choose would be the Demo Fade Pro Stock. It’ll provide boosts to aim walking speed and sprint speed which is great for the run-and-gun playstyle the M4 is always good for. Pair that with the XTEN Grip to increase your aim down sights speed and lets you fire faster from your sprint. This split second boosts can really help you with those standoffs.

To boost your hip fire accuracy and recoil control, you should go with the 4mW Laser Box. This will make-or-break those split second moments where you have to kill a hostile player fast. While any optic of your preference can do, besides the base iron sights, we suggest going for the Cronen Mini Red Dot which is simple and basic enough for mid to long ranged firefights.

One of the biggest drawbacks of the M4 is the recoil so you’ll want the Tempus Hightower 20″ Barrel which boosts significant recoil control, better damage range, bullet velocity speed, and hip fire accuracy. This is by far the best attachment for the M4.

Here are the best equipment to pair the M4 with:

The X12 automatic pistol is a handy secondary which provides a backup in case you’re low on ammunition or need to reload and are in a tight spot. It does its job better than any other secondary pistol in the game.

The Semtex and Stun grenades are great lethal and tactical options. In a game with an incredibly low time to kill, the Stun Grenade is an automatic death sentence. The Semtex isn’t a bad lethal choice but you can replace it with other grenades of your preference which won’t affect this loadout.

The Battle Rage is a great Field Upgrade choice. For a limited time, you’ll be able to sprint faster allowing you to get to a fight quickly or escape your enemies. That fact that it helps regenerate your health helps increase your longevity to keep fighting.

E.O.D. and Double Time are great perks to pick. Increased resistance against explosives and second wind when it comes to sprinting. You’ll be able to enter and exit fights with better ease and won’t have to worry about grenades as much.

Fast Hands are exactly what they’re meant for. You’ll be able to reload quicker, swap weapons faster, and use any equipment faster. In a game where you can die in a split second, the ability to pull out your X12 faster than the enemy can reload can be a deciding factor.

The Ghost is still one of the more useful perks in Modern Warfare 2. It conceals your presence from UAVs when moving around. Very useful for attacking behind enemy lines.

Check out this Youtube video from Hero who shows off a setup for the M4 that is utterly broken.