Call Of Duty: Modern Warfare Reveals Details On Season One 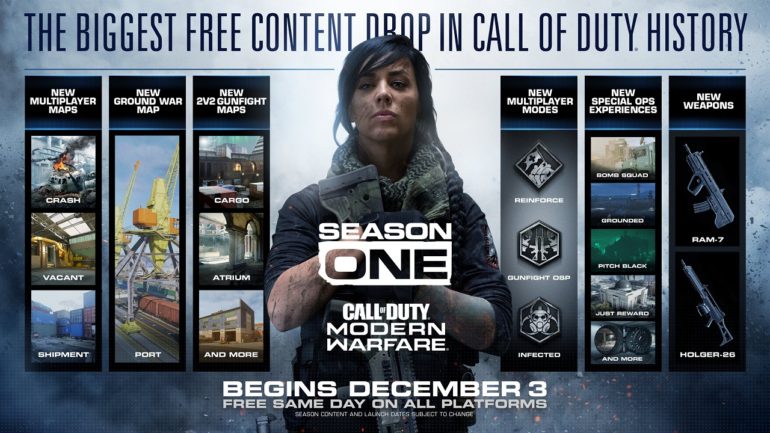 With Activision’s plans for releasing free content to all players, Season One will be launching next month. It will have a lot of content for players and it will be launched across all platforms on Dec. 3. Some highlights of the upcoming DLC include classic maps from Call of Duty 4: Modern Warfare, a new Ground War map, new Gunfight maps, modes, Spec Ops missions, and weapons. As Activision puts it, this is the biggest free content drop in the series’ history.

There will be three classic 6v6 maps from the fourth title of the series like Crash, Vacant, and Shipment. Hopefully more classic maps will be making a comeback in this title later.

A new Ground War map called Port will be added together with multiple new 2v2 Gunfight maps. They are listed as Cargo, Atrium, and many more.

There are three new multiplayer modes Reinforce, Gunfight OSP, and Infected. Reinforce is a combination of Domination and Search and Destroy. The goal is to capture flags while staying alive throughout the round. Players will only have one life for this. Gunfight OSP or On-Site Procurement is a spin-off of the normal 2v2 Gunfight. It has a twist where players collect the weapons around the map instead of spawning with them automatically. Infected is a classic multiplayer mode that pits Survivors against one player with the goal of infecting others.

New Spec Ops missions will be added too, which will introduce new intense scenarios for players to overcome with friends. There will be four new missions called Bomb Squad, Grounded, Pitch Black, and Just Reward. Activision and Infinity Ward promised to add more content for Spec Ops throughout Season 1.

Two new weapons will be introduced called the Ram-7 and the Holder-26. Ram-7 is a fully automatic assault rifle and the Holger-26 is an LMG with an integrated drum magazine, which is perfect for dishing out more ammo. These are being added as part of the Battle Pass system including new cosmetics and the tow base weapons.

Call of Duty: Modern Warfare is already available on PlayStation 4, Xbox One, and PC.