Champion Hill is Call of Duty: Vanguard's glorified King of the Hill mode. 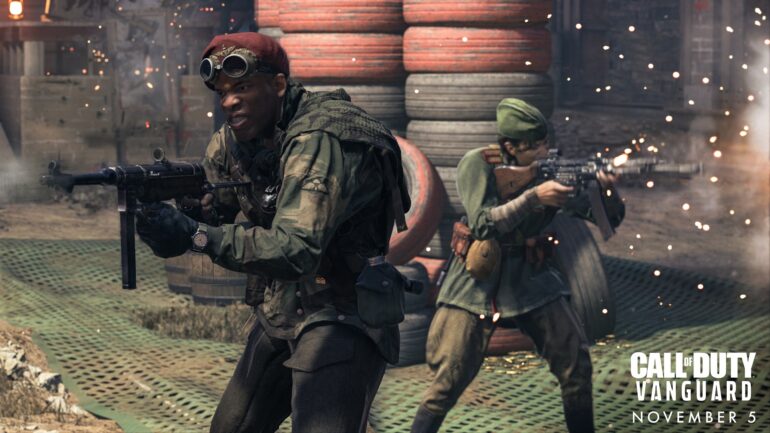 Sledgehammer Games is back tackling World War II once again. Some may have gripes about the decision as Electronic Arts and DICE are going for a semi-futuristic warfare set in the year 2042, but Activision and its crew are not shying away from giving players the M1 Garand and the BAR in their hands. And with the recent closed media hands-on event with Call of Duty: Vanguard‘s new mode called Champion Hill, all I can simply say is it’s a glorified Round-Robin, King of the Hill mode.

During the start of Champion Hill, all of the players will spawn in the safe zone to buy weapons like the Thompson and BAR, perks like Double Time and Ghost, equipment, and support materials such as armor plates and spy planes. You earn cash to buy weapon upgrades too and all those goodies by eliminating other players or by looting cash from the ground scattered in the arenas. There will be 8 teams in total regardless if you choose duos or trios.

Each team will have 12 lives in duos (18 if it’s trios) and every round will last a full minute. Every time you get killed, that’s one less team health point, bringing your team to get eliminated early. The last team standing will be considered the winner of Champion Hill.

Teams will face off in four different small arenas simultaneously where they get to either survive or get eliminated. These arenas are the Courtyard, the Airstrip (which is by far the largest one), Market, and the Trainyard.

2 versus 2 poses a challenge for players who aren’t playing with friends. You are either the fodder or your teammate, if you fail to communicate with your squadmate then you are destined to lose. And that’s what I had during my playthrough in the hands-on event. My teammate and I didn’t talk throughout the entire session, and with the lack of a ping system, it was difficult to know where the enemy was. I had to rely on my ears, and luckily enough I used a solid pair of headphones — the Pulse 3D Headset.

Since I have been away from playing Call of Duty games for months now, the TTK (time to kill) became a problem for me. Playing too much Apex Legends made me reliant more on going toe to toe against an enemy player with pure recoil handling skills.

Vanguard is different, and the time-to-kill and unpredictable gun recoil were mechanics I had to quickly adapt if I wanted to rack up my kill counter and secure those wins. Every start of the match, the unfamiliar territory had become my greatest enemy as other players managed to easily take the shot to bring me down. It wasn’t a good feeling, and I had no one to blame but myself.

I went on for a few more rounds regardless of the outcome to adjust my reflexes and map awareness, and by the time we started the second session, I began to secure kills and even winning the entire Champion Hill twice in a row. The movement at first felt weighty, like panning the right analog stick was just too slow. By simply adjusting the horizontal and vertical sensitivity to high made me feel something so familiar — my muscle memory kicked in, and everything felt so smooth and responsive. And that’s when I got myself to say: this is still a Call of Duty game, alright.

The fast-paced, arcadey feel is still there and even got intensified with Champion Hill. I’m immediately pumped when the round starts, and I automatically rush towards a glowing gold token in the center of the map to get that extra life in the Market map, but sometimes getting killed after picking up the token is like preventing the other team from getting their dirty hands on an extra life since it only spawns once per round.

Saving up the cash you earn from each match to recuperate from the lives lost during a round aside from picking up life tokens was so helpful. Deciding where you spend what you earn is also a big factor as weapon upgrades are also essential in Champion Hill. With a simple press of a button, whether you’re in a match or in the buy zone, it makes upgrading your guns convenient and I love it.

The adrenaline-packed team deathmatch games I had in Call of Duty: Modern Warfare, both 2008 and the 2019 reboot, are still here. With tight smaller 2v2 maps, it heightened the overall experience, and believe me Champion Hill is exhilarating as it can be.

I would like to say a special thanks to Giancarlo from Gadget Pilipinas for that awesome second round, we certainly nailed that win!

Champion Hill is just the tip of the iceberg, and there is still so much to look forward to on Call of Duty Vanguard when it launches later this year in November on PS4, PS5, Xbox One, Xbox Series X|S, and PC.