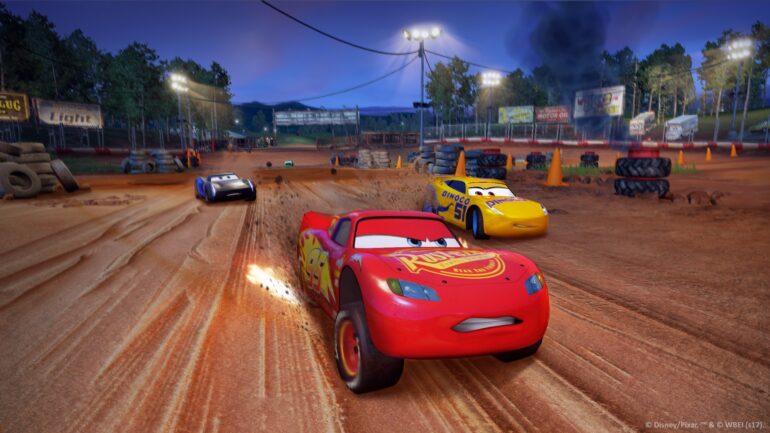 When you’re up for racing simulators with some additional flavors to spice its enjoyment, Cars 3: Driven to Win delivers that in certain aspects. Avalanche Software, now recently acquired by Warner Bros. Interactive Entertainment, delivered a 1st-runner up title than a Cup Series champ.

Before I’ll begin my daring review, please do note that I have never played the prior installments of Cars. Although, I did some digging about what the first two Cars game offered, so I wouldn’t be totally clueless about the things I’m going to mention.

[And at the time of this writing, I just started playing Cars 2: The Video Game after completing Cars 3: Driven to Win]

So, let’s rev up that engine and move on to the review now, shall we? 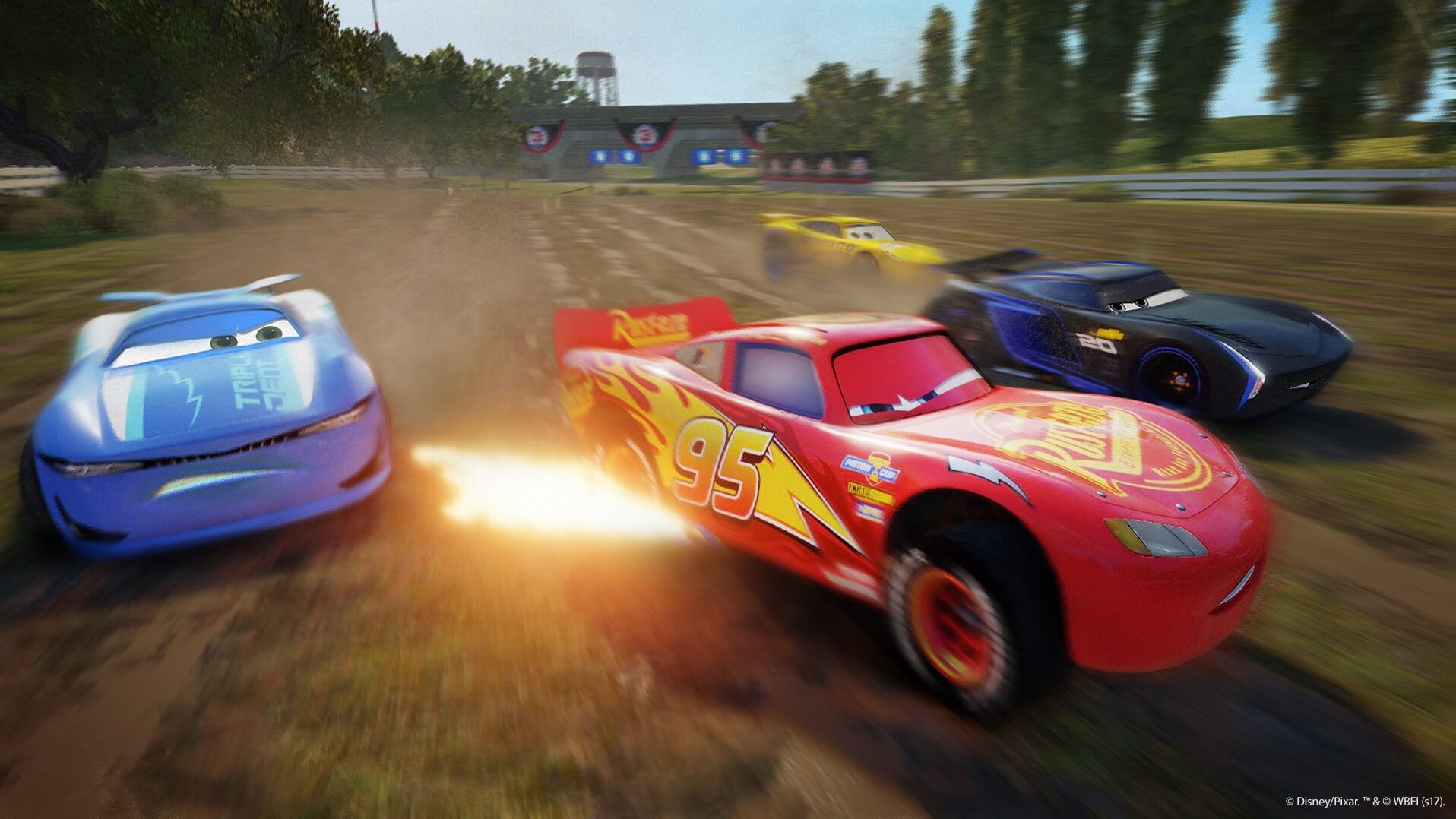 Cars 3: Driven to Win lives up to the core mechanics of Cars 2: The Video Game. Unlike the first installment which had an open-world gameplay, this latest title in the Cars franchise focuses more on racing than adventure. You kickstart your engines in a seamlessly simulated mountainside environment where your good-ol’ famous and confident Lightning McQueen goes in a little roadtrip with his buddies while teaching you the very basic of how you should drive your car – jumping, steering, and boosting; then the game throws you in your first effortless 1-lap race.

After that simulated race among the considered legends, a longtime time McQueen rival is the host of RSN, Chick Hicks. While introducing Jackson Storm, the black custom-built racer who snatched McQueen’s title in the film, Lightning is in a daring challenge to have another face-off with Storm. However, McQueen needs to do “warm-up” races before he gets his one last final race with Storm – which is ironic, because the “warm-up” statement is technically accomplishing huge amount of “Skill Check” points from race events.

There’s not much plot involved as it’s not entirely tied-in with the movie. It’s considered to be like a mini-sequel after the events in the Cars 3 movie. Unlike the previous installments, which is more focused on its story roots from the film, Cars 3: Driven to Win only gives you the typical racing simulator where you have to just simply unlock events, cars, tracks, and boss stages. 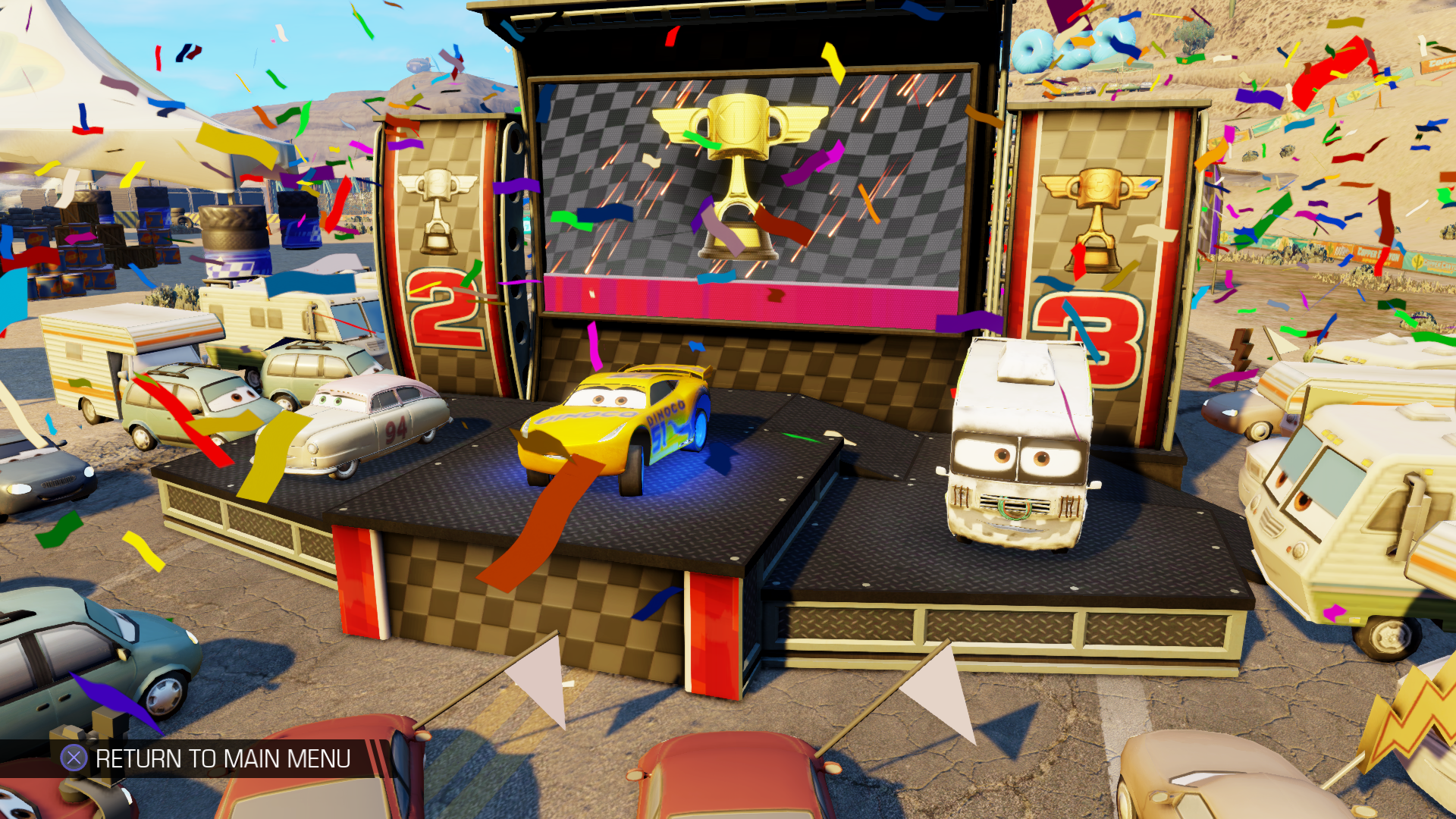 Cars 3: Driven to Win compliments its subtitle as the game focuses more on race events, cup series, and boss showdowns. Avalanche Software didn’t lose its touch of how fun the game can be especially with friends. Still, they didn’t learn that one mistake they had in Cars 2: The Video Game: the lack of online feature. The variety of game modes and magnificent tracks are darn too good to not have any online multiplayer. I find the lack of this feature a big setback for Cars 3: Driven to Win. Its core gameplay mechanic fits perfectly with multiplayer; while they still do have split-screen as a replacement of an online mode, the experience and fun factor you get online differs by a huge margin.

There is this checklist of challenges you have to complete called as the “Hall of Fame”. Ranging from drifting in the air to doing back-drives successfully, they are filled interesting with moments. But it does come in flat and it somewhat lacks its appeal other than being literally a “checklist” to unlock bosses, cars, modes, and tracks. Although it’s understandable that in this type of arcade games, there’s nothing much to progress aside from beating challenges, that is why Cars 3: Driven to Win relies more on its tracks and modes to entice players.

Cars 3: Driven to Win features 21 uniquely crafted race tracks. I have to say, it provides a lot variety when you do races, and there are shortcuts you won’t even expect that exist. In the Heartland Riverside Dash track, there’s a pathway to a ramp at the left-side after passing through a moving train that leads you to a roof which gives you a huge lead advantage. I’ve been racing in this track for a couple of times, and not until my 7th playthrough is when I discovered that nice shortcut.

Although I love every track, I find the Arizona’s Copper Canyon Speedway epic. Why? Because at the start of the race, fighter jets fly over then dispersing line colored smokes which fills my racing adrenaline. Aside from that, the tight drift areas in Copper Canyon are made to let racers drift from one curve road to another, and the desert-themed environment also adds the intensity of the race even more. 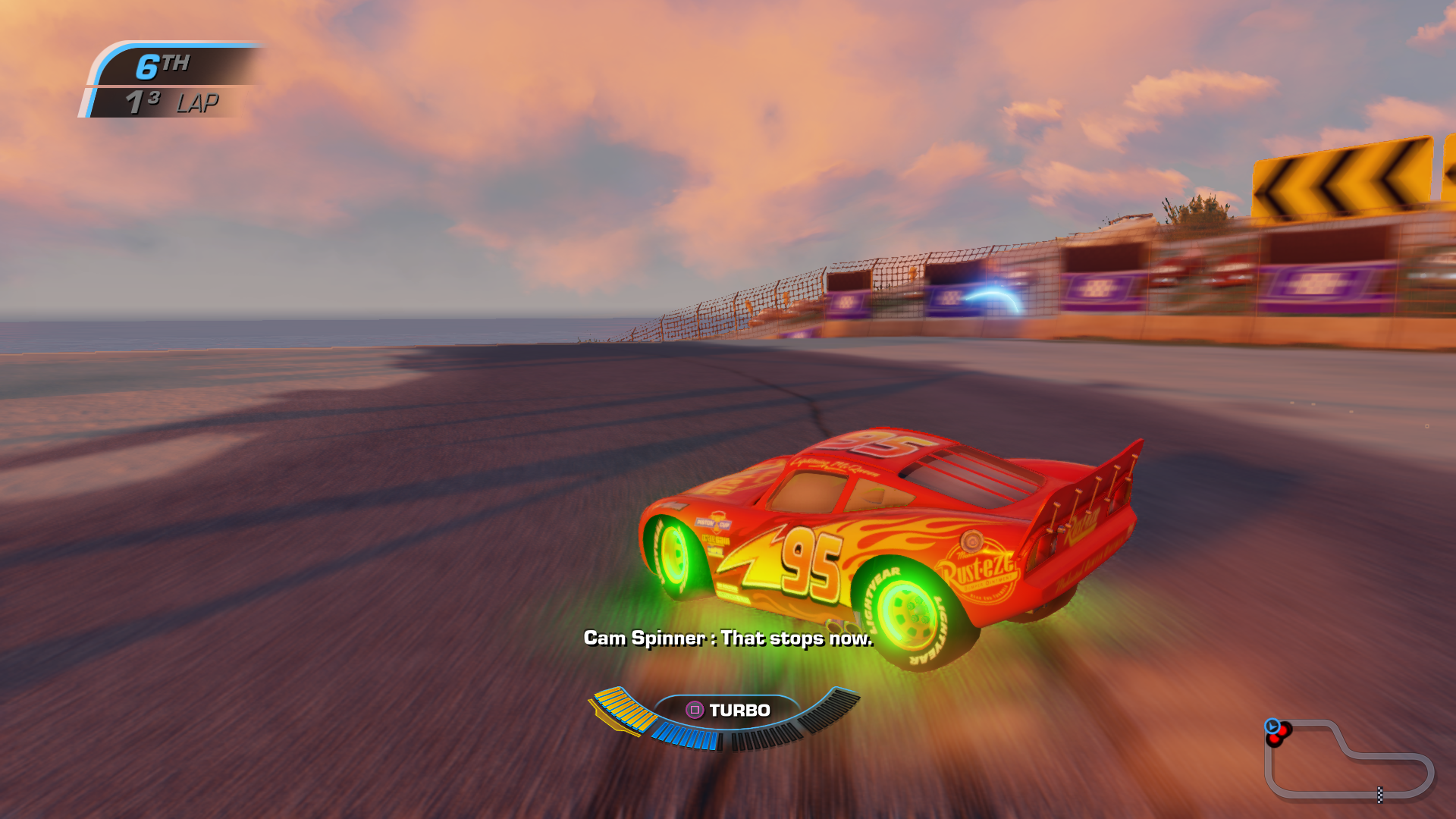 In the game, players can switch between modes after unlocking them with the Skill Checks. I find this a poor approach in its progression system. Unlike other arcade racers, players are forced to do a couple of “races” first to gain Skill Checks to unlock certain modes that should have been available from the start. A good example of that is the Thomasville Playground. Even though it is served to be as the “free roaming” track with challenges to spice everything up, it’s also your training grounds where you can hone your skills to perfect those drift turns, jumping ramps, and back-driving.

The modes in Race include Battle Race, Stunt Showcase, Takedown, Best Lap Challenge, and Master-Level Events. There are similarities from Mario Kart and Crash Team Racing in Battle Race. If you never played any games like these, Battle Race is what you call the mode with bazookas and traps.

Players get to slow down their opponents’ progress in the race using different kinds of weapons. Chaingun? Sure. Rocket launchers? Uh-huh. Traps? Booyah. With no speed and armor advantage of the cars you choose, this mode loads a decent amount of entertainment when playing with others. However, it gets irritating at some point since shield pick-ups are absent in the game which causes you to get bumped down to second of third-place.

This happened to me in the Master-Level Event where I had a race showdown with Miss Fitter, the cranky old school-bus, where I got totally abused by rockets, chainguns and bombs every time we’re almost at the finish line – imagine, this was on Easy mode, how much more if I crank it up to Medium and Hard. Don’t get me wrong, I’m good at racing games like CTR, Need for Speed, and Mario Kart, but Cars 3’s AIs are insanely good.

I’m even impressed that the controls were smooth enough when you’re simply racing, but when it comes to side-sweeping tricks and drifting, it becomes a bit complex and difficult initially. The game encourages players to pull-off styles like two-wheel side-driving and drifting when you pass through blue waypoints strips to fill your turbo meter a lot faster. Although it’s quite fun to flip around and drift like crazy, it gets annoying fairly quickly when AI controlled racers just beat you to the finish-line because you weren’t able to gather that much turbo power from all those tricks you did. 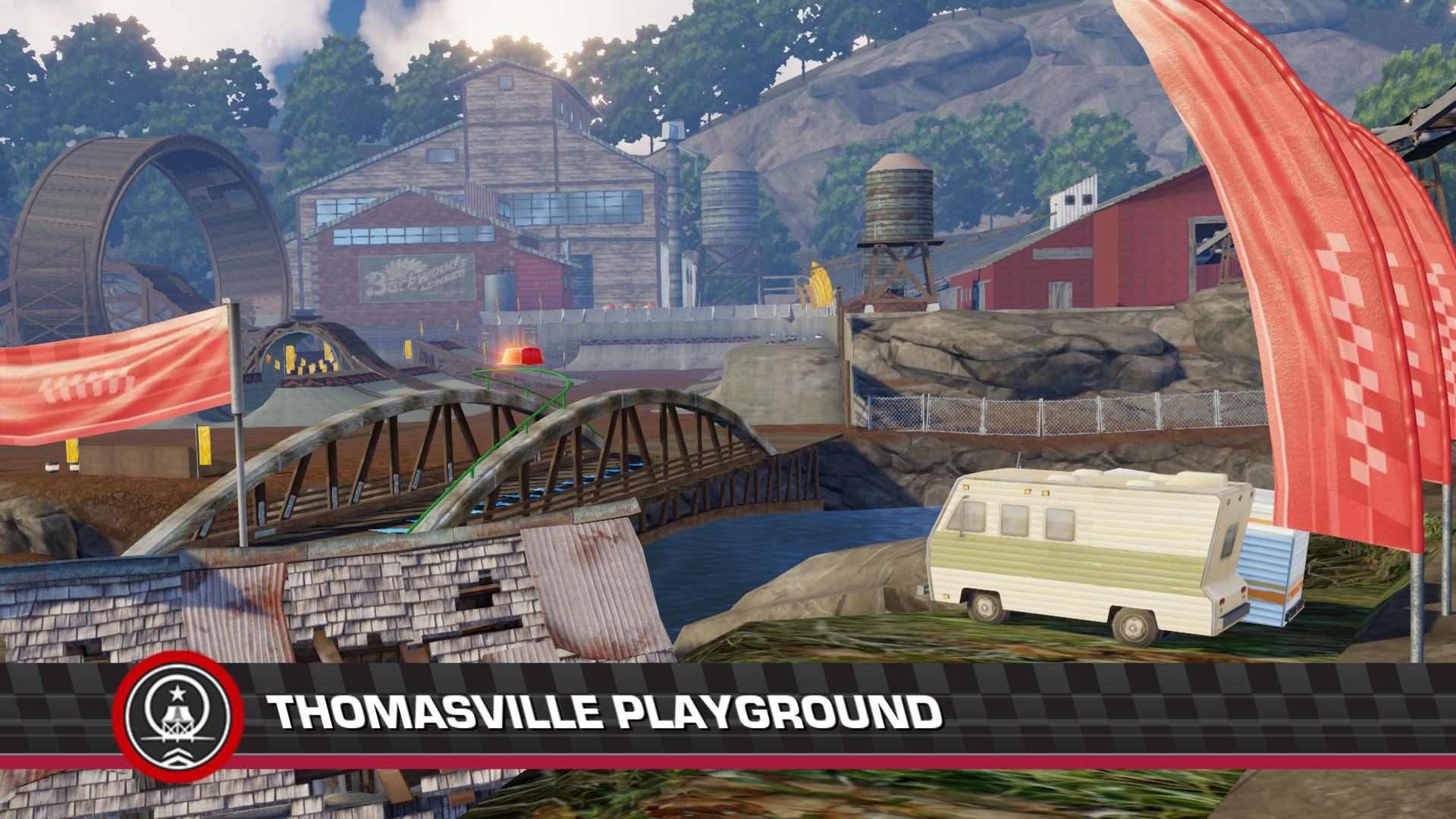 At the game’s core, Battle Race is certainly my favorite, I want to include Master-Level Events but this is more of boss stages than a “mode”. Modes like Stunt Showcase, Takedown, and Best Lap Challenge feels more like a filler. Stunt Showcase is similar to generic race modes without weapons where players have to focus on doing robotic flips in mid-air while popping floating balls to get a multiplier. While Takedown is more on blowing up a lot of cars before the timer runs out.

These modes are quite generic than I expected them to be, and this is why I’m quite disappointed they took out Disruptor Events that was in Cars 2: The Video Game. I know it’s logical to remove the mode since it doesn’t fit right well with Cars 3’s current events, but maybe giving a patch update that will include this mode will surely be blast for veterans who loved the games. Other modes such as Cup Series and Sponsored Team Play offers little variety as it just uses the same Stunt, Battle Race, and Takedown modes in the form of “succeeding events”.

Speaking of lack of variety, customization is not entirely in-depth as I thought it would be. You can unlock color packs that includes different horn noises, light colors, and turbo flame colors. The promised “unique racing adventure” with its customization from its launch announcement was nonexistent, which is quite upsetting really. But even with the lack of depth, I find the neon light effect on the characters wheels visually nice especially when you drift. At least there’s something that can be adored. 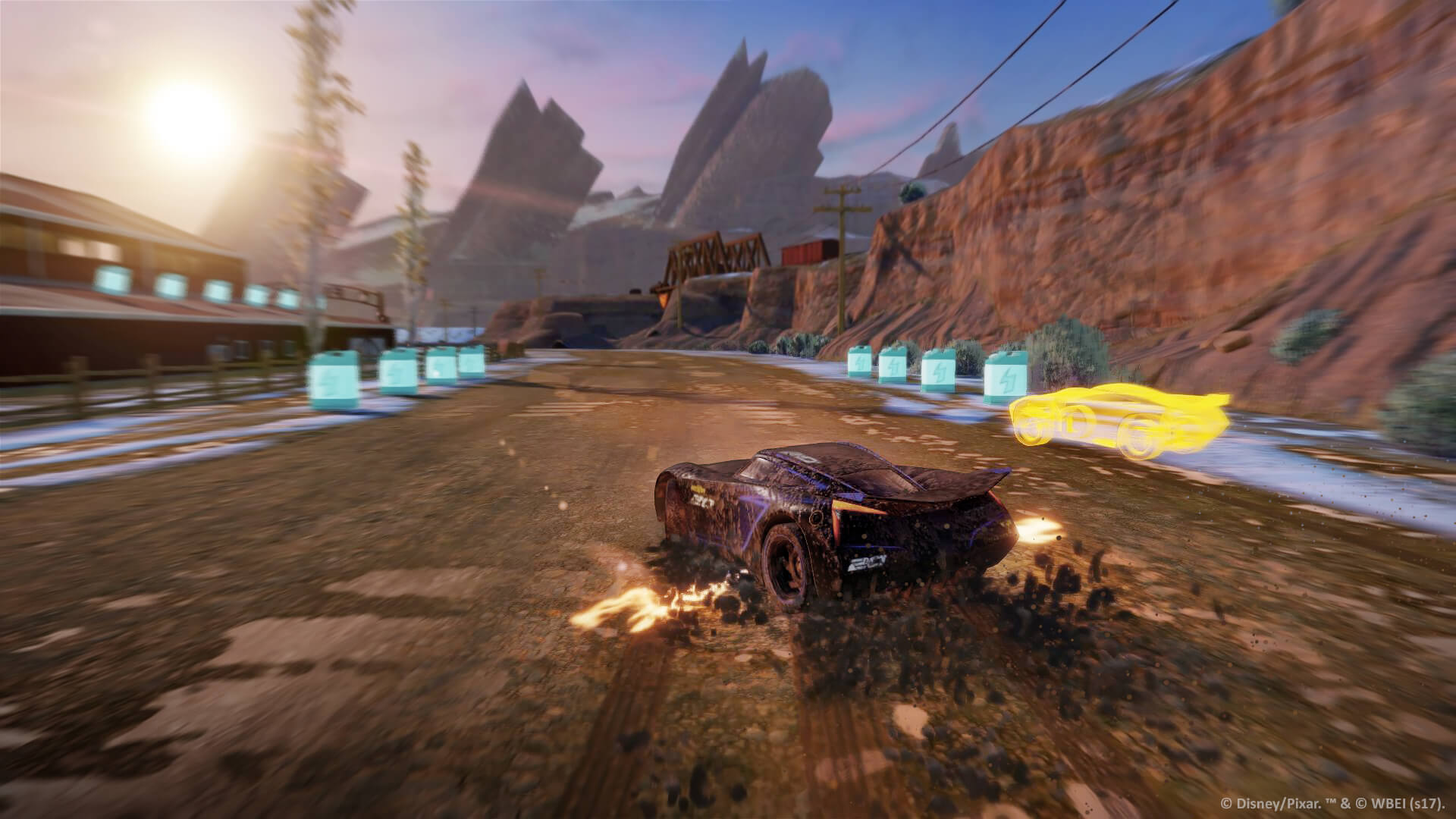 When we talk about the visuals, Cars 3: Driven to Win is a small improvement from its predecessor from the looks of it. Cars 2: The Video Game did have impressive visuals that can closely stand alongside with its movie, and Cars 3: Driven to Win is no different. However, there are some assets like decals, reflections and parts of the environment that are rendered in low-level quality detail despite the game running on a PS4.

The dialogues when race events finish are great sometimes, especially when commentators start to mention your character’s name if you hit first place or at the bottom of the lost. Sadly, the responses that comes after that are bland, repetitive, and sounds scripted. Chick Hicks asks certain characters for comments who didn’t participate in the race who just gives out vague responses like “we’ve seen better but there were interesting moments in that race” then wraps it up.

But look at the bright side! It’s fun to play Cars 3: Driven to Win using characters like Mater and Guido since both of them are technically slow in the movie, but in the game, players will definitely enjoy teasing their friends with “HA! You’re beaten by a scrap pickup tow truck, take that!”

Cars 3: Driven to Win does have its own merits and can be enjoyed for a short amount of time when playing it alone, and playing it with friends is worthwhile. With the lack of online features, it gets boring and dull and repetitive all throughout when you’ve finished all Skills Check challenges and defeated all 4 bosses. I’d say, Cars 2: The Video Game is still the best one in the series despite it rejecting online play. 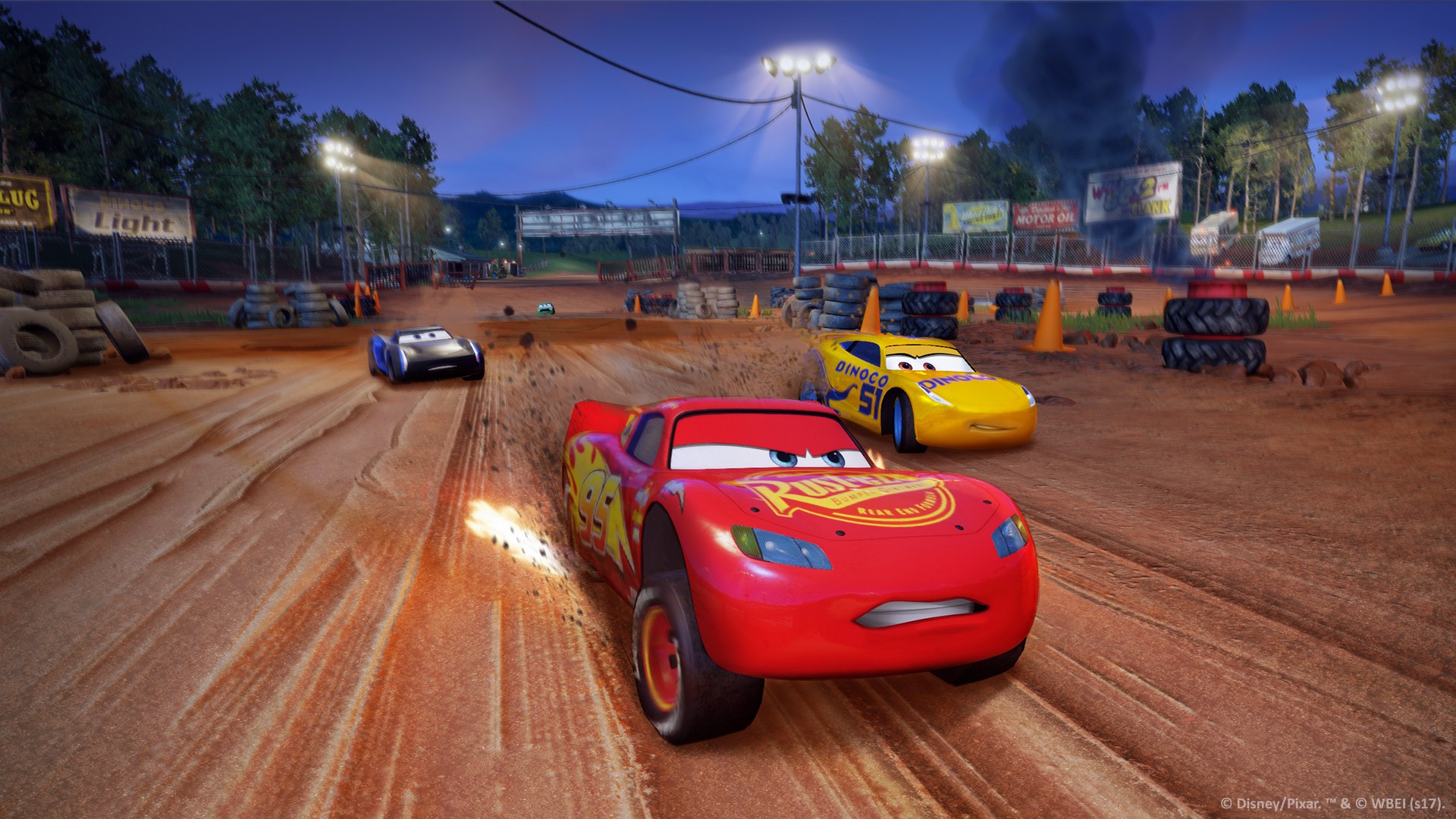 Score Definition
You better have to choose if it’s worth spending your spare cash, because it might not be the game for you and it might be for others.
Pros
Lovable Race Tracks
Splitscreen Fun with Friends
Controls are smooth
Voice-acting is spot-on
Cons
Lack of online play
Gets boring and dull quickly
Runs 30 frames-per-second
6.5
Justified