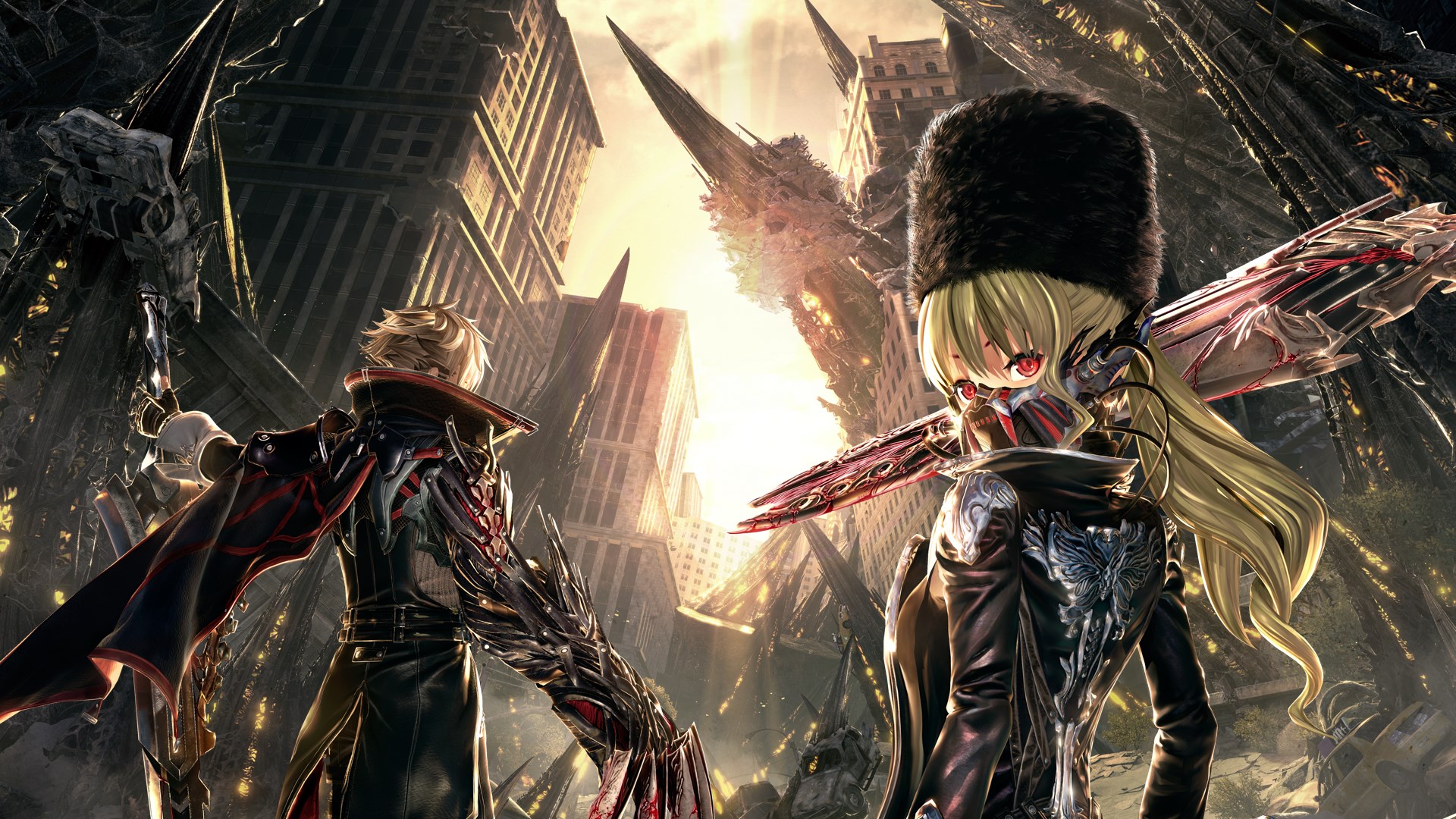 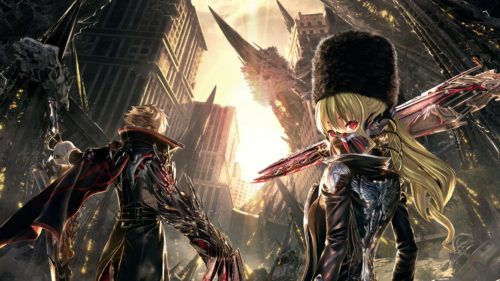 Code Vein is set in a post-apocalyptic world where unknown monsters (surprisingly looking like monsters from God Eater) roam the land and a certain area is surrounded by a red mist. Inside it, a few humans live while thousands of resurrected humans called Revenants somehow rule over it. The latter are also vampires that need to feed on the blood of humans, but aren’t afraid of the sun and might go crazy if they don’t drink the red liquid when they are about to frenzy. They become the Lost and they attack anyone, even fellow Lost, in order to slake their thirst.

The protagonist is one of the Revenants and is trying to piece back together with his memories, help a few good Revenants along the way, and try to survive the day as they look for white fig trees that grow blood beads. Blood beads are supernatural fruits filled with, you guessed it, blood. It’s the best alternative for drinking blood than just feeding off humans.

I have played so many games in my lifetime and only a few of them have made me empathize, nay, cry due to the emotional narrative. This game has definitely tugged on my heartstrings and might have made me tear a bit. The main story as a whole is the usual “be the main man, save the world, bring happiness to everyone” type, but it’s the individual character stories that make me emotional. Each of the revenants has a very, very rough past and you are shown some scenes of it, but enough to make you connect the pieces.

Each Revenant in the game has somewhat forgotten their past and you, the protagonist, find certain red spiky crystals along the way. You pick them up, your female white chick purifies it for you, and then you enter the crystal, which contains the memories of that Revenant. You also gain special abilities after watching the whole thing. The scenes that show their memories don’t actually, but it is depicted enough that you would know what’s going on. It is also told from the perspective of that said Revenant. It’s actually a good way to show a story. It doesn’t try hard enough to show animated stuff to make you go wow, it just makes you imagine what it could really look like with just a few hints of the scene. It’s very creative in my opinion. This is, in my opinion, where the game shines the most.

Code Vein’s gameplay is, as I said, a mix of Dark Souls and God Eater. It has the difficulty of Dark Souls, which contains enemies one-hitting you, you fall in a lot of pits, tight spaces to fight, large monsters to fight, stamina to maintain, and several types of weapons to choose from. The God Eater aspect of it is its weapons and blood veil upgrades, the 3D anime visuals, and the “devour” mechanic. Blood veil is the jacket you wear during your adventure and it ups your stats and sometimes gives you special abilities.

If you are having a bit of trouble with the game, check out our basic tips here.

Another part of Code Vein that it shines so brightly is the very detailed character creation feature. It has tons of options to choose from and so many things to change! The number of options is absurdly big, from hair, eyes, mouth, face shape, body build, accessories, gas mask frame, gas mask, accessories, and more. The variety of colors to choose from are so many and you have the freedom to choose whether your character would go totally black, or even have green skin. It is that bonkers. There is also the option of the pre-made characters, of course, and from there you can customize it a bit to save more time. I’m already thinking of making another character, but I’ll do everything from scratch. Other players said that it took them hours to finish customization before they got into the meat of the gameplay.

If I would compare this full version of Code Vein to the one I’ve played on network testing, this one had better gameplay. Enemies can now feel the brunt of the attack compared to the past that if I tried to slash an enemy, it felt like slashing paper. This time, it felt like you were trying to get through the muscle and the Lost would stagger a bit after getting hit. Enemies with heavy armor might not get staggered but it felt like I was hitting iron, or scraping it with my weapon. I can’t explain it too well, but it felt like that.

Companion AI is actually helpful in Code Vein compared to other games. They actually assist you in battles, save you in critical moments, and shield you from harm if your HP is in the red. There’s just this annoying part where the companion constantly talks about something. At first, it’s informative, but it later plays on repeat. Japanese dubs help a lot, the English voice acting is fine, but putting it on repeat will get annoying later on. Coming up on a corner? A comment from your companion. Going back to that same corner? Play repeat with the same dialogue. It’s just a little complaint though.

Each area has its own level cap, so yes enemies will not suddenly come up to your level if you level up. If that area has, let’s say level 5, then it stays that way until you complete the game. In order to fight higher level Lost, players will have to travel to other areas and defeat bosses to gain access to another. The bosses are definitely a challenge, but the Lost mobs are quite difficult as well if they come in a group. All in all, every single enemy is a challenge, which is why I always prepare. Grinding for upgrades is the best option for this game.

The home base is a cozy place to stay too. You can upgrade your weapons and blood veils here, buy consumables, purify the Vestiges (memories), listen to hardcore rock by Vamp on stereo, take a bath in the outdoor hot spring, and just sit down and chill on a chair. You can also interact with the map here to find out where to go next. This is also where you can change partners and talk to them for hints, emotional support, and anything else under the weather.

The music is pretty dope in Code Vein, which is combining dramatic opera with heavy riffs. The sound effects are solid too that my speakers were booming with every explosive attack, shot, explosions, and anything else that would make a loud sound.

The visuals are gorgeous and heavy in this game that I noticed my PlayStation 4’s fans were constantly trying to cool it in very visual-heavy scenes. I played this on a PS4 Slim, so I don’t know how it’ll fare on the PS4 Pro. I didn’t get a crash in the playthrough though, which is a good thing. Overall, it’s a very beautiful dystopian-themed game.

Code Vein also gets plus points for having a high-value replay feature: new game plus. After completing the game, you get bonuses for it, but I won’t give you guys specific details of it so find out yourselves. I can say it’s a very rewarding feature and I have high praises for a game who can do justice for such a replay feature. The ability to grind with separate dungeons is another good replayabilty feature it has. You can visit these “The Deep” dungeons once and defeat the final bonus then replay it again with the boss revived. It’s great for grinding experience, practicing for future difficult and unpredictable bosses, and farming for rare materials.

The online feature in Code Vein is also similar to Dark Souls. Players can invite only one guest Revenant to their game and fight through an area until defeating the area boss. After that, the multiplayer mode ends and they log out your game. You can also join in with other players as well. That’s the sad part though: only one player gets to join, not multiple compared to the God Eater games. Maybe it’s too heavy for their servers to keep up with numerous players with this game.

Code Vein for me was a great game to play from start to finish and would highly recommend it to players who love the Dark Souls franchise. I would definitely keep a physical copy when I get a chance and replay it again. Great for solo plays, a bit okay for multiplayer.

Disclosure: This review is based on a review code provided by Bandai Namco.
Tested on: PS4