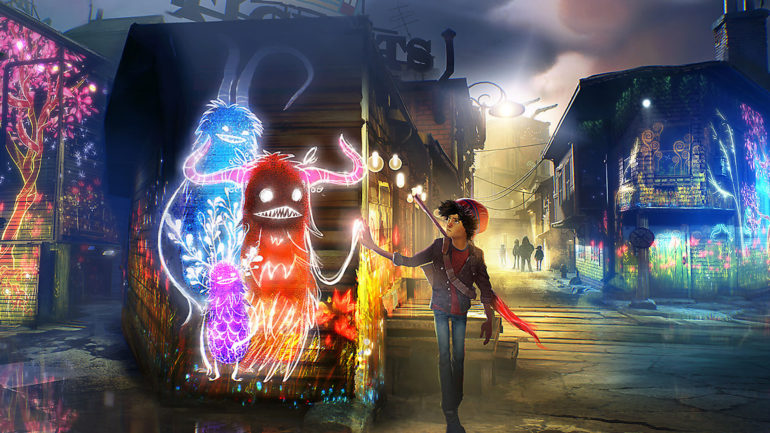 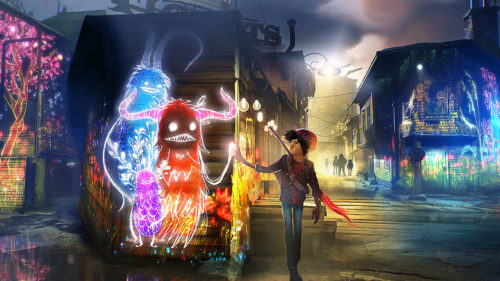 I certainly am sure that I am not the only person who watched E3 this year that got mesmerized by what this video game has to offer to its audience. Trailers and gameplay show magical colors in combination with enchanting art. Concrete Genie is a single-player, action-adventure where you control Ash who previously lived in a small fish town called Denska.

Denska is not the town that Ash remembers. From a bustling, colorful town to a lifeless city littered with bullies and repulsive vandals. To cope, Ash expressed his loneliness through sketches of monsters on his books but little did he know that soon after he will be granted a very special brush to paint back the lost colors and save the city before its too late!

The concept of the game is truly special. Something I haven’t seen in any indie games so far. Although battling with bullies is quite mainstream nowadays, the approach for this game is different. Dealing with them means distracting them from afar, climbing rooftops as they can’t catch you there and you didn’t have to resort to violence. Surprisingly, you will get to know them a little better as you progress through the story and realize that they are just victims of their own circumstances too. I honestly hate bullies and I’d rather kick their behind but hey, I am not mad at this approach at all.

The sketch mechanics is reaaaalllllyyy freakin’ awesome! It’s a fantastic animation that features uniquely created 2D characters walking around on the surfaces of a 3D world. There are two types that you can create in this game, graffiti on the walls or a monster which is called a Genie in the game. Players will only have designated spots where you can create Genies but sketching your art in walls are endless! Simply choose a design you like and use your controller to move in on the direction you want and voila! Your art is on the wall. What I like about this is that you can never create ugly arts. I tried just choosing random pieces and putting them together but I ended up liking them. I never had any creative cell on my body but I tell you, I felt so proud walking around town looking at my dazzling art on the wall. I now know how an artist feels when he walks in his own gallery. It must have been exhilarating.

Genies are a different form of art as you can make them horizontally, vertically or just a splotch on the wall. Then you can add details as creative as you can. Although there are is a limit to how many details you can add, still, the end result is fascinating. No Genie is ever the same and they always look cute when you bring them life. Genies also take up different elemental forms and you will know what you’ve created by their colors. Red ones have fire abilities, Yellow ones are electricity and Blue ones are for wind. Each of them will have their own advantage in navigating through Denska and every time they do their little magic – it really looks awesome. They feel like your babies and it makes you proud when you make them happy and see their gifts.

It astounded me when Ash has the flexibility to jump through roofs, climb walls and expertly jumps from one hanging bar to the next. Especially when you needed to chase down blueprints or Genie designs. Both are a little reminiscent to Assassin’s Creed Almanac and navigating gameplay but I really don’t mind at all. It’s like looking at a young Altaïr in a modern but dead tiny town. Unfortunately, though the clunkiness also got copied from the AC Series to the game itself. Ash had difficulty in grabbing some roofs and climbing some boxes which made me a little wary at times when escaping from the bullies. There will be a little combat involved in the latter part of the game and aiming could really use some work as you can’t change camera angles. Evading is okay but that floor sliding using your brush is just really an adorable addition.

Aside from always creating that beautiful art, the process of creating it is a delight in itself. Every time you draw something, music follows your every stroke, that apple you placed near the dandelions created a soft tune that does not only hypnotizes your sight but also your ears. A smile never escapes me whenever I create these masterpieces but its more enjoyable when you have a lot of designs collected to add variety. So if you’re lazy and don’t collect as much then you will be stuck with few designs and it may get lame the more you create these arts. It is best to collect as many as you can, especially on the roofs and they can also be uncovered from hidden lockers or dumps so always explore every nook and cranny.

I had so much fun with this game and it will only require 6-8 hours of gameplay for you to finish everything. But if you are a careful artist then it may take longer as you want to cover every corner with your precious art. The feature that I would like to be on it is to zoom in on Genie creations. I like creating them as genuinely as possible and these details cannot be seen up close. So you will have to rely on making them bigger or else you won’t really see the detail you placed which is kind of a bummer. The camera mode is not something I am crazy about. I would have liked Ash to have a bit of personality by changing his poses or interacting with this environment rather than just staring blankly at the screen while his beautiful creation is glistening at his back.

I was also surprised, but not in a good way, when I encountered a glitch in the Hydroelectric Plant. I won’t say too much but there was a blocked entry there where I needed a new type of Genie but will be only allowed to create one once I completed that part of the map. But for some unknown reason, I was able to get through the entrance and into the Sub Waterway Systems and I couldn’t get back out since it should’ve been blocked in the first place. Good thing I did a manual save and didn’t really have to do a lot of catching up to get to that point.

Overall, Concrete Genie is such a great medium for educating children on the effects of being a bully and practicing their virtuoso skills at the same time. Parents won’t have any problems with language nor content. Casual gameplay that will make you blissful most of the time. A Storyline that will keep you wanting to discover more, not just the characters back story but what happens eventually when you save Denska. I am displeased with that glitched pathway and awkward parkour movement but overall I still enjoyed the game and I understand loud and clear the message it wants to shout to its audience. 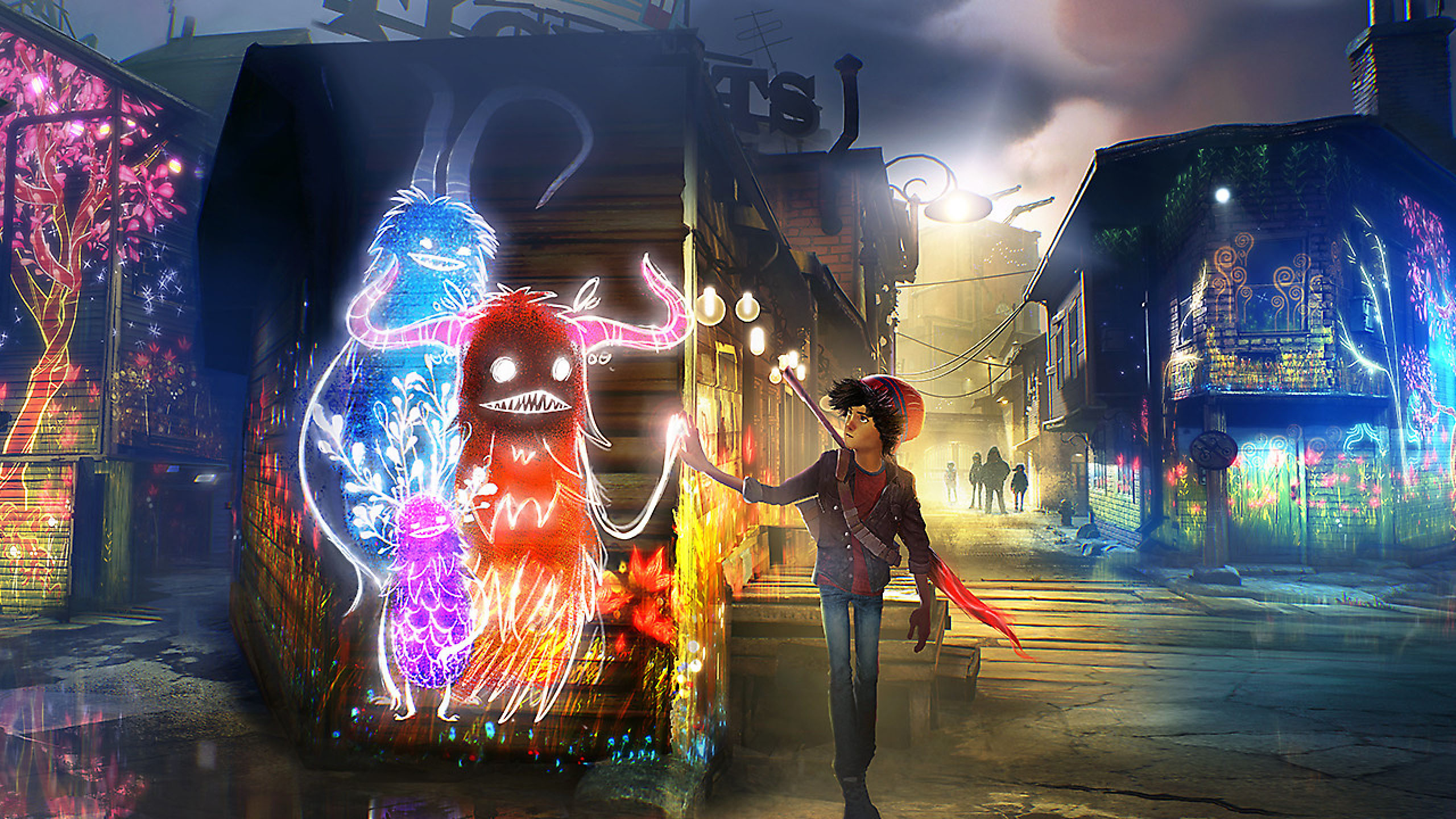 Concrete Genie – Review
Score Definition
When the issues of a game are rolled and stomped by its greatness, then it’s something to invest on if you have some spare.
Pros
Beautiful and Dazzling Art Animation
No Genie is the same
Adorable Genies and Interaction
Cons
Glitched Pathway
Weird Parkour Moments
Zoom In Feature for Genie Creation
8
Great