More intense, more gory, and more dangerous than ever. 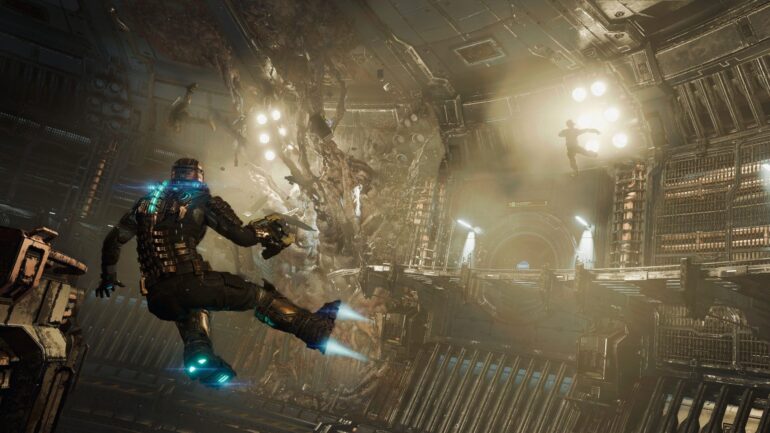 The first change is Isaac Clarke being fully voiced. He will now be talking with his teammates when they are in trouble or explaining things to them. However, he will not be like in the original Dead Space 2 or Dead Space 3 games where he would constantly mumble to himself as he was slowly losing his sanity. This time around, he will only talk if he is being talked to. According to the developers, it makes the game more immersive that way.

In the game, there will be no loading sequences when Isaac rides Ishimura’s tram. This will make travel between destinations like Cargo and Medical areas quicker.

The Dead Space remake will allow players to float in 360 degrees compared to the original dead space which was limited only. Isaac also has a new propulsion boost, which is helpful in avoiding necromorphs trying to attack him in the vacuum of space.

Some scenes that were a bit mild in the original are now more intense in the remake like the sequence where the corpse of the Captain gets infected and turned into a necromorph. Players will now see it up close and personal.

There are new junction boxes that will make players choose which Ishimura function should be closed and which one should be left on. This will increase the tension of the game as they are made to choose which function to sacrifice for an advantage.

Big moments now feel bigger thanks to the big improvement in visuals, lighting, and audio. The immersion and tension levels are on the next level with these big changes.

There are now locked doors and loot containers that Isaac must unlock in order to get resources and upgrade materials that can be used to improve his survivability. Players must find the various items that could upgrade Isaac’s security clearance to make this happen.

The Intensity Director makes the game even scarier than before. Fans who already played the original game will find themselves feeling like a newbie again with this feature as it increases the suspense to the roof with creepy noises like creaking vents and more.

Weapon upgrade paths have now been expanded. There are now new weapon upgrade items that can be attached to the Plasma Cutter, Pulse Rifle, and more. It could introduce new weapon mechanics, or enhancements.

Visuals have been boosted up to give both old and new players a whole new sci-fi space horror experience. Players will see floating dust particles, ominous fog hanging above the floor, dripping blood stains, and dingy lighting to set up the mood.

Gameplay will be familiar but with added fluidity and smoothness. Compared to the original, players are able to aim their Plasma Cutters as quickly as they press the trigger button.

When Isaac fires his Plasma Cutter on a necromorph, it tears away the flesh, muscle, and breaks the bones. The gory details are so clear that it looks like it is a corpse being torn apart in real life.

Check out the video above to see for yourself how improved Dead Space remake is.