No need to worry, fans. Destiny 2 stays the same. 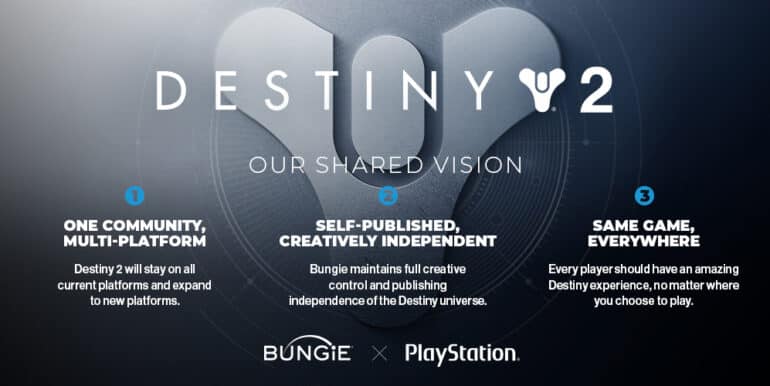 After Sony Interactive Entertainment acquired Bungie for billions of dollars, Bungie posted a new blog on its official website to talk about the future of Destiny 2 and more.

Both Joe Blackburn and Justin Truman recently shared a message on the recently blog talking about Destiny 2’s “Shared Vision” for the future. This is actually a roadmap of sorts for the game and what the community can expect after the acquisition.

There are three points in this roadmap and the first one guarantees that the game will still remain on all current platforms with the title “One Community, Multi-Platform”. The second point is “Self-Published, Creatively Independent”, which meant Bungie will still maintain full creative control and publishing independence of the games of Destiny. SIE will not have any influence on the franchise, just what they said in a recent interview with Jim Ryan. Lastly, the third point is “Same Game, Everywhere”, which meant any Destiny game should be played in any platform the player chooses and they should have the same fun experience.

The post also has a FAQ where it answers several common questions that many fans might ask Bungie of. It is mostly about what happens to Destiny 2 after the acquisition like future seasons, events, packs, and more would not be affected of the acquisition and the like. It even answers the inquiry about cross-saves, cross-play and anything related to it possibly removed due to the acquisition, which was quickly answered by a no.

Destiny 2 is now available on PlayStation and Xbox consoles, and PC.