Hey there, our avid readers! We got the chance to get to know more about one of the rising game development teams in the country: Kooapps! We asked them a couple of questions and they were generous and enthusiastic enough to share with us their success stories of being a game dev team and they were also nice enough to give all of us some tips on how to survive and grow in the game development industry.

Kooapps is a game dev team that started out in 2009 by making games for the iOS system. The game genres that they cater are casual, word, and simulation games. Since then, they have been garnering recognition for their games such as having one of their games, Pictoword, be featured at the top 10 word games in the App Store as well as getting featured on several sites such as Buzzfeed. Just recently, one of their games, Light This Up, won the Most Innovative and Best Edutainment Game award at the Philippine Game Festival Awards 2014. 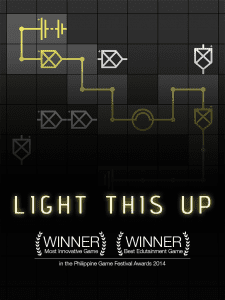 What were your main inspirations for your games?

We draw inspiration from a lot of things but the main question we always ask ourselves is – is this a game we would be excited and proud to show our friends? This inspired our tagline, which is “Make games we wanna show our friends.”

What elements were factored into your decision to choose the platform you are working on? Since other indie and small developers are also doing this too, are there any plans for you to release some of your titles to Steam or PC or any other gaming console someday?

In terms of platform – we’re focused on iOS because of historical reasons. Kooapps was formed in 2008. Android has just been released then while Apple had already released its SDK for developers. Right now, we’re exploring Android too, and who knows we might actually try releasing titles for a different gaming console someday? It might be too early to tell. 🙂

How do you make your games stand out from the market and what are their unique defining features?

Other than making games we wanna show our friends, we also want to make something that will somehow contribute to the society – thus the educational games. We want our games to be played and enjoyed by people of different ages, and also, we want our games to bond people together. We can also say that we always want our games to be near to perfection – we always make sure that our gameplay, user interface and design is of top quality. Quality – our games will always assure you this.

What were the initial challenges you encountered upon first starting out as videogame devs and as an indie gaming dev team?

We started making games in 2009, it was a lot easier to get noticed on the app store then, but it was really hard to make a great game that people want to play. Most indie developers don’t realize this but starting a gaming company is the hardest because we need multiple disciplines (art, dev, design, sound, etc.) to come together. During the very early days, we were so newb at all of those disciplines!

How hard is it to get in and get going in the gaming market? What are the challenges that you are currently facing now in terms of getting more patrons for your games?

It is really difficult. There are thousands of new games being submitted to the store every day and the competition is huge. It is really important to get your name out there and build your brand to earn a steady fanbase. We’re really happy that the success of our games expands and strengthens our player community.

In your opinion, how do you see or gauge the console or the mobile gaming industry in the country? What are the opportunities that you see in developing games locally and how do you see the local dev industry several years from now?

The gaming industry is a multi-billion industry and its state in the Philippines is very promising. Aside from the rise of different gaming companies, and foreign companies eyeing our country for expansion, we are also getting a strong support from the government. We believe that there are great opportunities as we also have a talented and world-class workforce, aside from the Philippines being well versed in English which is an advantage against other SEA countries. However, most of our gaming companies here do outsourcing and there is still a need for a Filipino gaming brand – release a game and have the entire world know that it’s made by a Filipino. We are really looking forward to achieve this.

What advice can you give to aspiring game devs?

Do not stop. A hit game will never be a one night wonder (unless you’re really lucky). It takes years of hard work, multiple ideas and strategies. All you have to do is to love what you do and never lose your passion. Do something that excites you and never run out of ideas!

There you have it, folks! We hope you got to learn something from what the Kooapps team shared with us. If you guys want to know more about Kooapps, you can go visit their website or follow them on their Twitter and Facebook pages. You may also want to join their team by going to this page right here.

Also, if you do have a particular game dev team that you want us to get to know more and if you have specific questions for them, go ahead and leave their team’s name in the comments section below or send us a message through our Facebook page. We’ll do our best to reach them and do a feature for them in the future. 😀