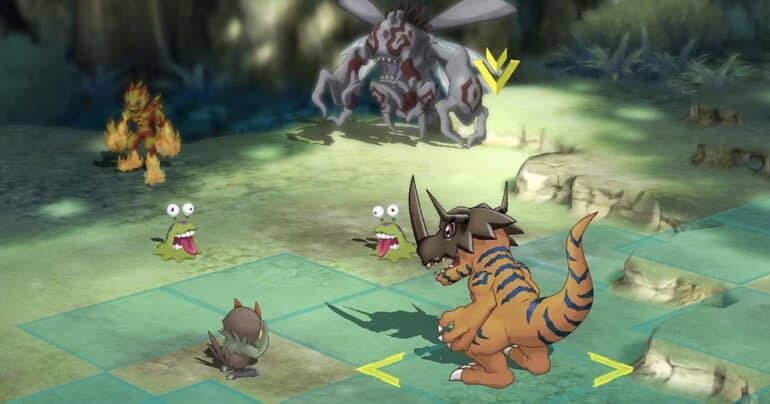 As the calendar quickly turns to July, our excitement for the new Digimon game coming out on the PS4, Xbox, PC, and the Nintendo Switch, titled Digimon Survive, grows as quickly. No details about the game were released other than the story content and what type of game it will be. Until now.

How To Evolve Your Digimon in Digimon Survive!!

In Digimon Survive, players will experience a story that will change their lives forever. The game is centered on a text adventure and the battles that occur in the game progress into tactic battles. Digimon Survive is divided into two axes: a text adventure part where a boy and a monster who got lost in a different world adventure together, and a tactics battle part where fellow monsters are operated as a unit and fight against hostile monsters.

“Folklore handed down in a certain area. A beast-shaped raging god, Kemonogami. It asks for a child to sacrifice and takes him away by spiriting away…. Boys and girls who came to this place for extracurricular camp. They set foot in this shrine where the beasts are enshrined in search of a stray friend. Suddenly, the fog rushed in … and with the screams of my friends, I heard an eerie sound of rocks rubbing against each other. What emerged from the fog was an unknown monster that was completely different from normal creatures. We, who were attacked by a monster and fled, were caught in a landslide and lost consciousness. And when I noticed, a scene different from the place I had before was spreading in front of them. It was a different world where mysterious creatures and monsters were slaughtered.“

In the text adventure part, the game progresses by talking with the characters and examining the mysterious objects placed in various places in the background. “Choices” may appear in the middle of conversations and surveys, and the evolution of partner Agumon will change as the actions selected in the “choices” accumulate.

In this setting, players have limited time to do free actions and time passes by every time an event occurs, selecting a destination from the entire map and moving, or by executing a conversation event that occurs at the destination. On each map, players can explore, talk to friends and do free battles to increase your Digimon stats and obtain new skills.

Certain incidents will occur in the game and that is called Exploration Action. An incident according to the scenario players choose occurs, and the story progresses by moving the map, examining the area, and talking with friends. Sometimes the enemy attacks and forced battles occur. To surive, players have to repel the attacking monsters.  Players will explore, solve the incidents that fall on ourselves, and unravel the mysteries of the world.

As stated, this game is not only a visual novel adventure type game but also a tactic type game as well.

Choose up to 10 Digimons and send them out to the field and battle wild enemies. Each turn, an action command occurs determined by the quickness of a player’s Digimon party members.

Not only that, each Digimon found in this game have different stats, abilities, and attack range that will benefit each player’s progress. In addition, the number of damage changes depending on the compatibility of the monster race (data, virus, and vaccine) and the attack attributes (flame, water, wind, earth, light, and darkness).

Monsters can consume SP to unleash their skills or evolve into released evolution destinations. By evolving it, players can greatly enhance the performance of monsters, but it consumes SP continuously during evolution. SP can be recovered gradually every turn when it is in the growth stage after unraveling evolution, and it can also be recovered by supporting from friends, talking with some partners, and using items.

For those who pre-order the game early, players will get a free Digimon as a DLC gift from the developers.

The Digimon that will be given for free is one of the most popular Digimons from Digimon Tamers, Guilmon. Guilmon is a versatile monster with a passive skill of “increasing fire attribute attack power”. It has a “fireball” that has a long-range and is easy to use during the growing season, and like Agumon, it is versatile enough to handle various battles, and its resistance to each attribute is slightly high.