Better let someone else do the rescuing this time 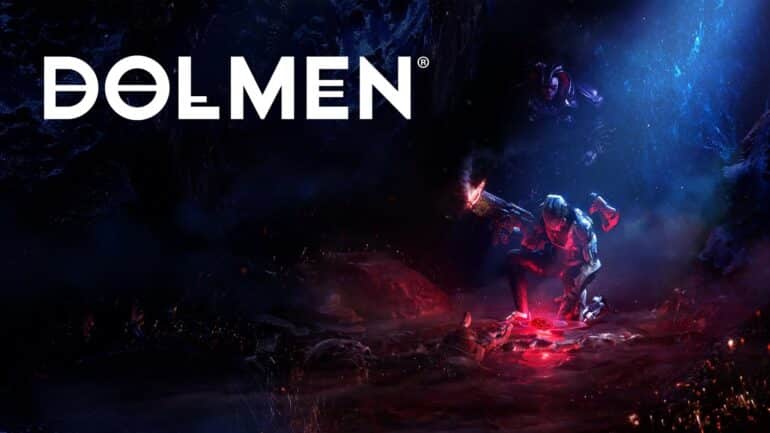 There is an unspoken rule in sci-fi that all distress signals in the middle of nowhere it is never as simple as a routine mission. However, in the case of Dolmen, it is all routine. From the moment you teleport “to the wrong spot” on the planet to when you knock the big bad off of his high perch, it is just all routine. And it is a shame too because Dolmen tries to do something interesting that we don’t often see in most Souls-like games, a reason to fight bosses again.

Dolmen is a sci-fi/horror title that incorporates Soul-like combat. The story of the game involves you, a nameless character who is only known as “the Commander” responding to a distress call about an interdimensional collapse on a planet where an alien race is conducting experiments. Something goes wrong, and here we are, cleaning up the whole mess.

The best way to describe Dolmen is to call it a mix of Dark Souls melee with the over-the-shoulder shooting of Dead Space. It sounds cool when you think about it. But in practice just doesn’t ever come together in the way that you would imagine. That is not to say that the game is completely devoid of interesting moments. It is just those moments are lost in the tedium of going from point A to point B in the most uninteresting ways.

The biggest criticism I have about the game is that most areas are bland and non-distinct. This is made worse when you don’t really know which door you’ve opened every time you interact with a console, even if the camera occasionally pans over to show you that you’ve unlocked A door.

Where on the map is it? Oh, there’s no map? How about any disguising features that inform the player that this particular door is more important than any other locked door? None? Cool. Guess I’ll go run laps until I accidentally stumble upon it.

This kind of clunkiness even extends to the game’s melee combat. The animations are stiff and attacks that look like they should be hitting often fall short of making contact. The only saving grace for combat is when you mix it up with ranged combat and reactor attacks.

When you include anything that uses up the battery power, suddenly the game becomes fun. Shooting isn’t as cumbersome as striking with a regular melee attack. In fact, switching from a shooting stance to back to third-person is snappy and responsive. Using the reactor, which also consumes battery power, allows attacks to extend further via energy blast with the added benefit of an elemental debuff. It makes me wonder why you would even bother with regular melee combat if the alternative does a better job and recharges as fast as a stamina meter.

(It’s as if they wanted to us to constantly use the reactor and ranged weapons.)

And that’s how you should view the battery meter, it is just another stamina meter that only ever goes down if you use battery power to replenish health or, in the case of some weapons, alternate attacks that consume max energy. You can recharge your battery by consuming cells, much in the same way as one would consume an Estus Flasks in Dark Souls. But the catch here is that recharging the battery takes a long time to consume.

And that’s another thing that annoyed me to no end. Some actions take forever to perform.

I already mentioned battery charging. That makes sense – something that allows you to do so much must take a while to recharge as a consequence of relying on it. But why does something like performing a jump attack take two and a half years for the animation to complete? And it doesn’t even stun the enemies you hit half the time. In the time it takes for you to land a jump attack, the enemy has already taken a chunk of your health away, taken the hit like a champ, and managed to deal damage back before you can reset and recover from performing the attack. Excuse me? That’s underwhelming as power attacks go.

There are a total of around 4-5 distinct biomes in Dolmen, which all look pretty good on PS5 graphics. But almost all of them connect back to the same old labs where scientists are experimenting on something they shouldn’t. That’s fine and all, but is it too much to ask for a little more detail like organic growth eerily undulating or at least covering dead bodies in sand or something? At least reward the player for exploring the map. I suppose you can get away with a bland setting and story if the gameplay is compelling but from what I’ve described combat thus far, it is very much hit or miss.

The most fun I’ve had in the game was when I went from place to place, harvesting materials from as many enemies as I can, and using Nanites(Souls.) I’ve collected, and make the best armor possible with the best materials I had on hand.

The more time I spend in Dolmen, the more I got used to the weird interactions within the game. I’m talking about enemies that run past you as if they were following a ghost. Weird interactions with a sandworm that, in close inspection, will send you all the way into the air and into goddamn Narnia. Heck, even interacting with the few survivors looked and felt like something from the PS2 era.

I’d like to say that there’s a certain charm to it… But there are no two ways about it, much of this game is janky AF.

The boss encounters were somewhat enjoyable though. Like a proper Dark Souls encounter with predictable attack patterns and the occasional second stage. It won’t make up for the rest of the 2/3 of the game. Additionally, if you pick up these resources called Dolmen Fragments (Souls 2.0), you can replay the whole boss fight to have a chance of earning materials to make unique weapons. In this regard, that makes the boss fights more meaningful, I suppose. Okay, I can make an exception for the final boss. That guy didn’t allow for any breathing room at all unless you manage to stun him. And was the most troublesome to deal with. Let’s just say that it took more luck than skill to finish the fight.

Overall, Dolmen is a hastily assembled mess of a well-intentioned game. It is like a wannabe sports car. No matter how pretty it looks on the outside, if it’s running on a 2-cylinder engine underneath the hood, there are going to be awkward looks all around. But in the end, it’s going to depend on your millage. As much as I dislike the all-style, no substance presentation, I have to admit that some of the features are actually quite enjoyable. It may look pretty from afar. But its style over substance approach is what ultimately dulls the experience of this otherwise decent soul-like shooter.

Dolmen – Review
Score Definition
We want to emphasize that 5 will always be the “average” number, not 7. So by far, it’s 50% great and it’s also 50% bad.
Pros
Interesting crafting system
Gives you a reason to want to fight bosses again
Ranged combat is snappy and responsive
Interesting use of the battery mechanic
Cons
Questionable AI
Empty locations devoid of any distinct features
Clunky melee combat
Mostly forgettable story
It takes forever to do certain actions
5.5
Average