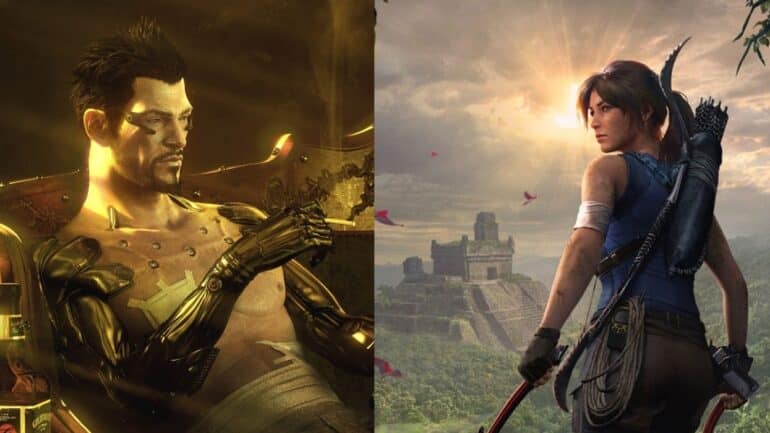 The Japanese video game company Square Enix is selling several of its studios and their IPs to the Embracer Group. The Embracer group purchases Deus Ex and Tomb Raider, two well known game franchises and their studios, from Square Enix for $300 million USD. What will this mean for the future Crystal Dynamics, Eidos Montreal, and Square Enix Montreal?

The game publishing company, Embracer Group, announced on Monday May 02, 2022 that they are entering an agreement with Square Enix to purchase several game studios responsible for developing games like Deus Ex, Tomb Raider, and Thief. This agreement features a USD $300 million buyout to Square Enix for Embracer to acquire Crystal Dynamics, Eidos Montreal, and Square Enix Montreal.

Although Embracer has announced that they are purchasing the three studios, the deal isn’t finalized yet. Both the Embracer Group and Square Enix are set to seal the deal later this year. The purchase is expected to be completed around Embracer’s second quarter financial year, between July to September 2022. For $300 million in USD, Embracer Group will acquire the rights to:

Depending on how you feel about the sale, this can be taken as good news as Square Enix has been particularly ignoring popular games like Deus Ex or Tomb Raider for a long while now. The Embracer purchase of these studios will mean that we’ll see a return of these IPs back to life in the near future.

Back in 2009, Square Enix purchased both Crystal Dynamics and Eidos Montreal which have gone on to create a reboot of the Tomb Raider franchise and Deus Ex that were actually well received and even later developed Marvel’s Avengers and Marvel’s Guardians of the Galaxy. Despite the online praise for the games these studios have created, Square Enix has always mentioned that these studios have put out have under-performed.

Why Is The Embracer Group Buying These Studios From Square Enix?

The Embracer Group is apparently buying these three studios due to being impressed with their portfolio of games. So what’s going to happen to the games Embracer has acquired? According to a statement from Embracer’s press release:

The acquisition brings a compelling pipeline of new installments from beloved franchises and original IPs, including a new Tomb Raider game. The acquisition builds on Embracer’s mission of creating a leading independent global gaming and entertainment ecosystem. Embracer has been particularly impressed by the studios’ rich portfolio of original IP, housing brands with proven global potential such as Tomb Raider and Deus Ex, as well as demonstrating the ability to create AAA games with large and growing fan bases. There are compelling opportunities to organically grow the studios to maximize their commercial opportunities.

The Transaction will assist the Company in adapting to the changes underway in the global business environment by establishing a more efficient allocation of resources, which will enhance corporate value by accelerating growth in the Company’s core businesses in the digital entertainment domain. In addition, the Transaction enables the launch of new businesses by moving forward with investments in fields including blockchain, AI, and the cloud.

We’ll have to wait and see what Embracer has in store for Eidos Montreal, Crystal Dynamics, and Square Enix Montreal once the deal is finalized later this year. Not everything was sold to the Embracer Group however as the press release of their Share Transfer Agreement with the Embracer Group confirmed that they’re still publishing future games from Just Cause, Life Is Strange, and Outriders franchises.

Check out the conference video from the Embracer Group regarding their acquisition of these Square Enix studios.