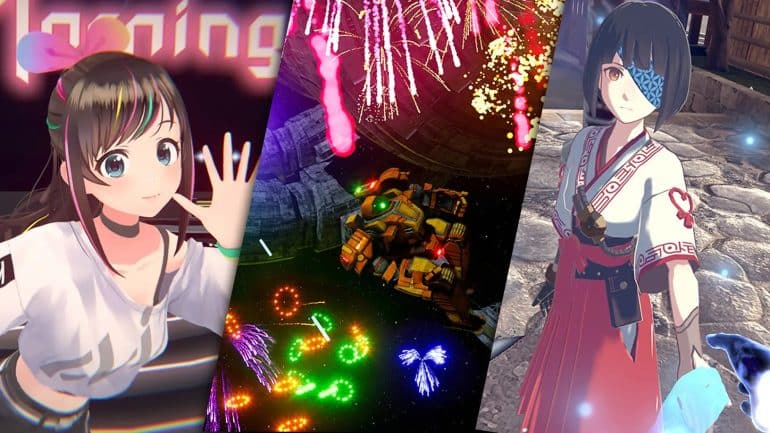 Various new titles are coming to the upcoming PS VR2 headset next year and this new lineup comes from Japanese developers. It includes a very nostalgic title that came out way back in 2000 for the PS2. Other titles also include Altair Breaker, The Tale of Onogoro, Kizuna Ai – Touch the Beat!, and more.

Here are the VR titles launching together with the PS VR2 developed by Japanese gaming companies:

Fantasvision 202X is developed and published by Cosmo Machia Inc. and will be released on February 22, 2023. This was originally released on the PS2 in 2000. It is a popular puzzle game based on the theme of fireworks and it returns in an all-new title for PS VR2 powered by the Unreal Engine. In this game, the goal is to catch at least three fireworks of the same color and shoot them into the night sky. Players can catch fireworks by aiming at them and pulling the trigger then shoot them with the Circle button.

Altair Breaker is developed and published by Thirdverse and will launch on February 22, 2023. This game is a multiplayer sword-fighting action where players go into the AI-created virtual world Altair, which was once a beautiful archipelago covered by a sea of clouds. In this game, only a single floating island remains. In its ruins are experimental combat AI ruled by a fully autonomous weapon called Laws-Zero.

The Tale of Onogoro is developed and published by Amata K.K who created the escape adventure Last Labyrinth. This is a new co-op tale where players find themselves thrust into an all-too real parallel world where danger and mystery await. Join forces with Hal, a shrine maiden who lives on the island of Onogoro to solve puzzles, fight raging beasts, and more.

Kizuna AI Touch the Beat is developed and published by Gendrops, Inc. Cheer along to 15 popular songs by virtual YouTuber Kizuna AI in this rhythm game that is playable on PS VR2 and PS VR.

Dyschronia Chronos Alternate is developed by myDearest Inc. and published by Perp Games. It is an investigation game in VR where it offers immersive cinematic experience and an epic story. It is developed by the creators of Tokyo Chronos and Altdeus Beyond Chronos for PS VR. It takes place far in the future in Astrum Close, a maritime city with a crime rate of 0.001%.

X8 is developed and published by Thirdverse. Its release date is still in the air though. The game starts with a digital cataclysm where the worlds of various action games have now rebooted into nothingness. The heroes have been drawn together and are forced to compete to try and obtain a game engine that will restore their games.