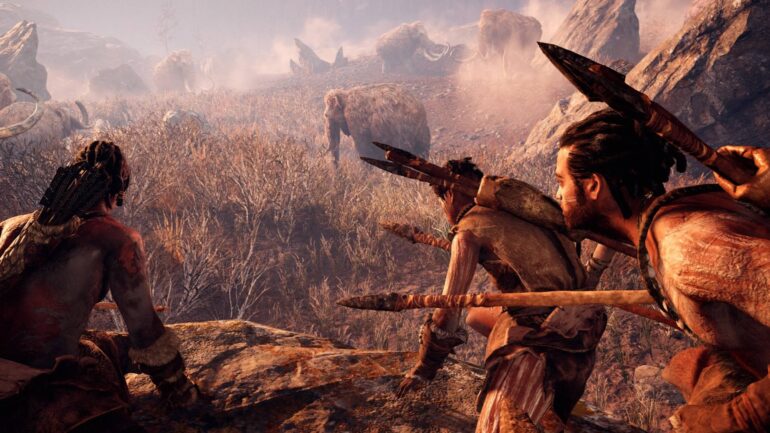 The first thing that occurs to you as you boot up Far Cry Primal is how beautifully crafted its environment is. The game starts while dropping you into a sequence where you and your Wenja tribe mates are hunting down a baby mammoth amongst its herd. And as you stealthily walk across the herd you’re able to see the fine level of detail imprinted upon each individual mammoth in place. After the opening sequence we get right into the meat of the game.

The game, like any other open world game, allows you to choose the sequence and order of how you tackle your missions. And it is large, leading you to traverse forests, rivers, caves with an abundance of resources that you harvest in order to craft your tools as well to upgrade them and your village. The enemies you encounter in the game could either be the wild life, the animals living in their habitat and hunting their prey or enemy tribesmen who wish to either enslave you or kill you or in the case of the Udam tribe eat you. All of these contribute to give you a sense of the life one would lead during those times. The unseen dangers that can be found in the wilderness, the animosity between tribes, the prevalence of slavery, it truly contributes in establishing the dog eat dog world mentality that is often exemplified by those times. 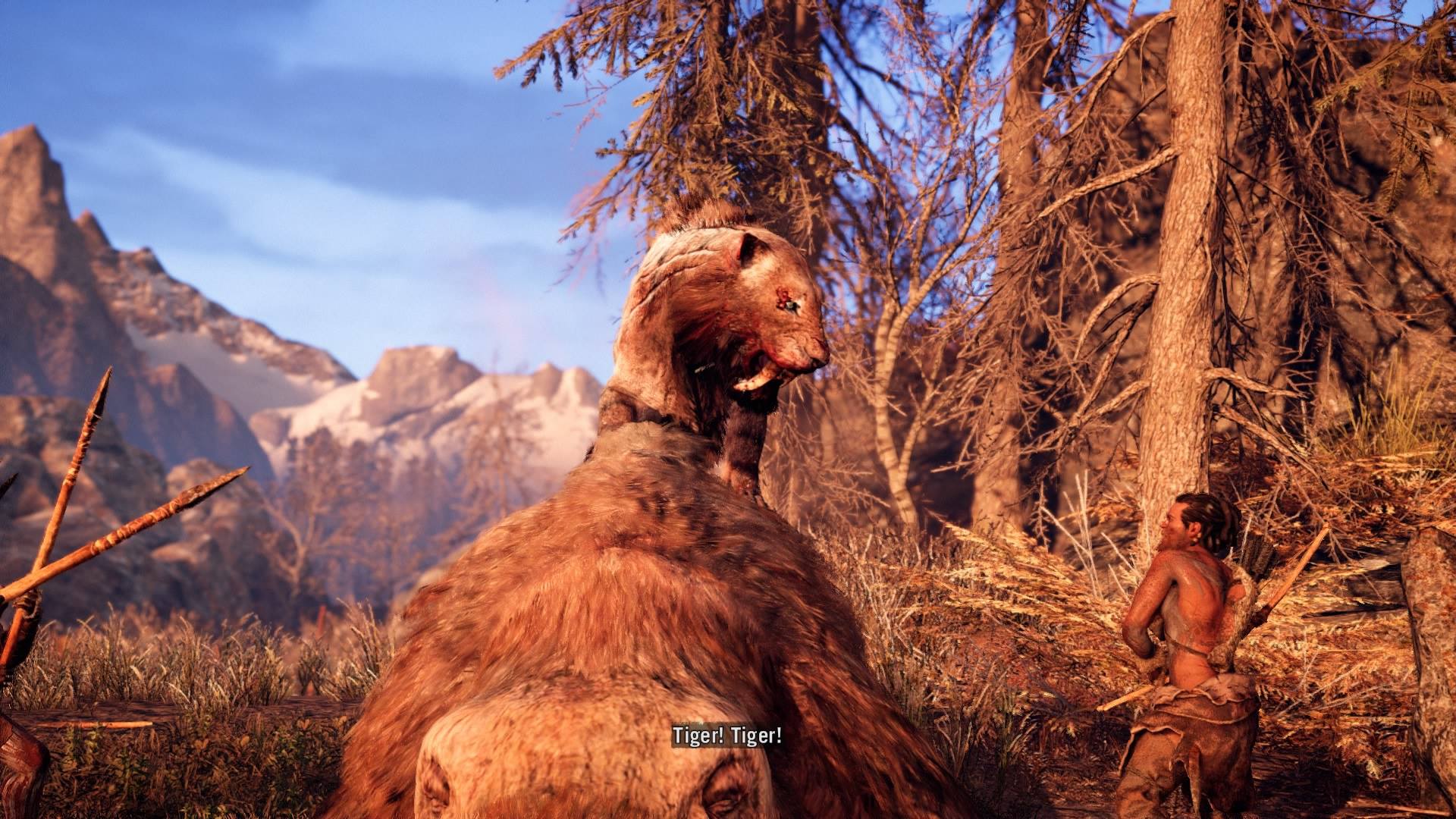 In order to defend yourself you are given a variety of tools. There are 2 methods you use to engage your enemies a simple stealth system (get behind an enemy and you can do a one hit kill move) or direct combat. You start with 3 weapons: the bow, the club and the spear. Later on in the game these weapons are supplemented by the presence of bombs and their subsequent types, shards, traps and the animals you tame. Each and every one of these tools can be upgraded by the use of the skill points one obtains either through quests, collectibles, or through the staple of combat. The club is your basic melee weapon: fast and deadly at close range. The bow is your basic ranged weapon easy to use and incredibly efficient especially if you get the right skills.

The spear doubles as both a melee and ranged weapon but it’s far more valuable as a ranged weapon, outputting more damage than the bow and arrow at the cost of more materials per spear as well as a more limited ammo pool. Though the ammo pool limitation isn’t that heavy of a burden due to the abundance of crafting materials as well as a time slow down while crafting ammo. The bombs function well enough with a notable gimmick in the form of a berserk bomb where in those affected would strike against their allies. And the shards are a backup ranged weapon which could have the same effect as some of your bombs. All of the weapons are simple and easy enough to use. They do not however have much of a different feel from one another. In my experience each weapon played relatively the same, the only difference being the speed at which they perform in specific ranges. It really doesn’t matter which weapon you choose as such as they all effectively handle in the same manner, once you are able to get a feel for their strike speed. 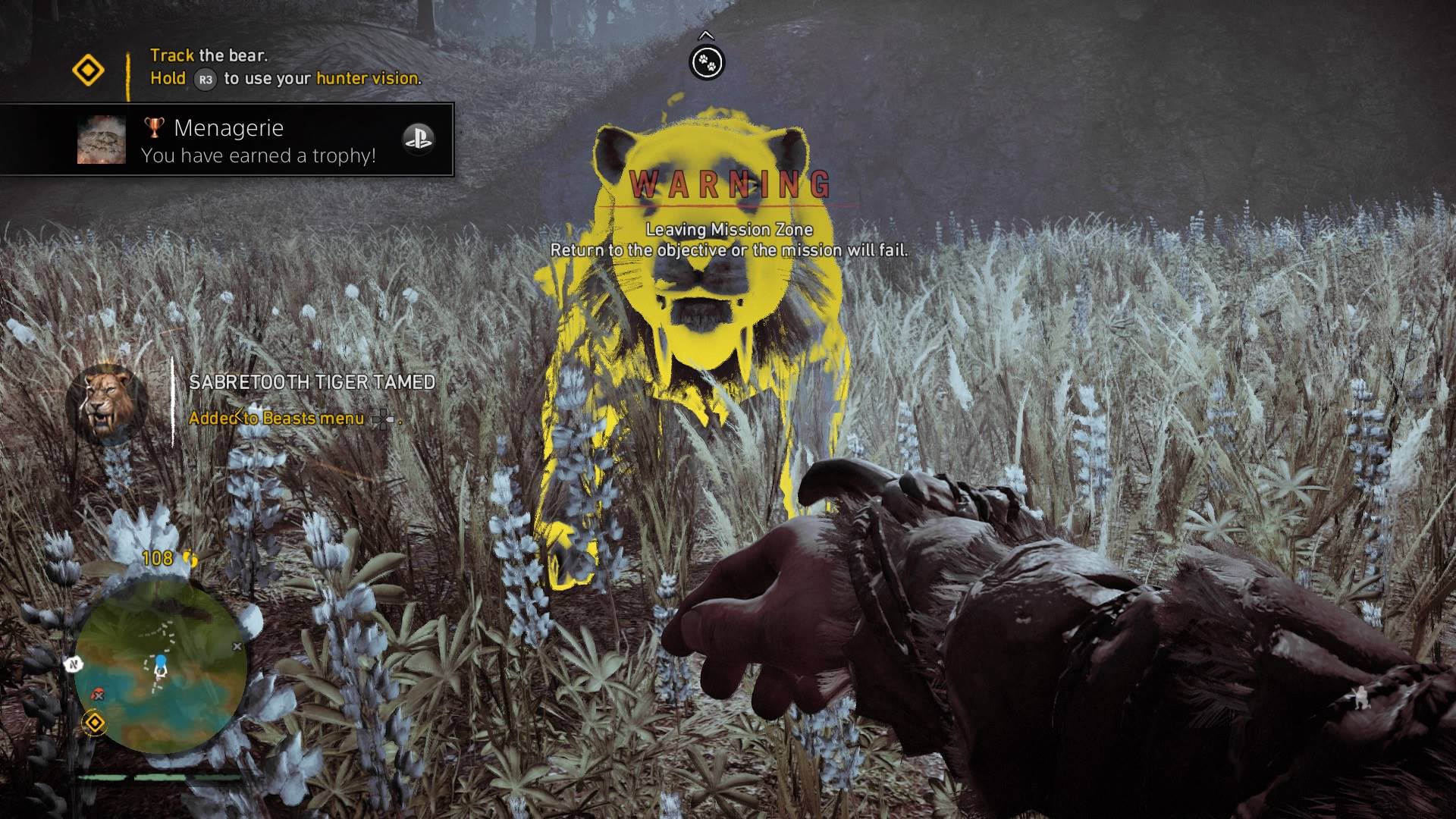 The game, however, shines in its animal taming feature. From your owl, which early on allows you to scout ahead and later on acts a type of tactical airstrike being able to take down an enemy at the cost of a short time of being unable to use it. As well as a strategic airstrike where it can take your bombs and deliver them from the sky to your hapless enemies… then there are your tamable allies, you start off only being able to tame wolves and the like but later on you can tame bears, sabertooth tigers and badgers. Each animal has its own stat and particular specialty. Bears for example deal a terrific amount of damage while also taking enemy attention away from you. Sabertooth tigers are fast and powerful predators. Badgers, yes badgers are a particular animal whose ability makes it that they are able to revive themselves once as well as scaring other animals. Each animal once tamed can be used to attack your enemies and in the cases of the larger animals be ridden as mounts. It’s a particularly exhilarating feeling getting your own sabertooth tiger after being attacked and mauled by one early on. This taming feature is the highlight of the game making you feel particularly powerful. And it is a highlight feature in the game simply because of the variety of animals you can tame. As well as being the component exchanged for modern transport. Riding into battle on the back of your sabertooth tiger just feels incredible as your enemies are pointing at your tiger.

Far Cry Primal is successful early on in the game. Exploring and hearing an animal roar makes you swivel your character around trying to avoid being mauled by the powerful predators, or stealthily, making your way towards your prey so that it won’t hear you coming. Later on in the game where you can often have your tamed animal destroy your prey, it simply allows you to experience what it must feel like to be a hunter — in this, the game succeeds, the combat and taming system while simple is quite enjoyable and engaging. Graphics wise it what one expects from the series, beautiful backgrounds and environment. Sound wise, the game does well by creating distinct sounds for each creature one can encounter in the wild. 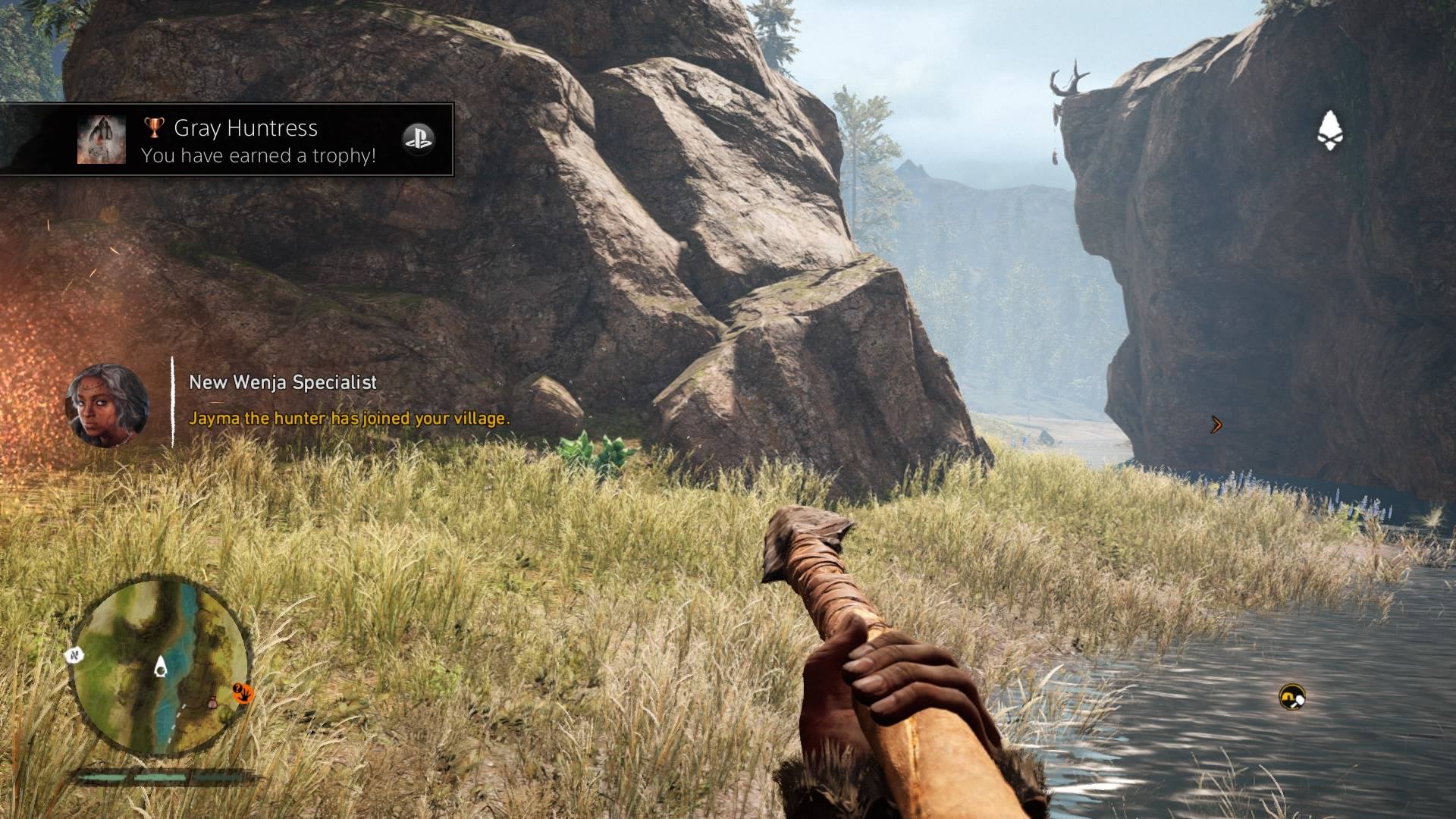 The game’s value in replayability lies in survival mode where you forego the use of the mini map to find your objectives as well as eliminating the ability to revive your fallen beasts as well as reducing your ability to respawn.

Far Cry Primal, however, falls flat in some aspects. The story is remarkably simple and the characters aren’t that engaging. Though credit to the makers in developing a unique culture and language for your protagonist. The game’s lacking variety means there isn’t much of a learning curve after the initial few hours your style may become set and this sets you up for the entire game. And there isn’t ever much of a need to change your style afterwards. These flaws however do not take away from the game being enjoyable. It’s a solid experience well worth investing a few hours into. Hearing a sabertooth’s roar early in the game feels terrifying as your character at the time would still be incapable of handling an attack from one.

This review is based on the review copy provided by the developer/publishers.