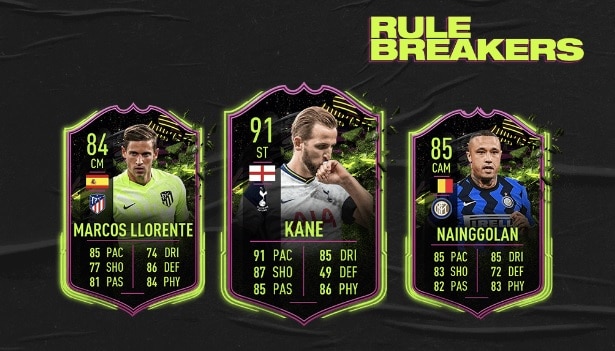 FIFA 22’s Rulebreakers is the new Ultimate Team promo where before EA SPORTS would be doing a special event called the “Ultimate Scream” promo for the end of October which also happens to be Halloween wherein they turn popular FUT stars into different kinds of monsters with changes to their stats and live upgrades that are based on the full moon. However, ever since last year, they decided to do something new and called it “Rulebreakers”.

What Is FIFA 22 Rulebreakers?

Rulebreakers still focus on the fan favorite cards and still give them a super boost in stats that no one usually sees in the standard performance-based upgrades. You can see some of the players with abysmal stats become beasts that could easily outscore any of the most famous stars but that would all depend on who EA SPORTS wants to mess around with.

Rulebreakers start date is coming up soon. EA SPORTS is looking to start the promo event on Friday, October 29, 2021. The first team that is going to be added to the packs will also be on the same day with the second batch following up on the Friday after on November 5, 2021.

FIFA Ultimate Team players have nothing to do but wait and look for any possible hints of any Rulebreaker cards. The hints can range from anything such as card ratings, nationalities, and stats boosts.

FIFA 22 Rulebreakers How It Works?

EA SPORTS would usually boost the most effective stats of whichever position the player is great at. Like a Striker getting a huge increase in their finishing or pace. However, while stats may usually get boosted the reverse is also true but it’s not as severe as the boosts.

The players that usually get the Rulebreakers treatment are the ones who have quite a bit of fame to their name but their stats in the game are the only thing holding them back from truly shining in FIFA Ultimate Team.

It’s going to be really hard to predict which cards are going to get the lucky Rulebreakers treatment since it all really comes down to who EA SPORTS thinks should get it.

Though there are some patterns that fans may be able to deduce especially considering that EA SPORTS has become somewhat predictable in a way in recent years.

Here are our best predictions on which cards are going to get the treatment:

And that’s about it for now with FIFA 22 Rulebreakers.