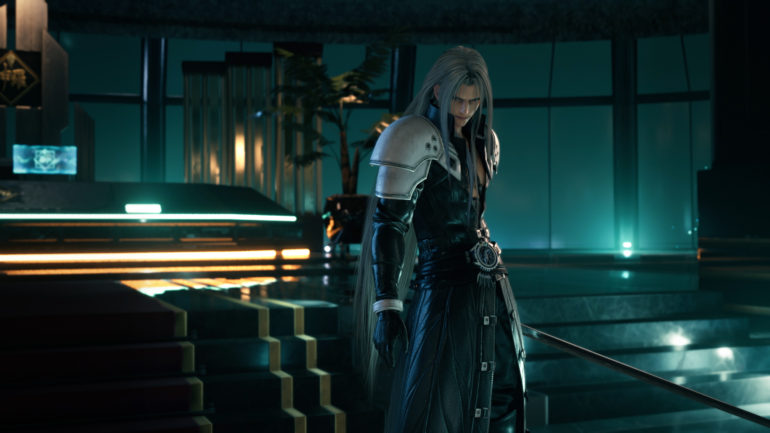 Final Fantasy VII Remake producer Yoshinori Kitase recently talked with Square-Enix Duncan Heaney in an exclusive interview about certain aspects of the game. One of which is a particular change from the original to the new remake.

Kitase discussed the change they made with how they handled the main villain of FF7, Sephiroth, in the remake. In the original, he was hidden away, a mystery to the player in the first half and he was only whispered by individuals who have encountered him and the pile of devastation he left a trail behind. In the remake, there was a big change.

The producer stated that in the original the team wanted him to be this big powerful presence, but never showing his physical form until later in the story. They wanted to build him up as a powerful character in the player’s mind hence the rumors and trails of destruction in his wake.

The reason why he was shown right away at the start in the remake was simple: everyone knew him already. The mystery vibe did not work anymore in this time, which is why they needed him to show up right away.

There was also another reason for his early appearance: Kitase said:

Secondly, Sephiroth is this massively overarching presence that looms over the whole FINAL FANTASY VII saga. We wanted to make sure that aspect of him was present in this first game in the project – that’s why we have introduced him much earlier in the story now.

Changes on story and structure of the game

Co-director Naoki Hamaguchi revealed the changes the team did for the story and the structure of the game, which was a lot. They were working closely with the scenario writer Kazushige Nojima for this game, but they also had to create a nice balance. There were certain parts of the game where they wanted to ramp up the excitement, which became the focal points of the story.

The way the team did it was that they mapped the game out first then if there was a scenario that did not support that portion, they would gather all of the information and then send that back to Nojima. He would then make changes or improve on that and then the designers use that. The end result was the remake and it was very satisfying on their part.