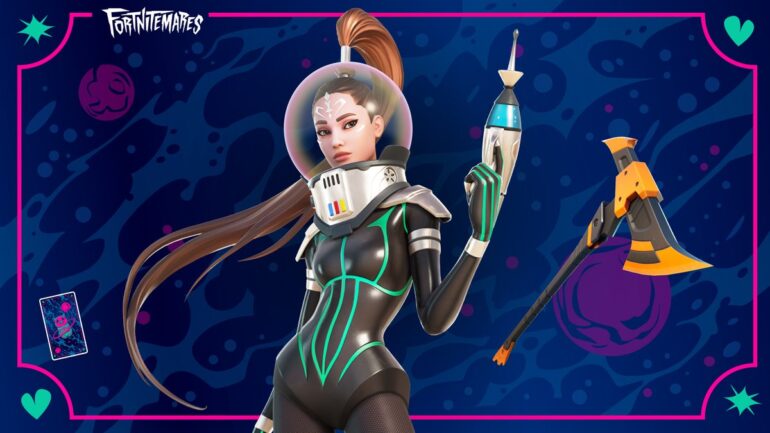 People are probably excited that Ariana Grande is returning to Fortnite, but this time she’s giving us a set of punchcard quests that’ll give us a new pickaxe as well as some XP of course to help us move up some tiers.

Starting the quests requires us to find Ariana Grande who is at the pier in Believer Beach.

You can find the command signals in Believer Beach, Weeping Woods, Misty Meadows, Corny Crops, or Retail Row. When you reach one of the areas there will be a pink silhouette and three sticks sticking out of the ground around it with a blue hologram.

To reveal the command symbol, all you need to do is to follow the emotes of the blue holograms to solve the puzzle. If it wants you to vibe then use the “Vibin'” emote, if it wants you to jump then jump, and so on.

If you check your quest log screen then you’ll see that there are plenty of Caretaker’s Footprints scattered across the map, some are located in Corny Complex, Dirty Docks, and Holly Hedges. They are large, circular, and have a purple glow on the ground. There are five footprints in each area and you will need to study two sets to finish the quest.

You can find turntables and speakers in Believer Beach, the mountain top southwest of Misty Meadows, and Retail Row. The easiest would be the mountain top southwest of Misty Meadows. There will be a dance studio up there and just look for the box of records next to Fabio Sparkleman. There are also records that can be found in several locations such as within the houses in Pleasant Park and those in Craggy Cliffs.

Collect the record then the turntables next to it to complete the quest.

The last challenge requires you to launch three signal flares, which are striped rockets that you can find on the mountain southwest of Catty Corner, south of Believer Beach, on the hillside between The Convergence and Lazy Lake, Craggy Cliffs, or southwest of Dirty Docks. Just interact with the rockets to see the fireworks and you’re done.

So how was that for an Ariana Grande level challenge? While there may be a lot of work to do, at least now you’ll have yourself a special item to remember it by as well as the 150,000 XP in total that you got from doing all five quests. For more guides on Fortnite check them out here on Sirus Gaming.