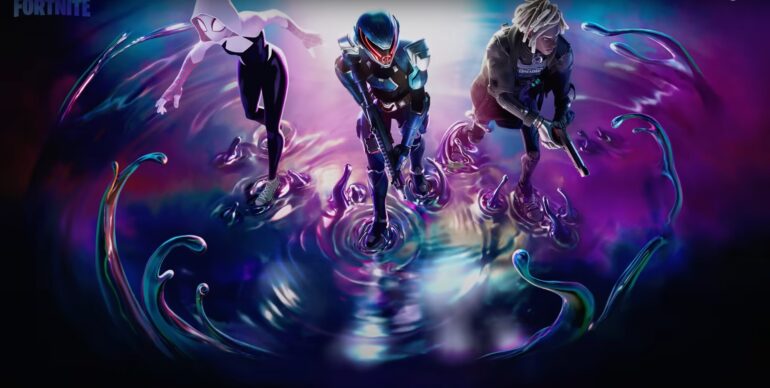 In this new season for Chapter 3, there is a mysterious substance that has appeared on the Island it wants to consume everything in it. Players have a choice to become Chrome though as they can turn structures into Chrome, make their characters into Chrome, and make Chrome weapons.

There will be a new weapon called a Chrome Splash which will make walls penetrable. It will be helpful to players who want their opponents more vulnerable to their attacks.

Players can also become pure Chrome by throwing a Chrome Splash onto themselves. This will make them into a Chrome being for a limited time, which will give them some cool perks. They will be immune to fire damage, become a Blob when sprinting, immune to fall damage, and have the ability to air dash. Dash into any building to make it into Chrome then allow them to phase through it.

There is a new building called the Herald’s Sanctum which is nearby the abandoned Sanctuary.

Some Island locations have now been airlifted into the air after fearing the Chrome invasion. The Condo Canyon is now called Cloudy Condos and the only way to get there is the D-Launcher, which can be found in different places on the island.

There are new guns too like the EvoChrome Shotgun and the EvoChrome Burst Rifle. They can be found in Chrome Chests. The more players damage enemies, the guns’ rarity increases as well.

Here are the weapons before the Chrome Era arrived. Check them out:

Here are the changes for the Rifles in the game:

Players can now deploy a mini structure in an instant with an item called the Port-A-Bunker, which will take place of the Port-a-Fort. It will instantly create a 1x1 structure featuring reinforced metal walls, a versatile ramp, doors, and defensive tires.

Chatper 3 Season 4 Battle Pass offers an immediate unlock of Paradigm (Reality-659) if bought. Progress through the Battle Pass to unlock Spider-Gwen and these other characters: