Here's what you get for next month's Crew Pack! 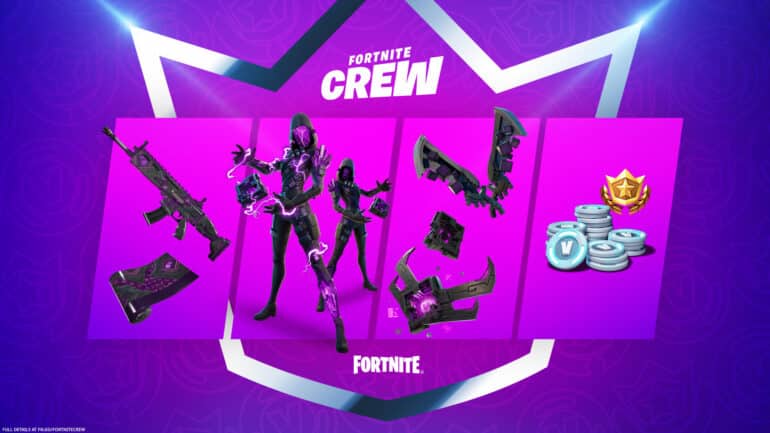 Epic Games has announced the Fortnite Crew Pack December 2021 rewards, which will allow players to acquire the current Battle Pass, V-Bucks, and the new Cube Assassin skin for a certain price.

The Fortnite Crew membership was offered by Epic Games in order for players to gain rewards that could not be acquired in any other way except this. It guaranteed players that they would get such rewards without fail.

Here are the rewards that players could get with the Fortnite December Crew Pack, its price, when it will be renewed, and more.

Subscribing for the December 2021 Fortnite Crew Pack could land you some nifty, guaranteed rewards that are related to the latest season. One of the rewards is the cool Cube Assassin skin, which is reactive. It means that if you get more eliminations during a match, there will be a purple effect that will appear on the outfit.

The subscribers will get the Battle Pass that is currently available, but if they have it already, they will get 950 V-Bucks instead. They will also have unlocked the Protocol Pack Back Bling as part of the Legacy Set until December 31, 2021 at 7 PM ET. The last stage will be unlocked on December 14, 2021.

The December 2021 Fortnite Crew membership rewards will be available for all those who have subscribed starting on November 31, 2021 at 4 PM PT/ 7 PM PET.

How to Claim the Rewards

In order to claim the rewards, subscribers only need to log into their Primary Platform during each monthly subscription period. This will give them access to the subscription content that is being offered at that time.

The short answer is no. Epic Games confirmed that it will only work on their primary platform. If a player signs up for Fortnite Crew subscription on the PS4 or PS5, it will not work on the Xbox One or Xbox Series X/S, and vice versa.