The secret of the Cube Queen. 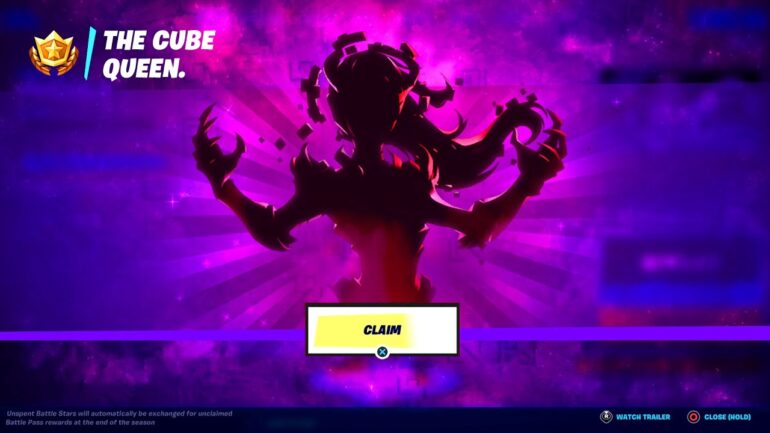 We’ve been through this before and we’re going through this again. I’m talking about Fortnite showing us a silhouette of a mystery character tied in with their battle pass. So this time Epic is going with an original character to help keep us guessing.

If you happen to click the ‘???’ section of the Battle Pass, there’s really nothing there but you do see that she has two pages worth of content and we’ll be getting 10 unlockable items to go along with them. All of Fortnite will have their eyes on this mysterious character when the secret skin will be revealed. There’s no specific time yet for when it goes live but if we’re going by the usual pattern of the release of new content then we’re looking at around 7 AM PT / 10 AM ET / 3 PM BST.

If we were to check the silhouette in the Battle Pass menu, then we can see that the mystery character has a very feminine figure with sharp nails/claws, long hair, possibly a floating crown or a sort of halo, sharp fiery armor, and some cubes floating around her which might suggest that she has telekinetic abilities or has a telekinetic aura. If you think about it then she perfectly fits an image of the Cube Queen.

Is the Mystery Character/Secret Skin Part of Fortnitemares?

If we’re going by how the announcement is coming up near the end of the month of Halloween then yes there’s a big chance that our Myster Character is going to be a part of Fortnitemares but this is all really just speculation.

How the Mystery Character will play out with the story of Fortnitemare is anyone’s guess but this character will most likely be the centerpiece of Season 8’s story. It’s too bad we know so little about it but we’ll be keeping everyone up to date with the latest news and updates of Season 8.

With the dates lining up the way they do, it’s very possible that the skin may be tied to an event. I would hazard a guess that it’s more tied to the overall season story than something like Halloween though.

Given how the outline of the skin appears and the ongoing moving cube situation, this is where the link is. We still know so little about how the Season 8 story will play out, but this character may have a huge role to play.

We can’t wait to see how things play out over the coming weeks. We’ll keep you up to date with the latest news and updates on Fortnite right here.