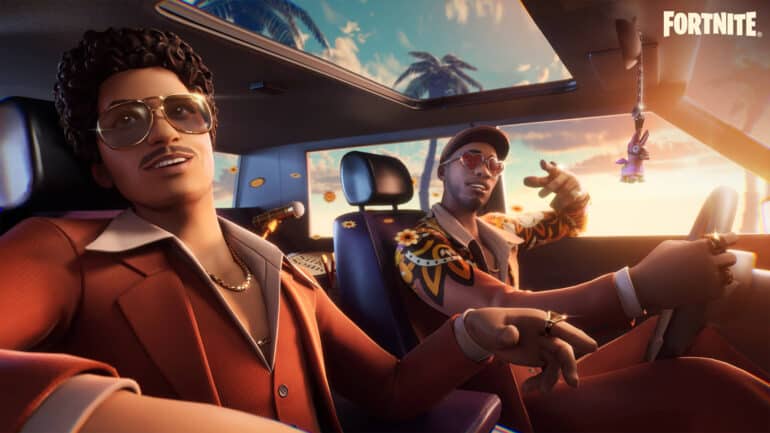 Epic Games announced new outfits that join the Icon Series of Fortnite and they are both popular R&B singers.

Grammy-nominated R&B duo Silk Sonic has joined the battle-royale game in the form of skins. Bruno Mars and Anderson .Paak joins Fortnite with their crisp and jazzy outfits and style. They will be coming to the game on Thursday, February 10, 2022 at 7PM ET.

Players can compete in the Silk Sonic Cup that will happen on Monday, February 7, 2022, for a chance to win the Bruno Mars and Anderson .Paak Outfits early.

Aside from that, Fortnite launches their brand-new in-game radio station called Icon Radio. For its launch, it will now air some awesome vibes from Silk Sonic, Bruno Mars, Anderson .Paak, and Bootsy Collins as the host.

Both outfits are part of the Silk Sonic Set, which will include accessories that are based on each member of the popular duo. Check out the Sound Scepter Pickaxe for Bruno Mars, and the Back Bling with the Freedom Wheels Emote.

Anderson .Paak has the Sonic Snare Back Bling, and the Boom Bap Pickaxe.

Both Outfits will have their alt Styles including the default versions with their own reactive Style for each. Before a match starts, play the Somebody This Fly Lobby Track and use the Leave The Door Open Emote in-game.