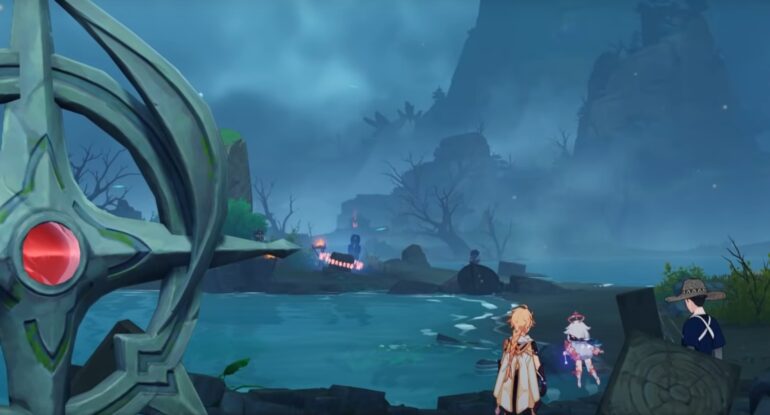 A Particularly Particular Author World Quest is one of the new world quests that will take Travelers on a journey to visit some of the shrines of Tsurumi Island.

In order to start this quest, Travelers need to have reached Inazuma and completed the Seirai Stormchasers World Quest.

Once the quest has been unlocked, Travelers can go to Katheryne at the Inazuma Adventurer’s guild in Inazuma City in order to start the quest. You will then need to find Sumida in the city who will then direct you to Ritou. After Ritou you will then talk to Kama at the docks who will take you to Tsurumi Island.

Do note that Kama will be the only one who can take you to Tsurumi Island unless Travelers would dare to challenge the impassable fog.

You will then have a conversation with a young boy named Ruu, who will ask for your assistance in the ceremony for the summoning of the Thunder Bird. Then you will need to interact with a tree, which will release three feathers as a result of your interaction.

How to Complete the Particularly Particular Author World Quest

You will now head to Autake Plains where enemies will be welcoming you with open attacks. Use the elemental sight in order to hunt down the perch’s feathers.

The first feather will fly away when you spot it, it will head towards a barrier. To follow the feather, you’ll have to summon an Electrogranum.

For the second feather, it’s below a cliff where the porch is.

For the first feather, you can easily find it close to the porch.

The second feather will be further away from the others and is being protected hilichurls and hidden archers.

The third feather happens to move a lot. Once you find it, ride the Thunder gates and keep following it until it decides to stop at a ruin.

To reach the feathers, you will need to remove the water first by following three Seelies and bringing them back to their pedestals which are in front of the perch. Two of the Seelies are relatively easy to find the third one is hiding behind a breakable wall.

Check our complete guide on how to solve Shirikoro Peak Puzzles.

Then you dive down into the drained area to interact with the feather which will then float away. After following the feathers, you will end up in a chamber with electro puzzles and a Ruin Guard on the other side of the door. Complete the puzzles by lining them up in a specific way in order to power them up.

The final door should now be open for you to get the feathers.

Once you’ve done all of the three locations and the fog has dissipated, make your back to the ceremonial site for a short cutscene after grabbing the Maushiro. Go back to Kama to get back to Ritou, then talk to Sumida to wrap it all up and get the rewards.

Now that all of that running around and solving is done, Travelers can gain the following rewards:

Here’s a video guide for the quest courtesy of YouTuber MMOJACKX57:

Check out our other Genshin Impact Guides: