What we know so far about the swordsman of Sumeru. 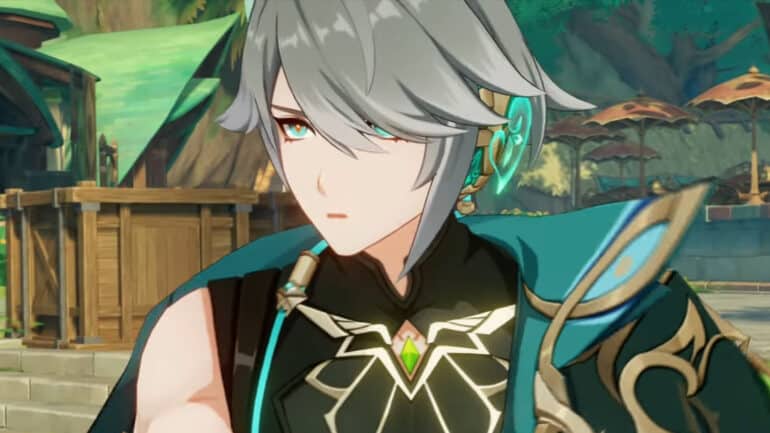 Alhaitham is one of the newly introduced characters in Genshin Impact’s Version 3.0, along with the addition of the new region of Sumeru. Nothing much is known about this character yet, however players can expect that he has a probability of becoming a playable character in the next few updates.

Alhaitham is a male character and is currently only a quest-exclusive NPC with the current update. He has a tall male body type, similar to Zhongli and Childe, and is a Dendro user adept at using a blade as seen in the Sumeru promotional video where he was sparring against Cyno. He is affiliated with the Haravatat of the Sumeru Akademiya, the ruling body over Sumeru.

So far, Alhaitham can only be encountered in the Archon Quest Chapter III as one of the main characters of the chapter. Based from some of the dialogue lines from other characters such as Collei and Tighnari, Alhaitham seems to have a very rationalized way of thinking, which made him look like a person that is hard to be around with, as recounted from the experiences of his housemate, Kaveh, a soon to be revealed character.

Alhaitham also shares a voice actor with Su, a character from Honkai Impact 3rd, with his Chinese voicelines. Plus, both characters do have a striking resemblance from each other.

Will Alhaitham become a playable character in Genshin Impact?

It is not certain yet whether or not Alhaitham will become a playable character that can be added in players’ rosters. But based from his character design, he does have what it takes to become a full-fledged playable character. Plus, Sumeru still doesn’t have a sword-wielding character, a role that Alhaitham can definitely fill.

We’ll be on the look out for more details about Alhaitham and the rest of the new characters as the story progresses in Sumeru.

Check out the promotional video for the new region Sumeru from the official Genshin Impact channel: