Learn how to respond in order to find Dori. 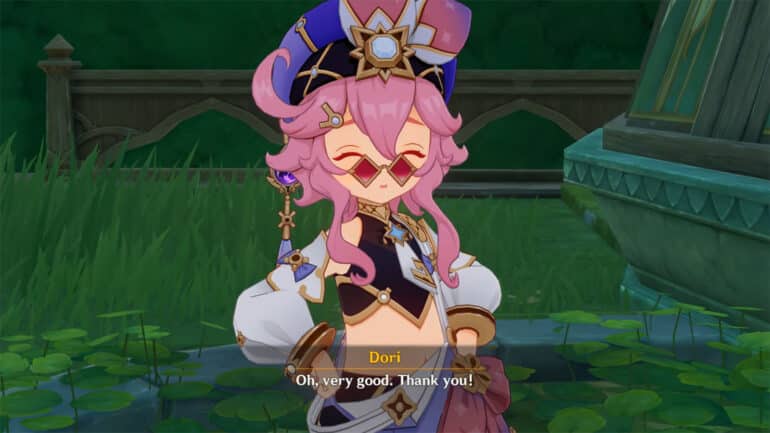 Lost in Prosperity is a quest under the Archon Quest Chapter III in Genshin Impact. In this quest, you will need to make your way to finding Dori, the Canned Knowledge merchant through the help of the other merchants in Port Ormos. The catch is that they speak in code in order to protect their business from getting seized by the Matra.

In this guide, we will be talking about how to solve the puzzles in the Genshin Impact Lost in Prosperity quest.

As you progress through Act I of Chapter III, you will eventually encounter Alhaitham as he saves you from being scammed by the Eremites. You decide to catch up with Alhaitham and he recommends for you to look for a merchant named Dori.

Alhaitham will also advise you that because of how strict the regulations are when it comes to trades in Sumeru, Dori keeps her business on the down low and will only talk to customers who know what they are looking for. He will then give you an Informant Code Chart which is a cheat sheet that contains the codes that the merchants use and what they actually mean.

Take some time to go through the chart as you will have to talk to a couple of merchants and respond to their questions correctly in order to be led to Dori.

For the first interaction, you will have to talk to a merchant named Latish. He will ask you as to what you are planning to buy between the two: raw Harra Fruits, or unripe Harra Fruits. The chart says that picking unripe Harra Fruits mean that you are asking to be brought to Dori, so choose this answer. Choosing the other option will not matter as you will be given another chance with only the right option available.

Next, you will be led by another merchant named Raunak. You will have another small conversation talking about another code, however Paimon will take care of it for you. As you arrive at another location, Raunak will tell you that all of their Harra Fruits were taken by mice. The chart says that “taken by mice” means that they were sold to customers, so choose the option to Congratulate him about it.

Fruits that will make one dizzy

Next, Raunak will compliment you about your skill. He then offers you some fruits that will make you dizzy, to which you have a choice to take it, or prefer a fruit that causes heatstroke. The chart says that a compliment for a customer’s skill corresponds to a fruit that causes dizziness and ringing in the ears, so choose to accept the offer.

Once you get Raunak’s full trust as depicted by the heart meter, he will then proceed to lead you to Dori, but it will be interrupted by the arrival of the Matra, so you decide to run away. Since you don’t know much about the lay of the land in Port Ormos, follow Raunak to where he runs to and you will eventually be called by Dori. Go through the entire dialogue with her and you will complete the Lost in Prosperity quest.

Check out this video by WoW Quests showing how to complete the Lost in Prosperity quest: