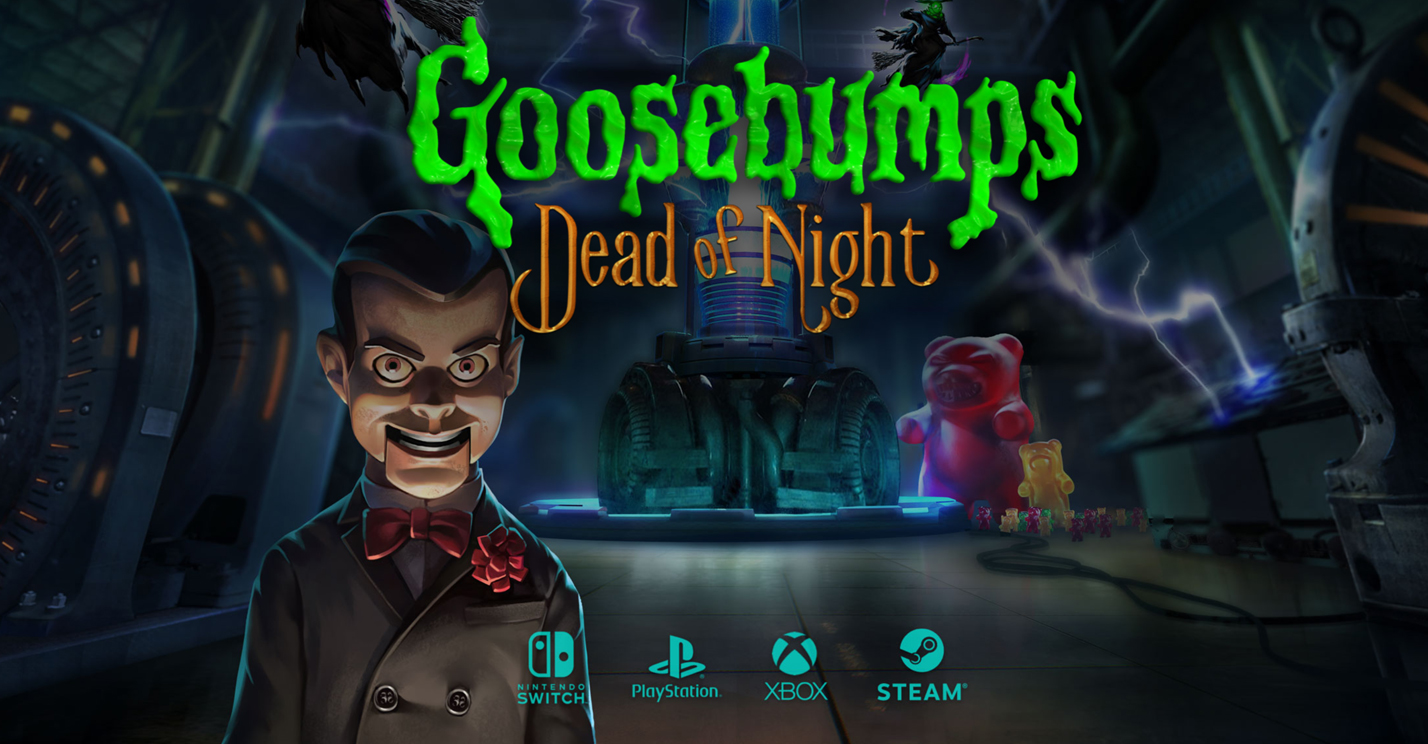 I have always been into books when I was a child. Particularly, the horror and suspense genre. R.L Stine’s Goosebumps are the few books that I was addicted to. It blew my mind when they released the choose your scare adventures since it was unheard of at that time. Until I went to high school, Goosebumps just died down and I never heard anything ever since. Until 2015, Goosebumps will now be released into a movie starring Jack Black. Errrrr…So, it’s not a horror film but a comedic one? Growing up with this really scary world that only R.L Stine could create, I was heavily disappointed with the movie and even upset when a sequel appeared.

Let’s add some more years to that and a video game about Goosebumps is being created and will be soon available to us. I am all for second chances and although I didn’t set my expectations high. I was excited about this and prayed to all the gods that it won’t be the same as the movie. Imagine my surprise! Not in a good way to say the least.

Goosebumps Dead of Night is actually just the first movie recreated into a video game. Genius! It gets worse though. The video game starts by showing us a cut scene where the author, RL Stine, gets attacked by Slappy, the demonic ventriloquist, and who also imprisoned him in his typewriter. You will then get to wake up in his study, with no explanation of how you dropped yourself there out of nowhere and a talking typewriter will now start to give a series of fetch quests.

The first act location is at the author’s house where he needs for you to get the book and complete the missing pages to imprison Slappy and stop him from terrorizing the neighborhood. While you navigate this 2-story house, gruesome monsters are thrown your way to try and stop you from completing the book. Even with the lights on, the place still looks dark and gloomy. The switch is there because in that darkness, Murder the Clown appears and will chase you. Not only him but you also have the Graveyard Ghoul and a Werewolf who will come after you if they see you. You will know once they see you since your console will vibrate and your screen will start to wobble differently. I honestly get terrified when they start to chase me and it seems fun to hide behind closets, under coffee tables, and inside a washing machine while they are in front of you, looking for you. They eventually give up and you can continue searching for those pages.

The second act was one of the most beautiful scenes of video games that I have ever seen. It’s like the lair of Poison Ivy right there and I was waiting for Batman to fly down the glass ceiling and save the day. But seriously, the artwork is really good and the flowers look amazing with the unique colors. You will also get to meet Margaret and Dr. Brewer. Just a tip, these characters love going back to their roots. The third and final act takes place in Tesla’s house where you acquire his shock gun and shoot the bejeezus out of evil gummy bears. This scene was cute for a few seconds. Then you proceed to engage Slappy in this ultimate battle between you and all the monsters you have met so far. Avoid monsters, don’t get zapped by witches and defeat Slappy is the pattern of this battle and in no time at all, you will emerge as the winner. Sounds easy and short? Big news – it is!

I finished the game in 2 hours and it could’ve been shorter when I didn’t die too much. Dying is a must if you’re one of those players who love to acquire the Platinum trophy. Most trophies are received through dying because of being captured by monsters or stung to death by bees. I can’t say for sure but probably this game is only meant for kids?

I love Jack Black but I didn’t appreciate it that it was only his voice that predominates this short video game. He is the author obviously but he also gets to voice Slappy, Dr. Brewer, and Tesla. I know he is not a stranger to the voicing of the video game world but even if no one told me it was him for all characters, it still sounds like him. I appreciate it that his voice is crisp with excellent intonation so I didn’t have to go, “What did he say?” Soundtrack wise, you get to occasionally hear the generic Goosebumps tune which is truly nostalgic and makes the adventure a little bit exciting. But others didn’t really stand out and honestly, I haven’t really noticed when I was going through the different acts of the video game. I don’t think that’s a good thing.

I am not happy about its animation. Slappy looks funny when he moves about. I hated it when my character leaves its hiding place, especially under the bed or table, the camera does a 360 turn before returning to his normal position. I mean, who does that in the real world? It’s dumb and makes me woozy after. To think you have to that often since you will get chased every now and then. Everything just looks so cartoony, the colors are bright but dull and the only scary monster there was Murder the Clown.

I had to believe that this video game was more than what the movie from 2015 offered. With the mash-up of every possible iconic horror monsters and the creativity of the Goosebumps world, I truly thought this would be a good scary experience relieving my childhood. Yet its another great disappointment and I recommend unless you want your kids to play this out, to sit this one out and just stream gameplay online.

Goosebumps Dead of Night – Review
Score Definition
You’ll be left out with a “meh” after finishing the game. What game did we just play?
Pros
Hide and Seek Mechanic
Conservatory Artwork Location
Murder the Clown
Cons
Jack Black Doing the Voice Over of Everyone
Unnoticeable Soundtrack
Unpolished Cartoony Animation and Color Choices
Short Story Gameplay
Zero Difficulty Option
4
Below Average