Guardians of the Galaxy – Where to find all Star-Lord outfits

A complete guide on where to find all Star Lord outfits in Marvel's Guardians of the Galaxy. 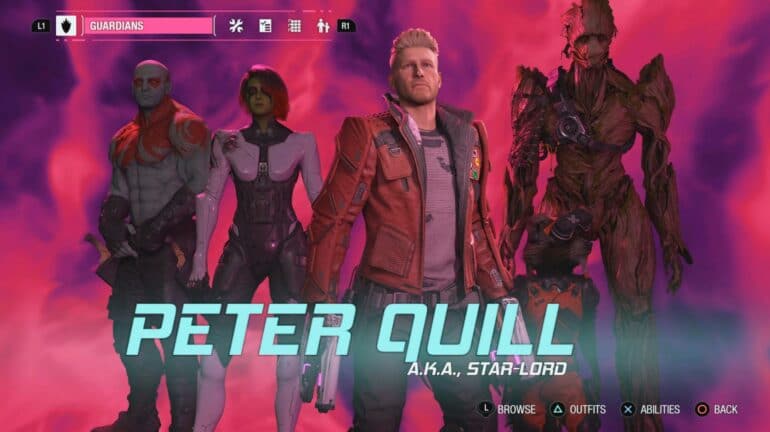 Super-hero games like Marvel’s Guardians of the Galaxy will always have cool outfits to find and unlock. You can be assured that Star-Lord a.k.a. Peter Quill has his own set of outfits to look for. Some of the outfits are familiar especially if you’ve followed the comic and the film.

By finding all Star Lord outfits, it’s one of the things you have to complete to get the Fashion Passion trophy on PS4 and PS5.

In Chapter 2 – you’ll be able to choose from several different conversation lines as Nikki speaks to you. You can select either “Encourage her” or “Take Control” as one of the options. In this instance, you should turn to your left and crouch under a gap in between some yellow pipes, rather than following Nikki as she has instructed. The outfit crate of the Nova Lord Outfit for Star-Lord can be found at the end of this area.

In Chapter 6 – Between a Rock and a Hard Place, directly in front of you from the balcony are some stairs that lead up to a platform with an enormous pink tree. Turn around and look for red pipes below on the right side of the platform from the tree. Cross the railing and go down to the red pipes below. The outfit chest that contains the Guardians of the Galaxy (2014) Outfit for Starlord is located at the end of the pipes, underneath a staircase that is almost missable if you don’t look closely.

Following your escape from the chamber where the first major enemy encounter takes place in Chapter 8, you’ll come across a cutscene in which Rocket warns the guardians against stepping into the red Warp Drive Fluid, but Drax decides to do so despite Rocket’s warning.

Follow Drax down the tunnel, through the fluid. Immediately after joining Drax, turn to the right to find a pillar and tell Drax to movel the pillar by the tunnel exit from which you just emerged. Make your way up to the top of the pillar to an area where you can find the outfit chest that contains Star-Lord’s Bad-Lord Outfit.

Soon after you unlock Groot and Gamora’s outfits in Chapter 12, after a series of additional enemy encounters, you’ll arrive in a sandy circular area where you’ll have to command Drax to move another large pillar so that you can continue. Looking to your right after using the pillar to climb up to the ledge, you’ll see a wall that Gamora can use to her advantage.

Anchor Gamora halfway up the wall and then jump to her in order for her to provide a boost. Make use of the momentum you’ve gained to get across the gap on your right and into a new location where you can quickly spot the outfit chest which contains the Apocalypse-Lord Outfit for Star-Lord.

It will take you to go through a cave and melting some ice to obtain the Plasma Element for Peter’s blasters after you have unlocked it in Chapter 13. Following your successful melting of ice from the ceiling and jumping over a dinosaur skeleton, look up again to see more ice you can shoot at the conclusion of the cave adventure.

Groot will be able to use the pad that is revealed as a result of this. Engage Groot in a conversation and lift the platform halfway up to gain access to a hidden alcove where the outfit chest is located. This location of the chest that contains the War-Lord Outfit for Star-Lord is just to the left of the cave entrance.

Somewhere in Chapter 14, you’ll have to make your way past a massive fan by pulling barriers that protect you from the fan itself. When you reach the end of the corridor, you’ll notice that the path forward is on the right. Hold onto the two ledges on either side of the path that runs parallel to it before continuing onwards.

After completing the story, this Star-Lord outfit will become available to you automatically. If you pre-ordered the game, you will unlock this early.

After completing the story, this Star-Lord outfit will become available to you automatically. If you pre-ordered the game, you will unlock this early.