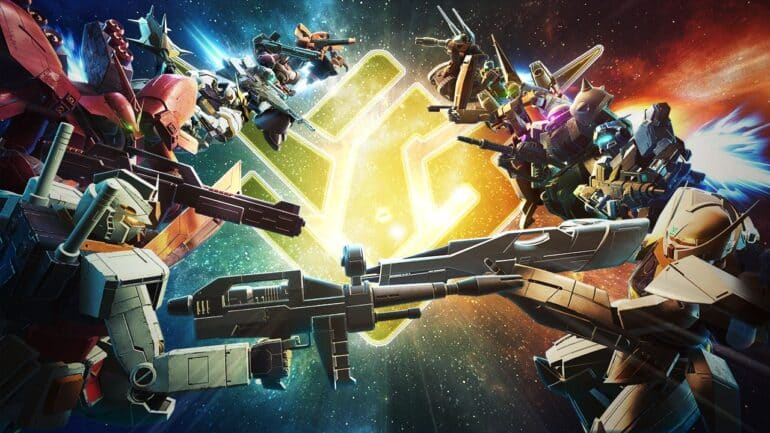 All the mobile suits and their abilities have been revealed for Gundam Evolution. In recent weeks, Bandai Namco has revealed so much about the game and who will be in this newly made Gundam game. This guide will let players know not only what are the playable units but also, their abilities and background as well.

Developed by Anaheim Electronics, this Gundam is one of the latest mobile suits to incorporate the Psycho-Frame technology to fend off Zeon remnants. Piloted by Banagher Links, this mobile suit combined with its psycho-waves resonates with the NT-D and becomes an unstoppable force. This version of the Unicorn is when it’s fully awakened. Whenever the NTD is activated, it usually glows in red but the sign of green glow signifies that the pilot’s Newtype abilities have fully synchronized with the mobile suit.

One of the mass-produced mobile suits developed by Zeon. This mobile suit is custom-made for Dozle Zabi, one of the lead figureheads of the Principality of Zeon who in his own right believes that those who carry the mantle of Zeon will lead them to a new era of the Universal Century. Unlike the normal Zaku II F-type, both of the Zaku II Dozle Zabi Custom’s shoulders are equipped with four spikes, while its hand armor has three spikes each.

The unique gold engraving on the mobile suit’s body was not Dozle’s idea, but rather the idea of the technical officer who customized the machine. Although it was originally intended for ceremonial use, Dozle went to the front lines in this machine on the pretext of inspecting the front lines and participated in actual combat with only a special large heat hawk.

One of the units featured in the Turn A Gundam series. This mobile suit is the mainstay unit of the Ghingham Fleet. Making its perfect mid-range type unit, it is equipped with a Mobile Trace system and uses artificial muscle fibers in its drive system. Powerful thrusters give the Mahiroo high mobility and atmospheric flight capabilities.

Combining designs from Zeon, Anaheim Electronics developed this mobile suit and deployed it by the Titans during the Gryps Conflict. Later on, it was used Zeon Remnants to fight off the Londo Bell and the Earth Federation. During the events when the Unicorn was being used, several Marasai units were used by Zeon remnants to attack the Federation’s Torrington Base signifying that other Anaheim-developed units were scavenged and used by Zeon on Earth.

One of the 4 Gundams used by Celestial Bring in Mobile Suit Gundam 00. Piloted by Setsuna F. Seiei, this suit has unlimited potential using its GN Drive. The suit focuses on melee combat and is adaptive in any environment. With all its capabilities, this suit’s main objective to eliminate any form of war will be completed as the will of Aeolia Schenberg to have humanity reach a new type of evolution known as Innovators.

The RGM-79 GM is a mass-produced mobile suit based on the RX-78-2 Gundam. Its basic frame is easily adaptable to modifications into mission-specific GM models, and has a fairly high level of mobility, for the time, both on Earth and in space. It has a maximum acceleration of 0.94 Gs in space, which is better than the Gundam’s and roughly twice of the Zaku’s. On Earth’s surface, the GM is also faster than the Zaku II.

One of the 1st 3 mobile suits was developed successfully by the Earth Federation. Though it lacks mobility, it has a high defense and its weaponry is strong enough to take down incoming enemies.

The Guntank’s main weapons are twin 120mm cannons, which are effective at long and medium ranges. Its arms have four-barrel missile launchers instead of hands, and they provided good cover fire against enemy tanks and aircraft, but are less effective against enemy mobile suits. A major flaw of the Guntank is its inability to turn its torso, making it difficult to aim the cannons at moving targets, as the Guntank must reposition itself. Another major flaw is that its design was primarily for ground combat, resulting in it having poor maneuverability in space.

A mysterious mobile suit was found within a statue known as the White Doll. It was built with extraordinary technology, and legend speaks of it laying waste to Earth’s civilization in a climactic battle long ago. Piloted by Loran Cehack, the Turn A Gundam changed the world with its mysterious capabilities and unknown origin.

Although the DOM Trooper was originally intended to serve as ZAFT’s next-generation machine, the Clyne Faction actually completed its design and deployed it in a battle to save ORB from the Zaft invasion. The DOM Trooper’s large, leg-mounted hovering units provide swift ground movement across all manner of terrain.

During the Gryps Conflict, Anaheim Electronics developed the first transforming mobile armor capable of self-sustaining flight within the Earth’s atmosphere for the Titans. The Asshimar’s lifting body structure allows it to alter its aerodynamics by transforming its upper body into a disc shape.

As one of the variants of the GM series, this suit was developed by the Earth Federations to snipe off incoming enemies from long distances. Its specs are on par with the RX 78-02 Gundam and have an array of sophisticated armaments and capabilities that rival the other GM suits made by Anaheim Electronics.

The 1st transforming mobile suit was developed by the AEUG to combat the Titans. Easily to pilot thanks to its simple transformation mechanism, its ability to support other mobile suits proved to be useful thanks to its energy supply cable. Like the Zeta Gundam, the Methuss was very fast and agile in mobile armor mode. However, as a prototype unit, it was only armed with two arm beam guns and six beam sabers.

After Char Aznable, the legendary Zeon ace reappears back to his colony, he establishes the 2nd Neo Zeon War and develops a suit capable to withstand his Newtype abilities. Its cutting-edge Psycho-Frame provides unparalleled responsiveness, making the Sazabi the pinnacle of Zeon’s Newtype design tech. With an overall height of 25.6 meters, the Sazabi is much bigger than most standard mobile suits, thanks to the use of lightweight armor materials and a great number of thrusters.

One of the 72 Gundam Frames developed during the Calamity War. First unearthed on Mars, it eventually became Tekkadan’s dominant battlefield weapon. Barbatos’ original form is reproduced by technicians at Teiwaz’s base, Saisei, based on ancient materials from the time of the Calamity War that had been recorded in their database The machine’s weight balance is stabilized, and the two reactors’ output and operation rate are also improved after extensive maintenance and overhaul. While Barbatos’s performance is now closer to its original state, it is still not yet at 100%.

Zaku II’s features improved on everything the previous model offered. It was faster, more durable, had a superior reactor, and could be fitted with more weapons. The Zaku II was the mainstay of the Zeon military for most of the One Year War. Even after the MS-09B Dom and MS-09R Rick Dom began to replace it on the front lines, the Zaku II still remained the most numerous mobile suit in Zeon’s armed forces.

The Gundam was incredibly advanced for its time. Trailing the Principality of Zeon in Mobile Suit development, the Federation developed this machine as part of Operation V to turn the tide. The Gundam was equipped with a sophisticated Learning Computer which would collect pilot and enemy data during skirmishes and allow the Gundam to operate more effectively.

A prototype mobile suit was developed by the Earth Federation Forces. This suit is equipped with a unique HADES operating system that grants superior combat performance, but puts an increased strain on the pilot and has limited operation time. It served as the core mobile suit of Grave’s “Pale Rider Project” and was deployed on various black-ops missions.

Check out this video made by Red Venom Corp. to see a preview of what are the mobile suits that are playable for Gundam Evolution including the skins you can equip in the game.