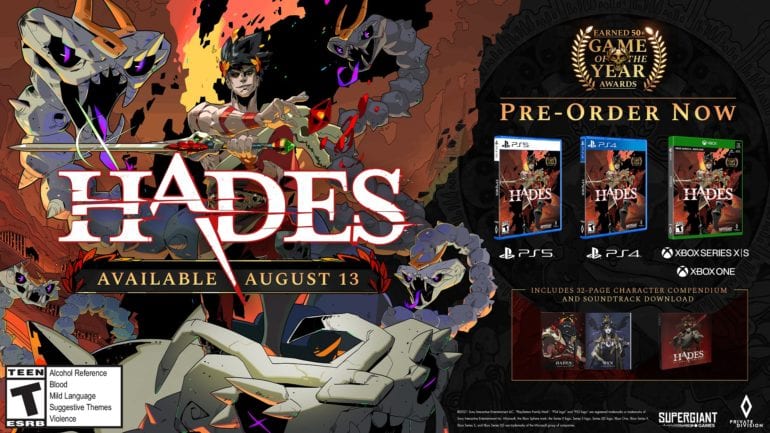 Game companies Private Division and Supergiant Games have recently announced their partnership to release a physical edition of the popular game Hades on consoles.

Private Division will be the one to publish the PlayStation 4, PS5, Xbox One, and Xbox Series X/S physical versions, which will be released in retail stores this coming August 13, 2021.

Hades is a rogue-like dungeon crawler in which players battle their way through the treacherous Underworld of Greek myth to freedom. A winner of over 50 Game of the Year Awards and boasting impressive aggregate scores of 93 on Metacritic and 94 OpenCritic, Hades will soon be available for the first time on PlayStation 4, PlayStation 5, and Xbox Series X and Xbox One consoles.

“We are enormous fans of Supergiant and every game they’ve released, as they are exactly the type of wildly-talented, independent developer we seek to partner with at Private Division,” said Michael Worosz, Executive Vice President and Head of Private Division. “As such, it’s very exciting to help bring Hades to retail, day and date, alongside its digital release on consoles. Hades has already proven its critical merit – and now we are happy to provide an opportunity for PlayStation and Xbox players to get their hands on a stunning boxed copy of this incredible game.”

The retail edition of Hades is perfect for collectors, as it contains bonus goods like a code that is redeemable for a digital download of the Hades Original Soundtrack. This soundtrack includes two and half hours of music by award-winning composer Darren Korb and featuring vocals by Ashley Barrett. Additionally, physical copies include a compendium booklet featuring the vivid artwork of the multiple denizens of Hades inked by Supergiant Games’ BAFTA Award-winning Art Director, Jen Zee. Finally, the first-run prints of physical PlayStation and Xbox copies will include an eye-catching metallic foil detailing across the cover art perfect for individuals looking to add a standout piece to their shelf.

“We have been blown away by the response to Hades and can’t wait to bring it to our fans on Xbox and PlayStation around the world,” said Amir Rao, Studio Director at Supergiant Games. “We’re excited to partner with the team at Private Division on the retail release to help Hades reach a new audience.”

Playing Hades on PS5 and Xbox Series X/S results in a technical boost, with the action running at 4K at a target 60fps. Xbox One and PS4 versions of the game perform at 1080p at a target 60fps. In addition, Hades features enhanced controller vibration and controller lighting on the PlayStation 5 DualSense wireless controller. All PS4 versions of Hades, both physical and digital, include a free upgrade to the digital PS5 version. The Xbox versions of Hades use Smart Delivery, allowing access to both the Xbox One title and the Xbox Series X/S title.