The poorly drawn caricature of Master Chief has a new voice, but we can't pinpoint who it is. 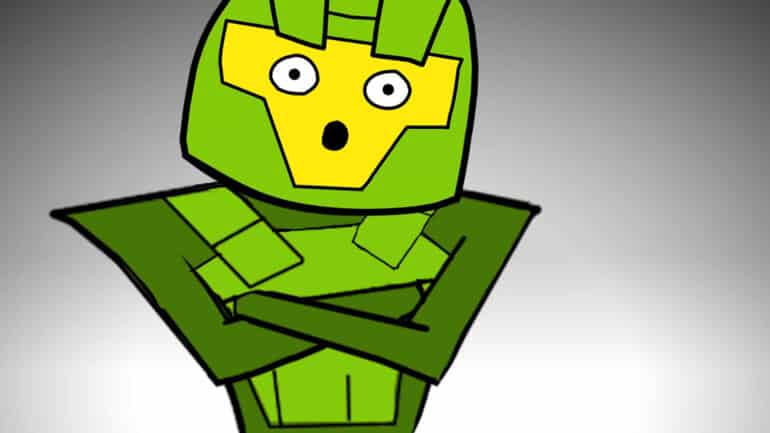 Halo Infinite’s marketplace just got refreshed a few days ago, and among the new stuff that got added was the Mister Chief bundle. The bundle costs $20 USD.

This Mister Chief Bundle in Halo Infinite which costs $20 USD or 2,000 credits include:

How To Get The ‘Mister Chief’ AI in Halo Infinite

The Mister Chief AI for your Spartan is very easy to get, just follow these steps:

But the bundle is actually a not topic right now, not because of nostalgia, but because of its price as most players say it’s way too expensive for what it’s worth.

It’s like an added insult to injury especially that the character was used to tell players about the REQ System, which was basically Halo 5’s way of adding microtransactions into the game, and it was done in a very condescending and dismissive way.

It’s a whole ‘nother topic of a larger issue in today’s gaming industry, but something else about this bundle has caught our attention.

Here’s a video by The Game Center for every Mister Chief AI Voiceline:

Plenty of avid Halo fans has noticed that Mister Chief’s voice changed. Back in the REQ System video, Mister Chief was voiced by Nick Offerman, best known for his role as Ron Swanson form the sitcom Parks and Recreation.

The Mister Chief in the bundle has a different voice actor, and there’s currently no official details yet on who the voice actor is. We tried to look for more info, but the best we found so far are guesses from people in the comment sections and threads. Here are some of the closest guesses that we agree on.

Who could be Mister Chief’s voice actor?

Nolan North has voiced quite a number of video game characters, such as Desmond Miles in Assassin’s Creed, and Nathan Drake in the Uncharted series. He’s a safe guess because of the range of his voice, but we’re just not quite certain about it yet.

JohnnyUtah is known for creating the TANKMEN series in Newgrounds and has voiced one of its characters known as Captain. There’s some resemblance, but there’s just a bit of raspiness with the voice.

Chris Parnell is best known for being the voice of Jerry Smith, Morty’s dad in Rick and Morty. Kinda close, but Parnell has this signature vocal fry, which is quite hard to tell if Mister Chief also has it, considering that his voice has been tuned to sound more robotic.

Matthew Mercer is known for voicing Leon Kennedy in Resident Evil 6 and as the Dungeon Master of the web series Critical Role. Okay, this one may be a bit of a cheat since Matt has quite a versatile voice, but he’s still a close guess and we can definitely hear him as Mister Chief.

Nathan Fillion is best known for his roles in TV series such as Firefly and Castle, and he has also voiced Cayde-6 from Destiny and Spartan Edward Buck from the previous Halo games. We think, out of all the guesses, that he’s the closest one. Like Matt, it’s easy to imagine Nathan saying Mister Chief’s voice lines.

Whoever it is, it’s best to remember that most of the recent backlash surrounding the bundle is about its pricing and the bad taste that the REQ System tutorial left; it’s not thrown towards the actor behind the character. We’ve even seen a few comments saying that they may even have looked past the price if only the game kept Nick Offerman as the voice of Mister Chief just because they want to hear Ron Swanson talking in the background.

Then again, all of these are just guesses. Soon enough, official details about the voice actor will come to surface. Will it sway the players’ opinion about the bundle? We doubt that will happen, but who knows?

If you’d like to read more about a different Halo Infinite AI, check out this article: