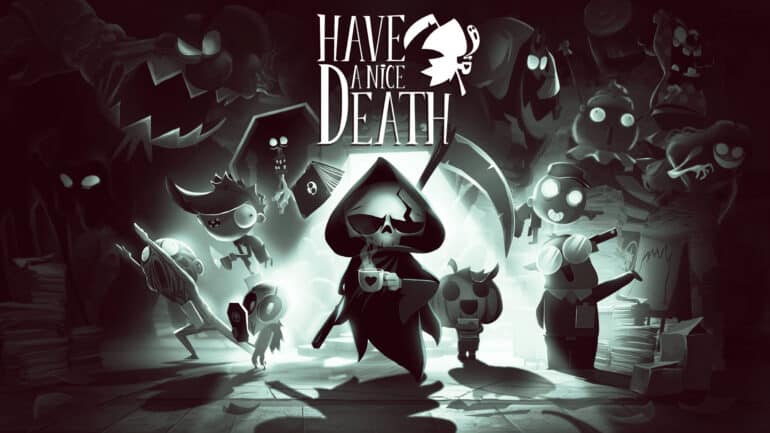 In Have a Nice Death, Death is the CEO of Death Inc. aka the one responsible for receiving and processing souls to the other side. But what happens if Death gets burned out and starts making rash decisions? Things go from bad to worse, fast. And to prevent a complete breakdown of the system, Death has to get his bony butt off his chair and restore order back to the company by knocking some sense into some rogue employees.

Developed by Magic Design Studios, Have a Nice Death is an action platformer roguelite set within the confines of Death Inc. Players take control of Death as they try to wrangle rogue employees, called Sorrows, back in line. The Sorrows’ were originally created to make Death’s job easier. But the Sorrows quickly found out that they can make more money for themselves by spreading misery and chaos. This, in turn, added the number of souls that need to be processed, as well as Death’s headaches.

The task of bringing order back into the company starts from the CEO’s office and ends when the CEO visits all departments and has a “chat” with its designated Sorrow. The path to their places of work is a long and winding one and is constantly patrolled by hired grunts. (Mostly underpaid, overworked temporary workers)

Of course, anybody who dares look at the boss funny is bound to be on the receiving end of a swift scythe combo. And this is probably the best thing about the game, in my opinion. Death’s scythe is so deadly that using it alone is already pretty satisfying, and coupled with the game’s limited healing options, often made me feel like I’m on the verge of dying every single run. But to me, that just means that every action is calculated and any unnecessary movement could lead to disaster.

And this is where Death’s cloak comes in. Death’s cloak allows for two different attacks using weapons and spells you’ve picked up along the way. The extra attacks add a different spin to your run as you never really know what you’ll pick up and sometimes having them is better than not having anything at all. The spells are most useful at range and most of the melee weapons do burst damage but come with a short cooldown. Half the fun is mixing things up every single run. I’ve even had run when I’ve taken far too much damage but the weapons I picked up during that run extended that run far longer than it should have.

The objective on each floor of Have a Nice Death is to reach the end of the hall and enter an elevator to advance further. And even here, luck plays a part whether you like it or not. Sometimes you’ll have the option to go to the floor with extra Soulary (money) or a vault housing new weapons or spells. And sometimes, you have no other option but to face a mini-boss en route to the main boss. Which sucks but I kind of like it.

Among all the resources you can collect in your run, none are more precious than Prismium. With Prismium you can upgrade weapons and spells. It usually takes 100 of your hard-earned Soulary, but you can trade a single Prismium instead. Prismium is also the only resource that allows you to transform the scythe, giving it extra functionality like extended range or double DPS.

What defines a run ultimately lies in the hands of Mr. O’Shah, our Health and Safety inspector. Through him, we get to choose one of three bonuses. These bonuses often determine the pace of your current run. And I simply cannot get over how impactful these bonuses are. I’ve had runs when I thought that I was doing things one way but after putting two bonuses together, I ended up doing something completely different for that run. Which is surprisingly very fun.

When you inevitably go down during one of your runs, you earn gold ingots for your troubles. These allow you to buy weapons, spells, and food that are then added to the pool of collectibles you find throughout your run. What I like about how this game does this system is how the price of one add-on lowers the more you clear certain conditions. It encourages more encounters with enemies, a lot better than ignoring everything just to reach the boss.

Usually, I don’t like elevated levels of randomness in my games. But I’m willing to put all that aside for Have a Nice Death. Sessions are short and when you are dealt a bad hand, you can quickly get back on your feet and try again. Oh, and about that. I don’t know how many lines this game has but I can already tell that there are so many different interactions with the staff and different comebacks that are brought up every time you talk to a Sorrow. I have only ever seen a handful of repeated lines despite the fact that I’ve died dozens of times.

The one and only thing I didn’t like about the game is that it somewhat forces you to play either extremely safe or playing as reckless as all hell. In this game, healing is a luxury that only pops up occasionally. You are lucky to find some coffee after defeating enemies, and chances are you took damage to get back health. It’s real easy to get paranoid in this game. It doesn’t help that if you get hit a couple of times but those beefy managers, you can probably call it quits. Cause that’s nearly half your health gone before even getting close to a boss. At that point, I’d say just do a repeat.

Since the game’s currently in Early Access, it’s slowly getting more content that’ll surely shake things up in the future. For April, the game’s getting a new challenge mechanic, an expansion to World 5 (War Ward), and a new Thanager (mini-boss) for Worlds 1 and 2.

And there’s more on the way as the Summer 2022 content update hints toward things like *Junk Food and *Accidents. It’s fair to say right now that the best has yet to come.

For what we’ve got initially, Have a Nice Death is showing a lot of promise. It’s still in Early Access and it’s already looking like a complete experience. Granted, there are some balancing issues to address and there’s always room for more content. (Maybe more characters to talk to. Who knows?) But yeah, Have a Nice Death is an awesome game and I can’t wait for its full release. I might even start from scratch. Worth it, I’d say.