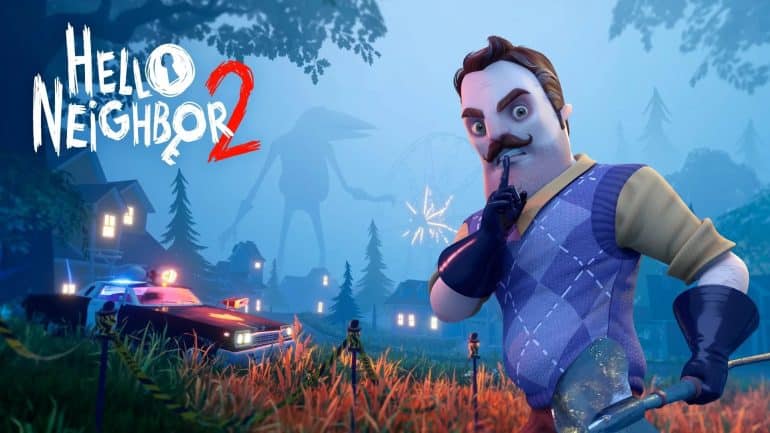 What happened in the Hello Neighbor 2 ending?

In the Hello Neighbor 2 ending, Quentin finds the missing child, Aaron, in the attic of the museum. After unlocking the main door, Quentin and Aaron make an escape however the large crow statue falls from the ceiling and on Mr. Peterson. Instead of running with Quentin, Aaron instead goes back to help Mr. Peterson as a mysterious figure knocks out the protagonist from behind.

This raises a lot of questions than actual answers. Why did Aaron go back to help Mr. Peterson instead of running after being locked in the attic? Who was the mysterious figure that knocked out Quentin?

It is unfortunately impossible to really know who hit Quentin. Even if you manage to view it from a third person perspective by tampering with the game’s files, there’s no actual rendition of anyone hitting Quentin. It’s just a shadow that floats behind before Quentin falls into the ground and the credits roll.

As for why Aaron went back to help Mr. Peterson, it is strongly hinted that Aaron is actually Mr. Peterson’s son. A prequel game Hide and Seek reveals that Aaron accidentally that he accidentally pushed his sister, Mya, to death. Despite being locked up in the attic, Aaron still loves his father enough to help him when he’s in danger.

There are a few guesses as to why Mr. Peterson is locking up his own son in the attic. He may be trying to protect him from something that seeks to hurt him. Or he may simply be overprotective of his remaining family after losing his wife and daughter.

It definitely seems as if Aaron wants to escape Mr. Peterson, however he was hesitant at the last moment due to his father being hurt. When Quentin finds Aaron in the attic, he doesn’t seem to have any physical injuries. So it’s unlikely that he was being abused.

While Hello Neighbor 2 does have DLCs which provide additional stories to explore, none of them really provide much answers for what happened in the main game. Instead those DLCs act as separate installments in their own right so we’re left without any answers as to what happened to Quentin, the guy we’ve been playing as the entire game.

As you reach the end of the credits, Hello Neighbor 2 does promise some big updates that are coming. We aren’t sure if these will provide some answers to what happened, but we’ll have to be patient.

This Youtube video from FoxPlay shows a third person view of Quentin being hit by the shadowy figure at the Hello Neighbor 2 ending.