A fun game with a lot of personality. 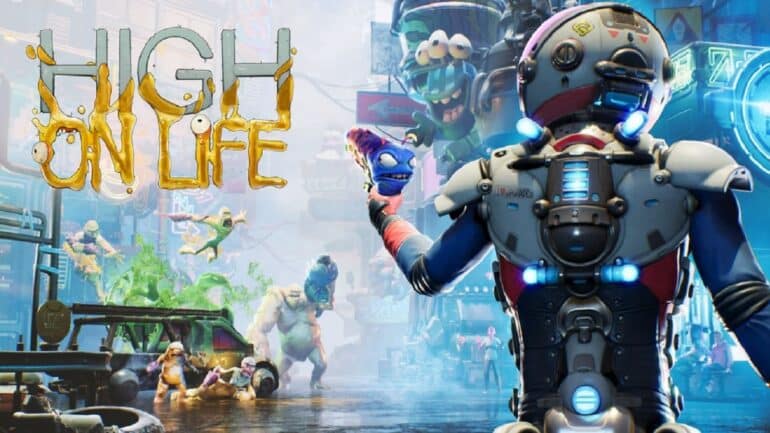 In the spectrum of things that are really weird, High on Life breaks the scale and turns reality over its head. There’s almost nothing resembling modern-day life and you’ll never feel so much like a fish out of water. And considering that you’ll be surrounded by bizarre alien environments, this was most likely the intended outcome.

High on Life is a first-person biopunk shooter that revolves around its self-aware satirical humor. You play as a typical nobody overshadowed by their overachieving sibling before aliens attacked the Earth. In the ensuing chaos, you managed to pair up with a talking alien gun and thus started a quest to save the Earth. Despite being transported to an alien society, you quickly adapt and become a competent bounty hunter to put an end to the G3 cartel that’s threatening the human race.

It’s almost impossible to separate comparisons of High on Life to Rick and Morty or Solar Opposites. That’s because Justin Roiland, the co-creator of such shows, is a driving influence in the creation of this game. A lot of the type of humor from those shows carries over to High on Life. Whether you’ll like the humor or not, will depend on your personal taste.

While High on Life is a first-person shooter, a lot of the game’s driving force is more on its satirical comedy. There are a lot of dialogue exchanges, obvious adlib, and gallows humor on every level of the game. So much so that the game never takes a break from constantly trying to be funny.

The difficult part in recommending this game is deciding whether or not this is your brand of humor. Even with the apparent comparison to Rick and Morty, I’d say High on Life has more things in common with Solar Opposites. There is a suffocating presence of alien life that is outright bizarre and apathetic to all forms of life; especially their own. Almost everyone you’ll meet is an asshole in one way or another.

Speaking of people you’ll meet, the lack of human presence in the game severely limits our companionship with the alien guns. You have your sister who is as confused as you are and that’s about it. The Gatlians, the talking guns that probably make up for 70% of the game’s dialogue, never really feel like characters you can get attached to. Maybe it has more to do with the fact that they’re talking guns or they’re too busy trying to be funny and quirky for me to form any kind of attachment, with the exception of Kenny. If you really don’t like their commentary, then you have the option to minimize the Gatlian dialogue when it’s only necessary.

In fact, the quest to save humanity by stopping the G3 cartel almost feels like a paper-thin motive. While your mileage may vary, I feel like High on Life lacks the emotional payoff that it should have despite being a game centered around comedy. Especially since the humor in the game can be pretty hit-and-miss depending on what you like.

On the other hand, the shooting in High on Life is actually quite fun especially once the game starts to open up. You’ll get access to better equipment that keeps combat from being stale – be it a slide that propels you forward or a jetpack that allows you to reach higher areas.

The gunplay in the game is fast-paced and you’re encouraged to move around frequently in order to avoid incoming fire rather than take cover. Thanks to the many tools at your disposal, you’ll be swinging, dodging, and hovering around the environment as you use the many Gatlians, each with their own mode of fire, to take out the many goons of the G3 cartel.

The Gatlians also double as a way of getting around. So they’re more than just different weapons to take out enemies with. Gus, for example, can fire discs that attach to certain surfaces allowing you to platform while Sweezy can slow down time letting you bypass or use fast-moving objects. I like the fact that each gun serves its own purpose so as to not make any Gatlian worthless when you find a new one.

While there is plenty of variety in terms of enemy types, I was a bit disappointed that most of the G3 cartel bosses winded up being rather forgettable. Most of them weren’t much beyond their funny gimmicks and I didn’t find myself too invested in my quest to take them down. They were amusing for the short time they were on screen but never enough to really make them interesting.

I did question some of High on Life’s choices in game design. Early on, you’ll get the option to pick a character appearance from six different presets. Considering that this is a first-person shooter, there’s really no relevance to this as customizing your appearance or making any modifications is moot in this game.

High on Life is best enjoyed if you take it slowly and chew the scenery. A lot of the really good stuff comes from just watching the background and seeing how bizarre the alien environment is. I can’t say I don’t appreciate how detailed the environment is when Squanch Games presents us with weird TV shows and alien advertisements.

I will say that some of the jokes in High on Life are rather clever. One joke involved me teleporting from a busy street into a poisonous river just so I can cross. While the drivers high on road rage initially threatened to kill each other, they eventually reform into a side highway society that worships something called Lord Asphaltia.

Some jokes can feel nonsensical though. At one point, a strange alien creature was selling me alien cum and I couldn’t really figure out what the punchline was. It sort of feels like Justin Roiland and the rest of the developers just threw out every joke they could think of. It turns out that you receive an achievement if you complete the game with it in your inventory. I guess that’s the joke. There were plenty of times when I enjoyed the dialogue, but there were also moments when I wished that the game would just give me a moment of peace.

High on Life is quite a polished release. I had no problems running it without any problems despite my mid-tier PC build. With my RX 5500 XT, I was able to run the game mostly on high settings albeit with some concessions.

I did face some issues though. It seems that Squanch Games may have forgotten to put a few walls on where they should be because my curious self winded up falling into a ditch a handful of times. However thanks to the game’s generous checkpoints, this never became a problem.

High on Life is ultimately more fun than it is funny and whether you’ll like it will largely depend on if you like the style of comedy from the mind of Justin Roiland. I had a blast going through the weird alien environment and seeing what bizarre concept was waiting for me next. It’s a game that just aims to have fun without being overly complex with its mechanics. We give it a strong recommendation for those who want to try something new and unique in the genre of first-person shooters. 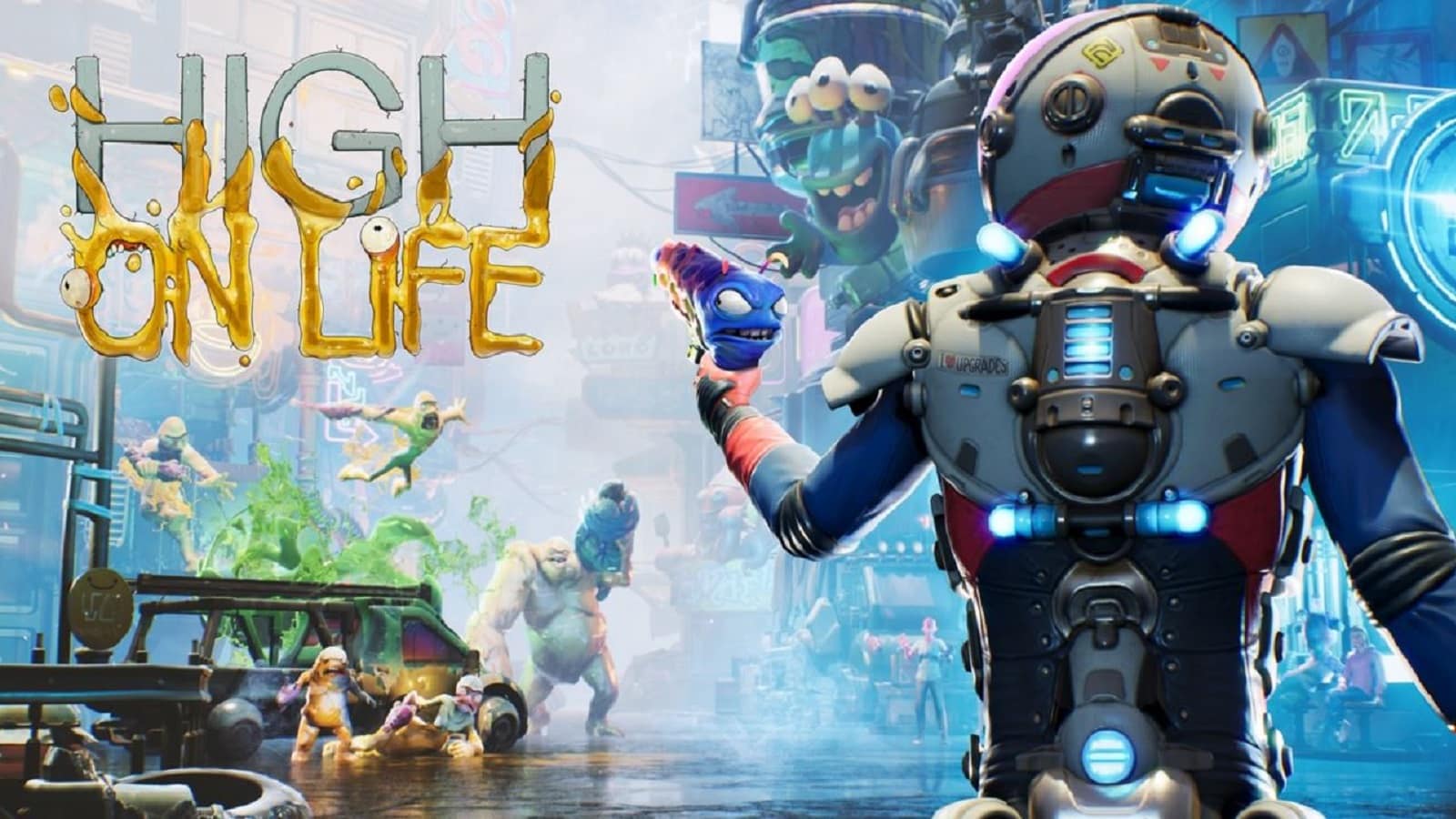 High on Life – Review
Score Definition
When the issues of a game are rolled and stomped by its greatness, then it’s something to invest on if you have some spare.
Pros
A fun, wacky adventure for mature audiences
Rich, detailed environment
A game with a lot of personality
Cons
Relies too heavy on its sense of humor to carry itself
Lack of emotional payoff
Dialogue can be a bit annoying at times
8
Great