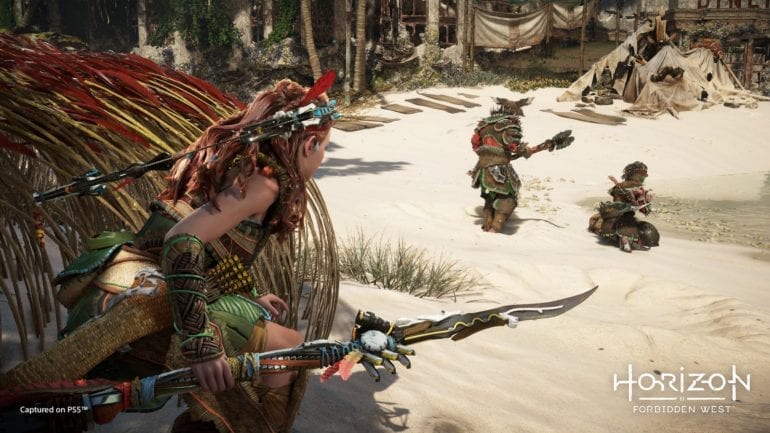 In Zero Dawn, human combat was not that complicated. Hitting enemies on the body inflicted less damage compared to the head, which usually kills them in one shot. de Jonge tells us now in a recent interview with media outlet IGN that this has changed for the better. It is more challenging now.

As evident in the recent State of Play video, players will now have to find ways to exploit a human enemy’s weakness in order to deal more damage. The human raiders have armor that protect them against arrows and melee attacks, which is why players will need to Focus scan to find a “chink in the armor”.

“With the machines, the combat is pretty tactical. And there’s always multiple ways you can take them down. With the Focus scan, you can scan the machine, check out what are the weaknesses and what are the interactive components… So for this game, we [thought] with the humans, what if we Focus scan them? What kind of things could we see, and what kind of extra things can we put on them to evoke this tactical play around them,” de Jonge explained.

“We’ve added armor on them. You see this after Aloy has taken down one of those Raiders, and she runs towards the next one, she starts meleeing and hitting him. Several plates light up on him. And this is armor that can be knocked off, so you expose more vulnerable parts, as well, that you can then shoot at.”

Aloy also has that new move of hers that unleashes tons of electrical damage on her enemies. It is the finisher-style move Valor Surge, which can be used against a large foe. This will be useful against such strong foes that need to be brought down by a more powerful attack before moving on to the next target.

Human combat has now evolved for the better.

Horizon Forbidden West will launch within this year for PS4 and PS5.