Exploration and combat gameplay improved for the better! 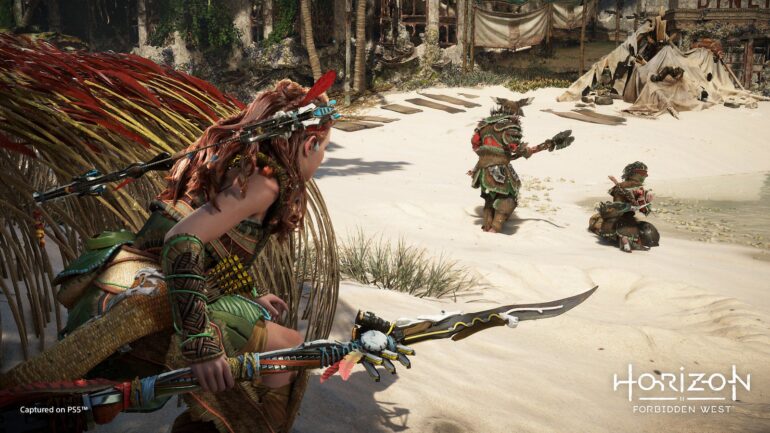 The developers discussed Aloy’s new abilities that were not available in the first game, Horizon Zero Dawn. These new abilities include climbing freely on and across huge sections of rocky terrain, new machine types that can be ridden, grapple points that can be found almost everywhere for agile vertical traversal, swimming underwater, and gliding with the Shieldwing.

Lead Systems Designer David McMullen revealed that their traversal design decisions were for increasing Aloy’s dynamic interactivity with the world around her and as player you would enjoy that kind of interactivity. These would allow them to manipulate and destroy the environment with a tool like the Pullcaster. They can even pull off some new tricks like grappling onto something and launching Aloy into the air then glide with the Shieldwing to set up for a strike from above.

The developers wanted the players to outsmart them by using the new moves or tools to bypass the challenges they have implemented into the game in clever and unpredictable ways. They do not want the usual solution for their puzzles, they want their players to experiment and have fun with the new tools they are offering.

McMullen shared that the DualSense controller is heavily featured in their mechanics. Players will be able to feel the sensation like the scrape of rubble as they push a crate or unravelling the winch as they use the Pullcaster. The adaptive trigger also increases that immersion by adding trigger tension as they pull.

In terms of climbing rocky surfaces, it was now possible to do that without tribal handholds, which were common in the first game. This time around you can now climb those rocky surfaces if Aloy can hold onto the cracks. There will be line indications that will tell the players that this part of the surface can be climbed.

There is also the high vault traversal mechanic, which allows Aloy to position herself on top of any object with enough space to pull up on. This makes exploration even better than before.

The Pullcaster and the Shieldwing are two new tools that Aloy can use during exploration and even in combat. It makes her more agile than ever before.

The Pullcaster is a mechanical wrist-mounted gadget that has two functions. The first obvious one is the grapple mechanic that allows Aloy to easily ascend the environment. When they grapple, they can also activate the launch, which throws her into the air and let her land on a ledge where should would have the upper hand or just grapple on to another point.

The second feature of the Pullcaster is the winch. She can dynamically manipulate, move and destroy objects in the environment. She can pull a hidden loot from a ledge or tear open a vent so she can find another way in.

The Shieldwing allows Aloy to glide from a higher terrain to the ground safely. It can also give her the opportunity to slowly and stealthily glide near a target.

Lead Combat Designer Dennis Zopfi explains the new combat system for Horizon Forbidden West. He revealed that there are now several ways for Aloy to do combat and her ability to create new weapons, outfits, and more. She can now customize all of her equipment, outfits, and weapons on the workbench. It can unlock new perks, mod slots, skills, and more.

The skill tree has been redesigned in the sequel. While it has retained some of the features in the original game, the sequel’s skill tree has been tweaked with additional tracks and skills. Skills can also synergize with those that are either already present on outfits or need to be unlocked on them.

Zopfi revealed the Resonator Blast, a new mechanic where players charge up to the spear with melee hits and when it fully powers up, the energy can be placed on enemies and it follows up with a projectile that results in a big explosion.

The Valor Surge is a new feature with 12 in total. Each represents and strengthens a specific approach. Players can unlock and upgrade them via the skill tree with skill points. There are three levels for each Valor Surge. The higher the level is, the longer the charge up, but also the attack becomes more powerful.

Since enemies can now mount machines, players will have to be more careful and observe them before launching their attack. They will either take out the humans or the machines first and each of them have their own abilities that actually compliment with each other. They would also have to look out for the consequences for taking out either one component of the rider and the machine.

Gameplay is more dynamic now in Horizon Forbidden West and allows more creativity in either combat or exploration. With the tools the developers have offered, they are looking forward to what kind of methods the players are going to use.

Horizon Forbidden West now launches on February 18, 2022 on PS4 and PS5 after getting delayed.