A visually beautiful game with a compelling narrative and magnificent character development. 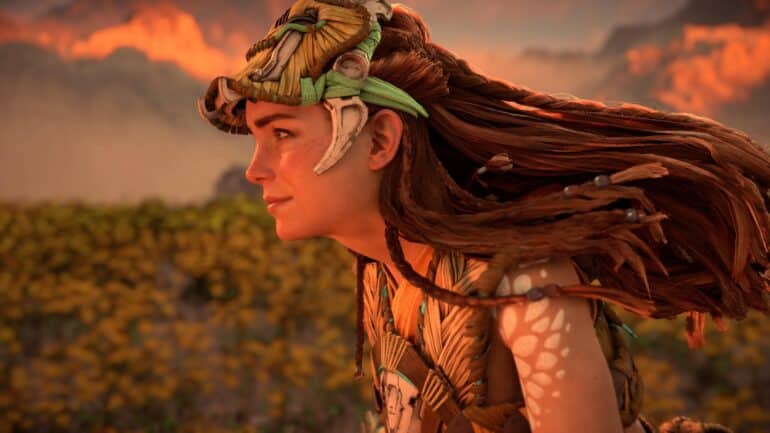 Earth is decaying, deadly storms wreak havoc and our red-haired Nora hunter is the only key to humanity’s survival. But what awaits our hero in what the other tribes of the east call the Forbidden West?

Horizon: Forbidden West kickstarts immediately 6 months after the events of the first game and it takes place in the western region of North America. As Aloy sets her path to a journey to save not just Meridian and the other tribes in the East but the entire world, she is joined by familiar allies and faces a deadly force they have yet to fully understand.

Its expansive new area in the west gives a lot to discover about the Old Ones, what they consider to be the “ancient” civilization thousands of years before Zero Dawn, and culturally different tribes that are nothing like the Nora and the Carja in the eastern region.

The tribes, namely the Tenakth, are a group of fearless and courageous warriors who are greatly inspired by the soldiers of the Old Ones; The Utaru are vegetarians and value the machines with an emotional connection through songs, and there are the explorative Quens who came from outside the continent.

All of the tribes are impressively fleshed out, having their own backstory that strengthens not just the story but the entire lore of Horizon: Forbidden West through side quests.

Every side quest you take doesn’t feel cumbersome and repetitive. While some do give a sum amount of challenge to complete as you’ll be facing far dangerous foes, these side quests reveal more of who Aloy is, and the consistency she shows towards her affection to humanity, while also expanding the game’s narrative.

I enjoyed my time taking a few side quests like helping install reboot codes on machines to reignite the hope of the Utaru tribe and even helping a Tenakth chaplain to help convince the tribe that the grandson isn’t a traitor. I’ve cared about this magnificent world, and Guerrilla Games’ world-building is stunningly remarkable. My entire 36 hours (according to my hours “played” on PS5) were spent more on exploring and doing side quests.

Much like Zero Dawn, quests are still divided into different types. You still have the Main Quest that tackles the game’s storyline, side quests that expand the game’s narrative and offer additional experience points, and errands. However, there’s more to do in Forbidden West.

New challenges like the Melee Pit puts Aloy to face enemies in a small arena and Salvage Contracts are fetch-quests that offer better rewards and gear. It’s a great way to steer away from the main quests when your mind is overloaded with deep narrative, and it’s also a good alternative to level up and get better gear.

I always find myself satisfyingly striking down Tenakth warriors in the pit and being able to practice my melee combos without the fear of dying. Melee Pits helped me tremendously to familiarize myself with the attack and dodge timing windows.

In the vast open-world of the Forbidden West, you are filled with so many activities that would be worth your time when you explore. Side activities such as the Gauntlet Runs where you race against other Tenakth natives, play a board game called Machine Strike, and explore a few Relic Ruins for some lore and rare loot. I appreciate the amount of content the game has to offer, and a reason to keep coming back into the world of Horizon from time to time.

Combat has greatly improved all thanks to the expansive skill tree and the new weapons you can wield.

Forbidden West now offers a better variety of weapons for unique situations like the all-new Spike Throw, a throwable spear that detonates after a few seconds, plus you still get to use some familiar tools like the Ropecaster if you want to temporarily disable enemies, or the Tripcaster if want to lead enemies into a deadly trap. And my personal favorite is the Boltcaster which can be turned into a ferocious light machine gun.

The Boltcaster is a real damage dealer. As you upgrade this machine-killing weaponry, especially when you unlock the Ultra Shot weapon technique, every enemy you encounter feels easy to take down; however, the slow reload time takes away the ravaging effect of Boltcaster after you’ve emptied out your bows. It’s a nice trade-off that makes Boltcaster prone to any abuses.

The skill tree is one of the most notable improvements as it offers two new special abilities that aid Aloy in combat: Valor Surge and Weapon Technique. The Valor Surge has a temporary special effect that can either maximize your survivability rate in battle or give your attack damage a brief boost. You can, however, only equip one at a time.

The implementation of the Valor Surge encourages players to use them when the situation calls it, and I only use it if I find myself in a difficult scenario to get out from. A great example is when I had to face a stronger, hard-to-kill Apex variation of a machine. The Apex Thunderjaw killed me a few times in one of the main quests without me using a Valor Surge ability. I’ve decided to activate the Toughened Valor Surge, and the battle became even. The Toughened Valor Surge gives Aloy the ability to quickly heal and resistance boosts from specific types of attacks.

The Weapon Technique adds a new layer of mechanics in combat that gives players the option of how they need to approach a certain battle. Hunter Bows can fire a Focused Shot weapon technique that deals more damage, while the Boltcaster can rapidly fire arrows by using the Ultra Shot weapon technique. The variety of weapon techniques for each weapon can give players mixtures of fighting styles whether you’re a melee fanatic or a skill ranged warrior, I’m glad there are options for every type of player out there.

The Weapon Technique and Valor Surge add a new slew of fun when combating against enemies, may it be a machine or a person, there’s a special kind of attack that gratifies the want of a varied approach in battle.

It’s wonderful to see that there are new tools for Aloy to use in specific situations. You have the all-new Pullcaster to literally pull anything from a pile of weakened rubble, a cart, and even unreachable treasure chests, and you can even latch on ledges when possible. Plus the Shieldwing acts as a glider when you jump off from high places. While these new tools serve Aloy to overcome platforming problems, they too can be a useful tool when battling against enemies. It’s a great way to get to a better vantage point, opening new sets of possibilities when you fight enemies which make each encounter feel unique and varied.

The addition of underwater and sky traversal paved way for new experiences and exploration. Aloy gets to swim further into the depths of lakes to uncover more of the Old One’s secrets and history and open crates for additional loots, and she can also finally ride a flying machine. While underwater traversal seems cool and nice, the absence of underwater combat may feel underwhelming if you’re expecting it.

Fighting against a crocodile-like machine called the Snapmaw in the water would have been exciting. But Guerrilla Games has their reasons why this isn’t possible. Common logic does state that, even in real life, you can’t fire a bow underwater, so literally, it’s impossible. Aloy and the other tribes have still yet to figure out how to make a viable weapon suited for maritime combat. Hopefully, if a sequel is to happen, we can see Aloy fighting enemies underwater.

Character development plays a big part in Horizon: Forbidden West as several key characters from Zero Dawn like Erend and Varl, and a few others join Aloy in her quest to save the planet. Two characters, in particular, that caught my interest, are Alva, one of the Quen’s Diviners who can wield a Focus, and Kotallo, a loyal Tenakth warrior.

Alva’s thirst for knowledge and curiosity is backed by a magnificent voice-actress that fits her enthusiastic aura. She’s one of those characters that you immediately feel reliable and trustworthy; while the brave and stoic Tenakth warrior Kotallo impresses you with his “no-bullcrap” answers and honesty despite being disgraced by his own clan.

Guerrilla Games took time to develop these characters compelling and interesting enough for the players to get to know them.

Forbidden West is by far one of the best-looking games this year. The level of detail you see is sharper all thanks to PS5’s capability to run 4K natively on the console. You get mesmerized by the spectacular views when you’re exploring the skies on a Sunwing, or simply on top of the tallest mountain overlooking the Forbidden West region.

The game offers two different modes, one specifically for performance that pushes framerates to 60 with a lower resolution but makes the game a lot more responsive. While the other ups the overall clarity by increasing the image output to 4K but locked to 30 frames per second. Even if it’s running on performance mode, the game still looks great on a huge 75″ TV screen and it’s a major improvement from the first game.

The DualSense implementation is something not to dismiss. You get to feel different kinds of sensations with haptic feedback technology, may it be an impact on landing from jumping off a cliff or a Thunderjaw’s mighty roar, every vibration has a distinct feel to it. And pulling down the R2 and holding it also gives that sensation when Aloy is struggling to hold it down through both the haptic and adaptive trigger features.

It’s also worth noting that Guerrilla Games fixed a few awkward character movements during conversations that looked stiff from Zero Dawn. While there are still some moments when Aloy looks lazy-eyed, it’s easily dismissable when you’re hooked by the amazing dialogue all thanks to Ashley Burch, the person behind Aloy’s voice.

Forbidden West isn’t without issues, but these aren’t game-breaking and won’t affect the entirety of your experience when playing. I’ve encountered a few graphical glitches even after the patch where I see distorted assets, a few texture pop-ins, and even a time when the game momentarily fades into a black screen for only a few seconds. Minor issues like these never held the game back from my experience, and it’s nothing that Guerrilla Games won’t be able to fix.

Despite minor technical issues that can be patched up, Horizon: Forbidden West‘s compelling narrative, a spectacular cast of characters, its impressive graphical feat, and superb combat will make your time worthwhile. Horizon: Forbidden West is simply a masterpiece; it’s a game that every PS4 and PS5 owner should not miss. 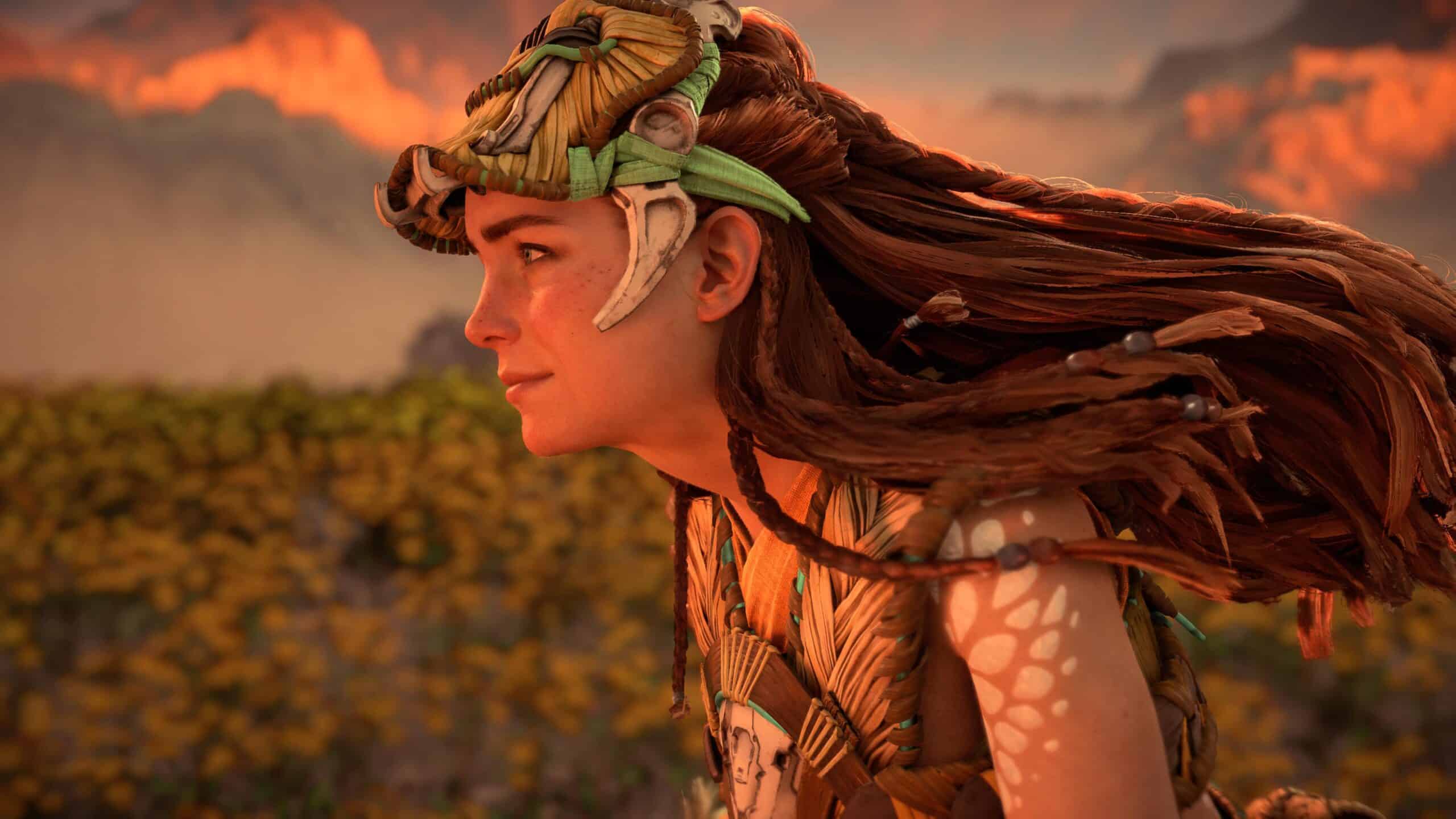 Horizon: Forbidden West – Review
Score Definition
When a title gets a grand number, it’s a video-game worth spending your whole life in.
Pros
An expansive compelling narrative.
Great cast of characters.
Improved combat mechanics and skill tree.
Visually striking, one of the best looking games.
New, challenging machines to take down.
Whole set of new weapons at your disposal.
Cons
None.
10
Masterpiece