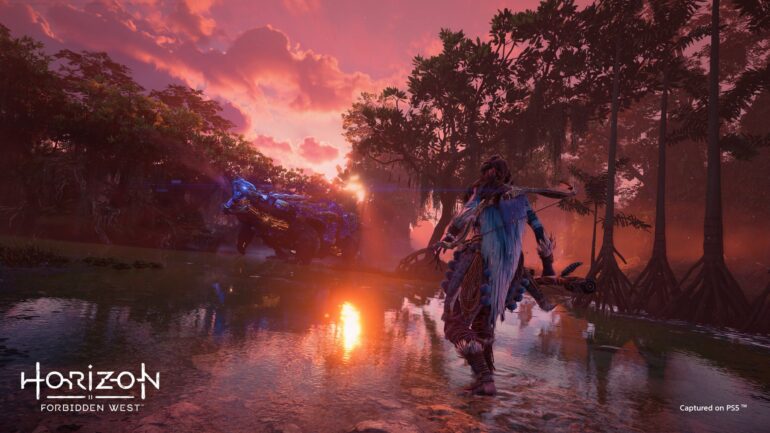 Another glimpse at Horizon Forbidden West’s New Tribes and lands makes players more excited for the upcoming sequel that will release next month on February 18, 2022.

PlayStation and developer Guerrilla Games have released a new trailer for Horizon Forbidden West, this time giving an overview of the tribes that inhabit the Forbidden West.

PlayStation have been ramping up efforts to get people hyped for its upcoming game, which releases roughly a month and a half from now. The videos, shows us aspects of the world that players will encounter in the game.

Previously, the company sent out video showcasing the various machines Aloy will be dealing with. This time, however, it’s all about the tribes that inhabit the frontier.

From the Utaru in Plainsong, to the battle-worn Clan Lands of the Tenakth, new alliances and deadly enemies await Aloy.

In the latest trailer, we are shown a glimpse of the lands that lie West of Karja territory. The trailer didn’t feature any actual gameplay but made up for it by showing us vistas and locations we’ve never seen before. Along with the peoples and customs that are uniquely their own.

In Plainson, we see a mysterious red blight consuming all in its path. The Utaru ‘sing’ to heal the land, but that alone will not save them.

Further West is where the Tenakth claim dominion. Three separate clans cling to a fragile peace, all the while facing off against a new enemy, Regalla and her rebels. We don’t know anything about this Regalla yet, but it would appear that her forces are to able to tame the machines much in the way Aloy did in the first game.

There is a rumored clan somewhere in the very edges of the West. They are described as even stronger than the ones we know.

Transcript from the trailer

Horizon Forbidden West is set to release on February 18th on PlayStation 4 and PlayStation 5.