Horizon Forbidden West All Machines List – What We Know So Far

All revealed machines of the Forbidden West 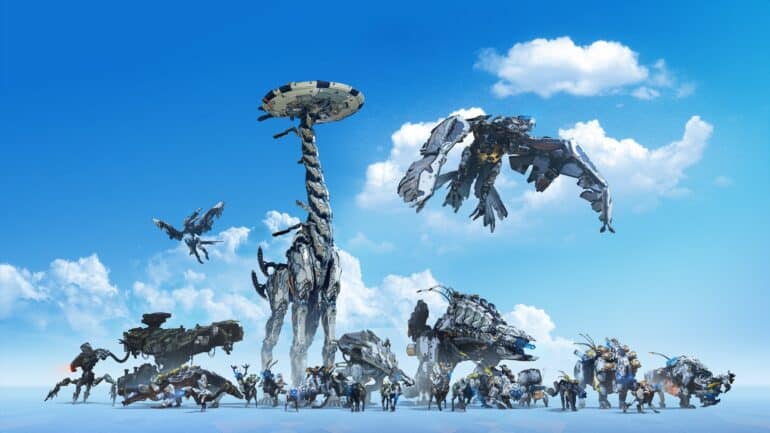 Horizon Forbidden West machines are the most iconic among the diverse group of enemies that Aloy has to face.

Machine is a term used by the tribes in Horizon Forbidden West to refer to any of the technologically advanced robots that have risen to become the dominant species on the planet. It was first used in the game Horizon Zero Dawn.

They are based on various forms of fauna that have existed throughout the course of Earth’s history, including avians, ungulates, and even dinosaurs, and are designed to mimic their movements.

The machines in Horizon Zero Dawn were originally divided into four distinct classes. Players, on the other hand, were unable to see which classes they had been assigned to. Horizon Forbidden West is likely to have the same, and possibly additional, categories. They’re listed as follows:

Machines that have never been seen before populate Horizon Forbidden West’s new setting. Aside from Slitherfang, Guerrilla provided additional information on previously unveiled robotic creatures. Here’s a list of the game’s most terrifying new characters and machines that have been unveiled so far.

The Bristleback looks like a warthog. The Bristleback travels in herds and uses its tusks to dig up buried treasures. Think of it as grazing, as Bristlebacks are peaceful to observe from afar.

When threatened, Bristlebacks will use their tusks as weapons. It has Blaze lines running under its belly, connecting to canisters at the back. Provoking the Bristleback causes it to attack with a powerful ranged attack using recovered scrap and elemental material. Those tusks aren’t for the faint of heart.

A Burrower resembles an otter. With its long body, long tail, and short limbs, the Burrower can paddle through water, and like their animal inspiration, can swim. Burrowers appear to travel in groups, much like Watchers do on land.

Burrowers can use high-pitched sounds to alert allies and stun enemies. Sometimes they tunnel underground and resurface unexpectedly. Burrowers are a basic enemy type that Guerrilla describes as the game’s Watchers in Horizon Forbidden West. The Burrower is a recon machine that uses high-pitched sound to stun targets and alert allies.

The Clamberjaw has a face that resembles that of a baboon. With its mask-like component it can completely conceal its face from view. Its back is equipped with two batteries.

Clamberjaws are scavengers. To gather food scraps, it makes use of its claws and tail. It can cling to walls with ease and has a wide range of abilities that debilitate its enemies. Clamberjaws also flock together and gather in large packs.

Fast, agile, and ferocious, the Clamberjaw is a formidable adversary. They’re both acrobatic and vicious, and Clamberjaws can also debilitate their enemies. To deal with them, players must keep an eye on the ground and the trees.

The Clawstrider in Horizon Forbidden West is a combat machine. The Clawstrider is a bipedal dromaeosaur with sharp metal plating that resembles feathers. A pair of Metal Vessels can be seen on its back and its lower jaws resemble chainsaws. They have a Power Cell on their underside.

Like their extinct counterparts, these mechanical dinosaurs pack a punch.
Clawstriders appear to be aggressive and move in packs. They are swift and relentless in their pursuit. They are also fiercely protective of their land and machines. Clawstriders also scream, temporarily stunning Aloy.

The Regalla, a rebel Tenakth faction, have been seen riding Clawstriders. Like corrupted machines, these Clawstriders have dark red cabling around their necks, but it is much less pronounced and does not smoke. Those controlled by the Regalla have tribal markings on their armor plating.

Despite their aggressive nature, Clawstriders can be mounted as seen in previous footage with Regalla soldiers attacking Aloy. For the first time, a mountable machine without an ungulate chassis. That means players can take control of their own Clawstrider.

Rollerbacks are giant pangolins that like to roll. They hurl themselves at targets, seemingly propelled by the flames shooting from their scale-like armor. The back of the Rollerback is covered in metal plates, giving it the appearance of a pangolin. At its belly, a container resembling a Behemoth’s cargo container hangs.

When rolled into a ball, the Rollerback is capable of destroying everything in its path with a trail of fire. An ability that no other machine possesses, the Rollerback can summon and reapply its plating to repair itself. We’ve seen them projectile-eject scales, then magnetically recall them. Rollerbacks can also fly. Some components of the Rollerback can be targeted to disable or slow it down long enough to dismantle it.

The Shellsnapper resembles that of a gigantic snapping turtle, except that its shell is completely covered in foliage. After seeing Aloy in the first trailer, we first saw this majestic giant turtle emerge from the swamp with its camouflaged body.

The Shellsnapper is a combat machine that ambushes those who intrude on its territory, even if it appears to be beautiful. This machine guards the Forbidden West’s swamps. It can dig itself a hole and lay dormant for weeks, its impenetrable shell being covered by the foliage. Despite this, it can quickly prepare for battle and ambush intruders.

Despite its size, the Shellsnapper is quick and can jump. Like real-life snapping turtles, it appears to be able to stretch its neck to bite opponents. It can also fire a powerful blast of water at targets.

After a few attacks, it will release a large burst of energy, capable of stunning multiple hunters. In addition, it’s protected by a tough shell, so players will have to get creative if they want to take it down.

An enormous cobra-like serpentine machine. The Slitherfang can coil around ruins and spit acid, which makes it a dangerous foe. Initially, they appear to be one-man operations. The Slitherfang’s attack pattern changes as it is damaged in battle.

The acid used by the Slitherfang is stored in a tank at the base of its throat, which allows it to fire pressurized acid streams. The rattle on its tail can also be used to fire lightning bolts, creating a large-scale electrical wave. There are several nodes on the Slitherfang’s neck that can be used to temporarily incapacitate and deafen opponents. Humans can use the rattle of the Slitherfang to their advantage by shooting it.

The Sunwing has flexible solar panels on the wings giving it the appearance of a pterosaur. As acquisition-class machines, Sunwings may use their photovoltaic wings to store energy, it’s awe-inspiring to watch the planes of Sunwing fly over the sunset.

In Horizon Forbidden West, Sunwings can be found patrolling the skies, frequently hovering at high altitudes in order to take in as much solar energy as possible. According to Guerrilla, they are vulnerable while collecting solar energy, but they are also more vigilant when stationary. Aerially, Sunwings are nimble and quick.

The Tideripper is an amphibious plesiosaur-style machine. It has a half-disc structure on its back. Both land and water-based attacks can be devastatingly done by the Tideripper.

The Tideripper, as a marine creature appears to be harmless, but they’re actually quite dangerous to Aloy on the surface. As it removes sediment from the water, it exerts control over the ocean and builds up a store of resources to power up its attacks by filtering the water.

The Tremortusk is a four-tusked mammoth. Heavy weaponry like cannons and armor plating adorn this fortress-like titan. A faction known as the Regalla controls Tremortusks in Horizon Forbidden West. In a similar fashion to Thunderjaw’s Disc Launchers but purple, they like to circle their targets and shoot them.

Also, like a Fire Bellowback, the Tremortusk can fire flames from its trunk by swinging its head side to side. Its large storage unit on its stomach probably the one fueling it. Once it has taken enough damage, it will rise and throw the humans off. It also often charges towards the player.

This list is a work in progress and will be updated as soon as new machines are annouced or revealed.

We are all excited for Aloy’s comeback on Horizon Forbidden West, as it is #1 on our Most Anticipated Games for 2022, to be released this coming February 18, 2022. The game will be available on both the PS4 and PS5.