How to Get Escape from Tarkov Twitch Drops – New Year Event 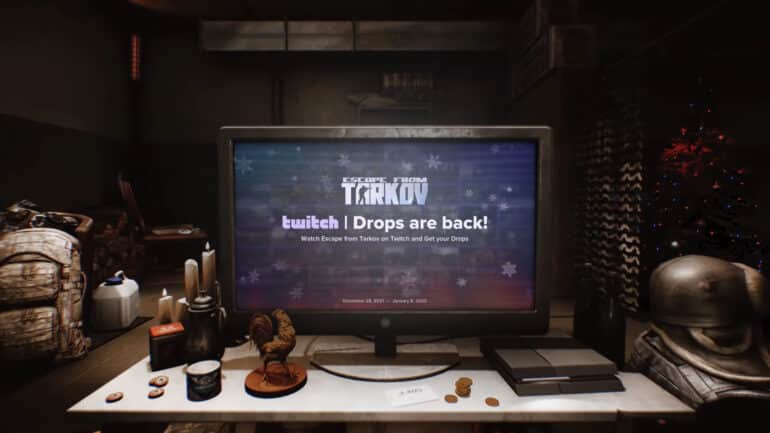 Hosting its traditional Twitch Drops Event for Escape from Tarkov on its New Year Celebration for 2022, Twitch is once again spreading the holiday cheers this year to all of its streamers and their audiences.

Battlestate Games, the devs of the hit first-person shooter Escape from Tarkov, has announced in their website that they will be participating this year’s Twitch Drops event. They have also released their drops schedules as well as a list of participating streamers that will be handing out drops on those days.

What are Twitch Drops?

The Twitch Drops are a fun way to get in-game loot simply by watching your favorite channels on Twitch! Only by logging into your Twitch account, setting your profile to Online, and meeting the Drop goal are you eligible for Drops. To receive your in-game rewards after you’ve earned them and claimed them, simply link your Twitch and Steam accounts.

For those who have heard about this just now, Twitch Drops is Twitch’s way of giving back to its community by partnering up with game developers to provide in-game giveaways to viewers, while helping streamers promote and build their own Twitch community even bigger.

How to join the Escape from Tarkov Twitch Drops?

If you are a Twitch streamer and want to join by giving away drops to your viewers, you can simply do the same steps as a viewer and stream Escape from Tarkov under its category during the specified dates. Everyone who streams Escape from Tarkov during December 28, 2021 to January 8, 2022 are able to give drops to their eligible viewers.

As for the dates in between, Battlestate Games has prepared a scheduled list of Twitch streamers who viewers can tune in to to get drops.

What to expect during the Escape from Tarkov Twitch Drops?

Viewers who watch streamers on their specified dates will be guaranteed to get 1 in-game item ranging from weapons, gear, valuables, etc. Viewing time will count towards the drop progress so long as the streamer is participating for the drop on that day.

Battlestate Games will also be posting announcements and hosting some events in their official Twitch channel. Viewers are also encouraged to tune in to their broadcasts everyday starting from 2:00 AM PST as they may have a chance to win various gifts from these events.

Below are all the Twitch Streamers who are scheduled to participate in the Escape from Tarkov Twitch Drops Christmas Event 2021.

In the Escape from Tarkov category in Twitch, each and every broadcast that has Drops turned on counts toward your goal. This means that you can see a mix of channels that show the Drop. At the top of the chat window when Drops is on, a status overlay will show how many drops are in the chat.

So if you see your favorite Twitch streamer/s included on one of these lists, mark your calendars and be sure to join their streams so that you can also get some drops.

How To Claim Twitch Drops Rewards for Escape from Tarkov?

As soon as you have earned the Drop on Twitch, you can “claim” it. You can do this in the Chat window or in your Drops Inventory. After you claim the items, you just have to make sure that your Twitch and your Escape from Tarkov account to get them in-game, as mentioned on the steps above.

How long should it take to receive Twitch Drops for Escape from Tarkov?

If you want to experience the holiday spirit in Tarkov yourself, why not take a quick read through our Escape from Tarkov To The Tree Quest Complete Guide – All Christmas Tree Locations and get yourself some head start in completing the holiday event quests.

Check out Battlestate Games’ website to know more about the event.