Escape From Tarkov Streets of Tarkov – Everything We Know 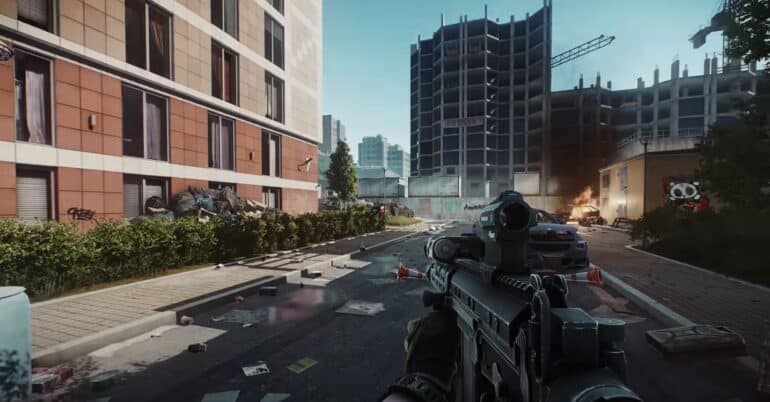 Streets of Tarkov is confirmed to be releasing sometime this 2022. Although Battlestate Games have not given any solid schedule for when the map will be dropping.

Considering that 2022 is almost over at the time of this writing, we could potentially see the Streets of Tarkov pushed into next year. A tweet earlier this year from the Studio Head of Battlestate Games, Nikita Buyanov, hoped that the first iteration of Streets of Tarkov will be ready before autumn.

It’s almost the end of October so there isn’t much time until autumn is over this November 30th. We aren’t sure when the Escape From Tarkov developers will release details about the new Streets of Tarkov map but we suspect to get some news in the middle of next month.

Until then, we’ll have to wait for Battlestate Games to make an update. We’ll be sure to do our part and update this article for the new details as well.

Streets of Tarkov is a massive new map but that isn’t the only addition for Escape From Tarkov when this update drops.

Nikita Buyanov stated that the developer team’s primary focus at the moment is ensuring that Streets of Tarkov is playable in terms of performance. We’ll constantly see updates to the map until it reaches its final version. Considering that Battlestate Games is aiming for a 40 player raid in one match, the challenges of ensuring that gameplay remains stable would be difficult.

It can’t be understated how massive Streets of Tarkov is supposed to be. Take a look at some of the screenshots Battlestate Games shared over at Twitter.

The image above is thanks to NoiceGuy Tarkov and the following Reddit users. This is only the possible look for what the layout of the Streets of Tarkov map might be. We have yet to see the final details, but we’ll be sure to update this if Battlestate Games gives an update.

Battlestate Games has teased Streets of Tarkov since 2020 and we’ve gotten a good look of what the new map is supposed to look like. Check them out below.

In the first teaser trailer for Streets of Tarkov, we get a good look of what the new map is supposed to be. It’s an urban city environment complete with tall buildings in the background and apartment complexes. There isn’t really any action in this teaser, but we get to see just how big this map is expected to be.

The city feels desolate yet lived in. Graffiti on the walls, abandoned cars, and looted stores are all there to explore. Whatever happened here, people left in a hurry after looting everything they could.

The second teaser for the map, although this time we’re treated to a more extended view of the city. Before when we’re shown the apartments, this time Battlestate Games showcases the abandoned restaurants, clothing shops, and grocery stores from what should’ve been a busy district in the city.

A few scenes in the teaser in particular shows the lonely stretch of a quiet street with nothing but abandoned cars. It’s easy to imagine avoiding such open areas to traverse as there are plenty of platforms to shoot you down from the buildings above.

An extended trailer of the Battle for Concordia that shows us any form of combat. We’re treated to a perspective of a trio exploring the city as they clear out tight corridors and hallways. Eventually they get into an engagement in the middle of the street.

Unlike the first two teasers, this time we’re actually shown how combat would work in an urban environment of Escape From Tarkov. From the large open streets to the tight hallways to underground parking lots, firefights are intense and unforgiving with some interiors being dark and hard to see.