How to Get Plague Doctor Mask in New World

One of the Best New World Masks – Headwear Skins 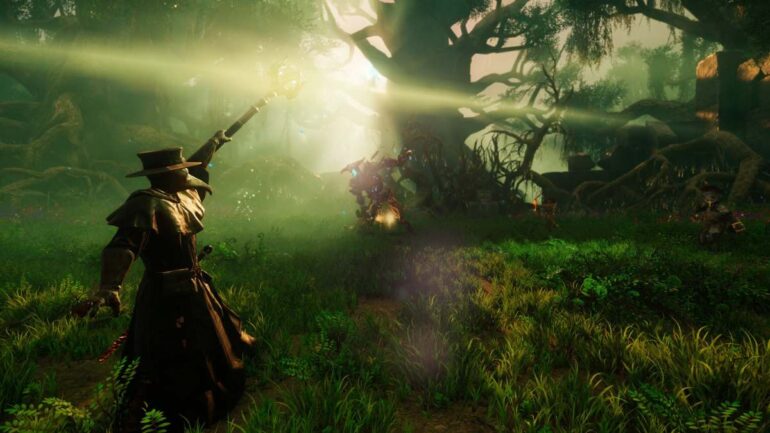 Amazon’s New World is your typical MMORPG and when it comes to MMORPG’s, you can never go wrong with trying to get your character to look good, and probably one of the best pieces of cosmetics you can get for especially if you’re a fan of the middle ages is the Plague Doctor Mask.

The Plague Doctor’s Mask of the Occultist is one of the many pieces of head armor that players can get in the game. This particular piece is modeled after the iconic mask with a bird-like beak that has protected plague doctors from diseases like the Black Death back in the Middle Ages of Europe.

For a bit of trivia, the mask’s purpose was to keep away bad smells, known as miasma, which were thought to be the principal cause of the disease. A famous French doctor, Charles de L’Orme, was the one who perfected the mask and gave it the iconic look we all know today. A mask with a purpose!

This piece of Apparel is Tier V and you’ll need to be level 60 in order to equip it.

In order for us to get our hands on this awesome Plague Doctor’s Mask of the Occultist, we need to be a part of the Syndicate Faction and reach the Tier V rank of Alchemist, which you can get achieve by going out and doing as many Faction Missions as you can in order to earn some Reputation and completing the Trial of the Alchemist.

When you’ve become an Alchemist then you just simply talk to a Syndicate representative and check their wares. You will need 30,000 Syndicate Tokens and 800 coins in order to buy it. Do take note that the gear is “Bind on Pickup” so don’t go thinking you can sell it or trade it to a friend.

The mask gives an increase to your Intelligence, Constitution, and has an Empty Gem Socket.

Where to Get an Entire Set of Plague Doctor’s Attire?

For those of you who feel that just having the iconic helmet is lacking and you wanna go for a full-fledged Plague Doctors attire then you’re in luck as the whole set is available in the Syndicate Armory.

Each piece of the set comes with an Empty Gem Socket, a boost to your Constitution, Corruption Resistance, and a small reduction to your cooldowns.

Here’s the pricing for the rest of the set:

An Easy to Get Plague Doctor Mask

Do you dread the grind on getting the Faction Reputation you need for the Syndicate’s Plague Doctor Mask? Well, you’re in luck as the New World in-game store is adding some new Halloween theme seasonal items from weapon skins to housing items.

One of the items they’re adding is a new Plague Doctor Mask which will cost 7,000 Marks of Fortune (premium currency).

Getting the rest of the set may take some more missions but it’s entirely up to you if you think it’s worth the grind. You can check out our guide on leveling so you can reach Level 60 in order to equip any of the Plague Doctor’s gear of your choice or all of them.

Here are other New World guides: