Learn how to pass through the gates to get the treasure below. 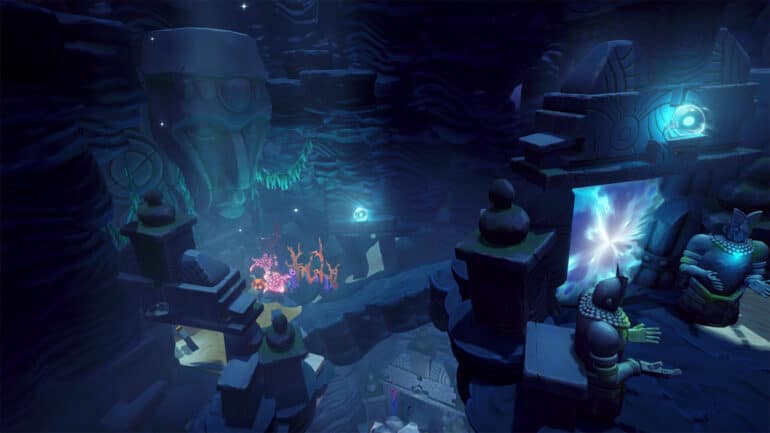 There is a cave in Dazzle Beach that holds the Orb of Power. However, the path to the orb is lined with several gates that can only be opened if each of their puzzles are solved. Solving these puzzles require wits, patience, and a bit of elbow grease, but it will all be worth the effort once Dazzle Beach gets completely cleansed from the Dark Magic.

In this guide, we will be talking about the steps on how to solve the gate puzzles in the Dazzle Beach Mystical Cave in Disney Dreamlight Valley.

How to unlock the Dazzle Beach Cave

To unlock the Dazzle Beach Mystical Cave, you first must progress through the main story until you are able to unlock the other regions of the valley. Unlocking the Dazzle Beach requires 1,000 Dreamlight and you only have to interact with one of the Night Thorn blockades in order to clear both paths to the beach.

Then, as you progress through the story, the dark entity will appear to hide in a cave on the eastern section of Dazzle Beach. In this cave, you will meet Ursula, the Sea Witch from The Little Mermaid. She will then strike a deal with you to help set her free from the cursed cave, and to do so, she will give you the Crystal Key.

Use the Crystal Key at the pedestal near the closed entrance of the cave that is near the eastern path from the Peaceful Meadow to the beach. Once done, the cave entrance will open up for you to explore the cave.

How to solve the Dazzle Beach Mystical Cave Puzzles

Inside the cave, you will find a path that swirls far down below to where the Orb of Power lies. Throughout the path are gates that are closed out by some magical barrier which can only be dispelled if the puzzle for the gate is solved. There is a tablet for each of the gates that will provide a clue on how to solve the puzzles.

There are three locked gates that you need to solve. To prepare you for the trip and make the journey easier, you will have to prepare the following items:

The first gate has three statues standing near it. The tablet nearby suggests that you will have to put the right type of gem on each of the statue. The statues also have crystals on their body, each differ in color.

To solve this, you will need to mine a garnet, an aquamarine, and a peridot to place on the statues. Just bring the regular gems and not the shiny and larger versions of these gems. Once you have all of them, place the gems according to the color of the gems on the statues, or like this, from left to right facing the gate: peridot, aquamarine, garnet. Once all gems are placed, the barrier on the gate will disappear and you can proceed to the next gate.

For the second gate, you will find another set of three statues with the soil on their base dug out. The tablet suggests that you need to plant the right crops in the holes to open the gate. It also provides a hint on what type of crops should be planted on the holes.

To solve this, you will need to plant the seeds for a carrot, wheat, and tomato in the holes, in that order from left to right. Then, wait for all of the plants to grow; the longest time that you will have to wait is 25 minutes for the tomatoes to fully grow. Once all crops have fully grown, the gate should open up. You can then harvest all of the crops as you will need them to solve the next gate.

For the final gate, you will need to use the crops that you grew to cook a meal. There are also rocks around and smashing one of them will reward you with the dish’s recipe. There will be a cooking station nearby where you can cook. Put the carrot, wheat, and tomato in the cooking pot, cook them, and you will end up with a Veggie Pasta. You then have to eat the dish in order to remove the barrier from the gate.

Finally, you will arrive at the bottom of the cave where you will find a pond. The tablet will tell you to fish out the orb from the pond. Take out your fishing rod and fish out the orb as you would when catching a fish. Once the orb is caught, bring it back up to the surface and place the orb on the pillar that is just outside the cave to complete the quest.