How to Unlock WALL-E in Disney Dreamlight Valley

Learn how to invite WALL-E into your Village. 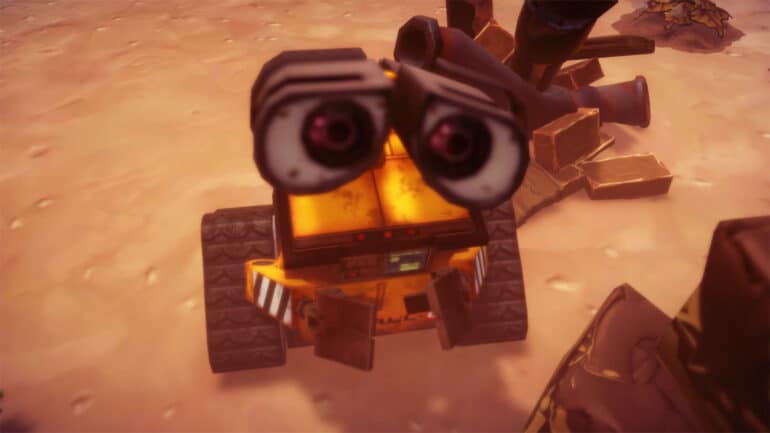 WALL-E is the adorable and shy trash-collecting robot that many fans love, and he’s also one of the characters that players can hang out with in Disney Dreamlight Valley. The catch is that WALL-E is hesitant to leave his place behind to go and join the valley, so players will have to do some favors to coax him out of the dump.

In this guide, we will be talking about the steps to unlock WALL-E in Disney Dreamlight Valley.

Before you can unlock WALL-E and the rest of the other Disney characters, you must first gain access to the Dream Castle. In order to do this, you will have to progress through Merlin’s quests until you unlock The Dream Castle quest where you have to remove the Night Thorns that block the castle’s entrance.

Once the Night Thorns have been removed, you can then enter the castle where you will see the first three Realm Doors which are still covered by the thorns. To unlock WALL-E first, you must choose the option to visit “a desolate planet with a shy robot” which will take you to his realm. Alternatively, you can opt to unlock the other two characters first, which will require 3,000 Dreamlight shards each.

How to unlock WALL-E in Disney Dreamlight Valley

Once you arrive at WALL-E’s realm, you will find WALL-E stuck on a spot as his tire track is broken.

Go search for his tire track that is in the area. Once you find it, head over to WALL-E and give him the replacement part to allow him to move once again.

You will then need to gain WALL-E’s trust by creating trash cubes for him. First, you will have to collect some trash by interacting with the trash piles that are scattered across the realm.

Once you have collected 60 trash, head over to the Crafting Station nearby and craft 6 trash cubes. Afterwards, give the trash cubes to WALL-E to complete this task.

After giving the trash cubes to WALL-E, he will then give you some seeds to plant some trees in the realm. You would also get some more seeds from the trash piles you have collected trash from, as well as from checking the broken fridges.

After collecting 8 seeds, use your shovel to dig holes where the seeds will be planted in. Any spot will do as long as it is in the realm. After planting the seeds, you will also have to water them using your watering can. Just wait for a few seconds and the tree sprouts should grow into small trees, after which you can talk back to WALL-E to complete the task.

Step 4: Convince the shy WALL-E to join the Village

WALL-E will still be too shy to join you back in the village, so you will need the help of the other residents of the Village to find some gifts to give to WALL-E.

You will first have to go to Merlin to get some advice. He will ask you about the things that WALL-E likes, and you can choose any of the dialogue options to proceed. Then, you will need to talk to Scrooge McDuck to get an interesting object to give to WALL-E.

Talk to Scrooge and he will ask you what interesting object you would like to get. You will get the option to choose among an umbrella, a fire extinguisher, or a parachute. You can go for any of the options (we went for the fire extinguisher to be accurate with the movie), but Scrooge will first ask you to get him some Garnets.

You can get garnets as random drops from mining the rocks in the village; some of these rocks will show red crystals on them, which guarantees that a garnet will drop. After obtaining 2 garnets, head back to Scrooge to exchange them for the interesting object.

The next step is to talk to either Goofy or Mickey to get their advice. Mickey will tell you that he has a ball that he can give to WALL-E to gain his trust. Inside of Mickey’s mouse, you will find the ball at the corner of the house, behind the sofa.

As for Goofy, you will need to find a Sprout Boot which has sunk in one of the ponds in the Meadow. Use your fishing rod and aim your line towards one of the ripples in the water. After a few successful tries, you should eventually fish out the Sprout Boot from the water.

Once you have all three items, head back to WALL-E’s realm and give all of them to WALL-E. He will then decide to join you back at the village. You can also place WALL-E’s truck and construct it for 2,000 coins in any clear space within the village which will serve as his house.

One great benefit that you can get from befriending WALL-E is that he will allow you to reconstruct the crop garden which WALL-E will maintain for you. Though the crops that you can get are at random, it’s still a great way to get crops for free.