An overview on the cross-platform feature of SMITE.. 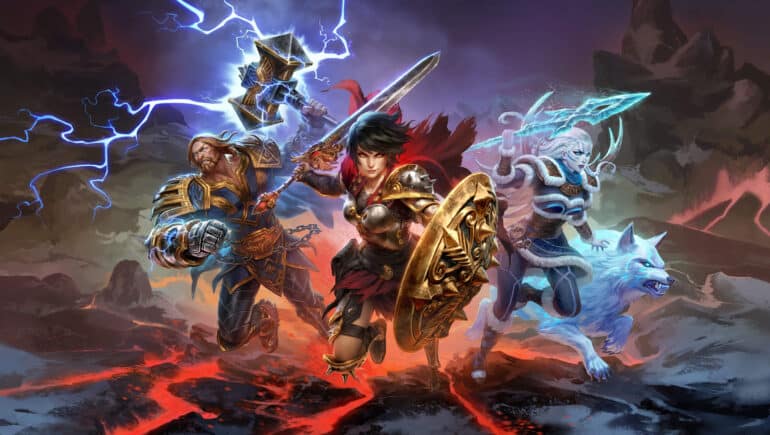 SMITE is a Real-time Multiplayer Online Battle Arena, or MOBA, developed by Hi-Rez Studios, pitting players who play as different gods against each other into high action and fast-paced fights. Since its release 8 years ago, the game is still maintaining a hefty player base which still peaks at around 18,000 Steam players within the past couple of days.

With these numbers, SMITE is quite behind the MOBA giants such as Dota 2 and League of Legends. But SMITE has something that those other two doesn’t have, and that’s cross-platform support.

Yes, SMITE is cross-platform on PC, and consoles: the PS4, PS5, Xbox One, Xbox Series S|X and Switch. PC players can also play with SMITE players from other supported consoles. And because of that, we’re definitely looking at more players than just the 18k that play through Steam.

Fans of SMITE definitely welcomed this feature, as it gave them far more options on where to play the game at. And thanks to the game’s availability on the Nintendo Switch, players can even enjoy playing rounds of SMITE on the go. We’re crossing our fingers that the Steam Deck can one day make Smite playable on it, too.

Is SMITE Cross-Platform Available for PS4?

Yes, cross-platform is available for PS4 players of SMITE. You can go to the Options Menu > User Interface tab, and select the “On” option for Enable Crossplay to play against players on other platforms.

Take note that on Ranked games, you will only be queued with players that are using the same input method as MMR is tallied separately between controller games and keyboard and mouse games. Casual games do not have this restriction.

Does SMITE have Cross-Progression?

Yes, SMITE supports cross-progression on most platforms. Players just need to link their accounts through the Hi-Rez website and their accounts will be merged automatically. Therefore, any progress that you made while playing on the Switch or on the Xbox will be carried over once you play SMITE on the PC.

So far, cross-progression is supported among PC (Steam and Epic Games), Xbox, and Nintendo Switch versions of SMITE.

Is SMITE Cross-Progression available from PS4 to PC?

Sadly, no, your progression in your PlayStation account remains separate from the rest of the other platforms. Despite this, players can still play with other players on other platforms through their PS4 or PS5 through crossplay.

Currently, the benefit that you get for linking your PS4 account to your Hi-Rez account is that you can get to participate in Twitch Drops to get in-game rewards, provided that you have also linked your Twitch account.

What happens to my SMITE Accounts’ Levels when they merge?

Will I keep my Unlocked Gods and Skins if I merge my SMITE accounts?

Yes, you will keep all your unlocked gods and all the skins that you have obtained for them. There are a few exceptions, such as platform specific skins that have the platform’s logo on them may not be available on every platform.

Will I be compensated for duplicate skins or items that I have on different SMITE accounts upon merging?

No, you will not get any compensation for having duplicates of skins or items when accounts merge. For example, if you have the Deathy Chibi Thanatos skin purchased on both your XBox account and your PC account prior to merging, the skin will be considered as one skin after merging with no accompanying gem refund.

What happens to my Gems after merging my SMITE accounts?

Your gems from your Xbox, PC, and Switch accounts will carry over after the merge. Your Xbox gems can be used on all the mentioned platforms, may it be gems owned prior to the merge or purchased after the merge.

On the other hand, gems owned and purchased from your PC and Switch accounts will be added together, but they can only be used through your PC or Switch.

Since the PS4 and PS5 do not have cross-progression and cannot be merged with the accounts from other platforms, the gem ownership and purchase will not be affected.

Can you play SMITE with Friends through Cross-Platform?

Yes, that’s thanks to SMITE’s cross-platform playability. You and your friends can meet in the game regardless of the console that you own; as long as you have a copy of SMITE, you can play with each other or against each other.

How do you add friends on SMITE?

In the main menu or lobby, look for the Social icon on the lower right corner. Then, go to the Friends tab and type in your friend’s username or in-game name in the search bar. Once you see your friend under Other Players, select them and then click on Add Friend.

You can also add other people that you’ve played with recently through the Recently Played tab and then do the same steps.

Alternatively, you can go to your Profile, then search for your friend’s name on the search bar on the upper left corner. Once you find them, click on the small Add Friend button on the lower right corner of their profile picture.

How do I find people in SMITE?

Go to the Social icon found on the lower right corner of the main menu. From there, search for the player’s username or IGN in the search box.

You can also find people through the Profile section found on the main menu. From there, type the username or the in-game name of the person that you want to find in the search box on the upper left corner of the page.

How do I add a friend through cross-platform?

First, you and your friend must have crossplay enabled by going to the Options Menu > User Interface tab, and then select the appropriate option under Enable Crossplay (On, PS4 Only, or Console Only).

Once that is done, you can then find each other through the Social Menu or the Profile Menu using your in-game name or gamertag. Lastly, you can select the option to add them as a friend.

Why are some of my Friends missing after merging my SMITE accounts?

If you have friends that are exclusively on a friends list on an account other than the most active one, they will not be automatically added on the merged account’s list. If this happens, you can simply add them to your friends list again.

Check out this video by SinisterGamez on talking about SMITE’s Cross-play feature: