Juicy Realms takes you from level to level, area to area shooting enemies and taking weapons and causing as much mayhem as you can in order to proceed to the next level. It’s definitely one that has a cutesy art to it, but also backs it up with some gameplay.

There’s a lot of love and quality that has been put into this game. Just from its own design, you kind of get that cutesy feeling the developers were clearly going for. It even takes the time to poke some meta jokes that casual players can recognize.

(This is a gun in the game, and it shoots discounts….)

There are quite the variety of weapons in the game for you to pick and choose from. Unfortunately for those who want to go in guns blazing switching from weapon to weapon, the game does limit weapon carriage to only two, so you’re gonna have to scramble to find the best ones and then stick with them for the entirety of the game.

From the beginning, you get to pick from four individual characters, each with their own unique specialties that you can use to progress towards the game.

The main enemies of Juicy Realm are fruits. Fruits that apparently are rather hostile and use weapons to kill anything that isn’t fruit. It honestly makes one wonder why in the world are the player characters fighting against these cutesy little creatures. In the beginning, the game doesn’t really tell you why and the characters you talk to at the camp just ramble on about how much they hate fruit.

Apparently, the story goes like this, the whole planet has the food chain completely disrupted when fruit became sentient and the line of who’s food become’s blurred.

Despite the somewhat battle-for-dominance of the world the game is going for, it very much carries a light-hearted tone throughout the whole experience. Don’t be fooled though, the monsters you are facing against can kill your character if you’re negligent.

Though there is a bit of a downside towards all the fun and happy-go-lucky feel of the game.

At times, things can feel downright repetitive of having to keep shooting fruit over and over again. Although on the bright side, there are many creative ways to do it. The environment can be destructive and you can use that against the fruits by causing explosion all around the environment.

Many things about the environment can be destroyed whether they’re trees, boxes, and etc. Speaking of which, there are many design levels of Juicy Realms other than just the forest. Which is a good thing, because a change of scenery can help stop a game from looking stale and redundant. 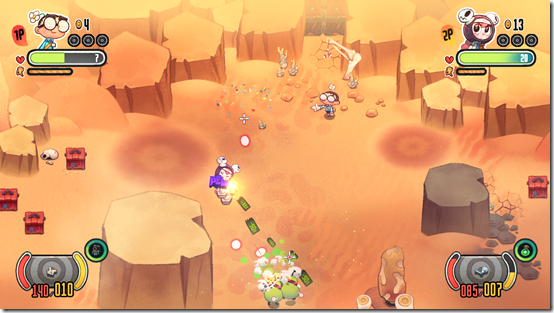 (What you’re looking at is the Steam Gun being used…)

One of the most noteworthy things about Juicy Realms is the bosses.

They’re fun but tough to fight. And it can take strategy and learn the movements in order to beat them. They can beat you if you’re not careful. Though once you figure out their patterns, they become putty in your hands anyhow if you manage to adapt.

And for those who don’t like the prospect of playing alone, there is a cooperative play here. Get yourself a second player and enjoy Juicy Realms as that multiplies the fun better when you’re playing with a friend as opposed to just by yourself. In fact, that’s the best way to play Juicy Realms.

All in all, Juicy Realms is a fun little top-down shooter. It’s something that people of all ages who appreciate the genre can enjoy. The game never really becomes too violent or mature, so they’re safe for children to play. 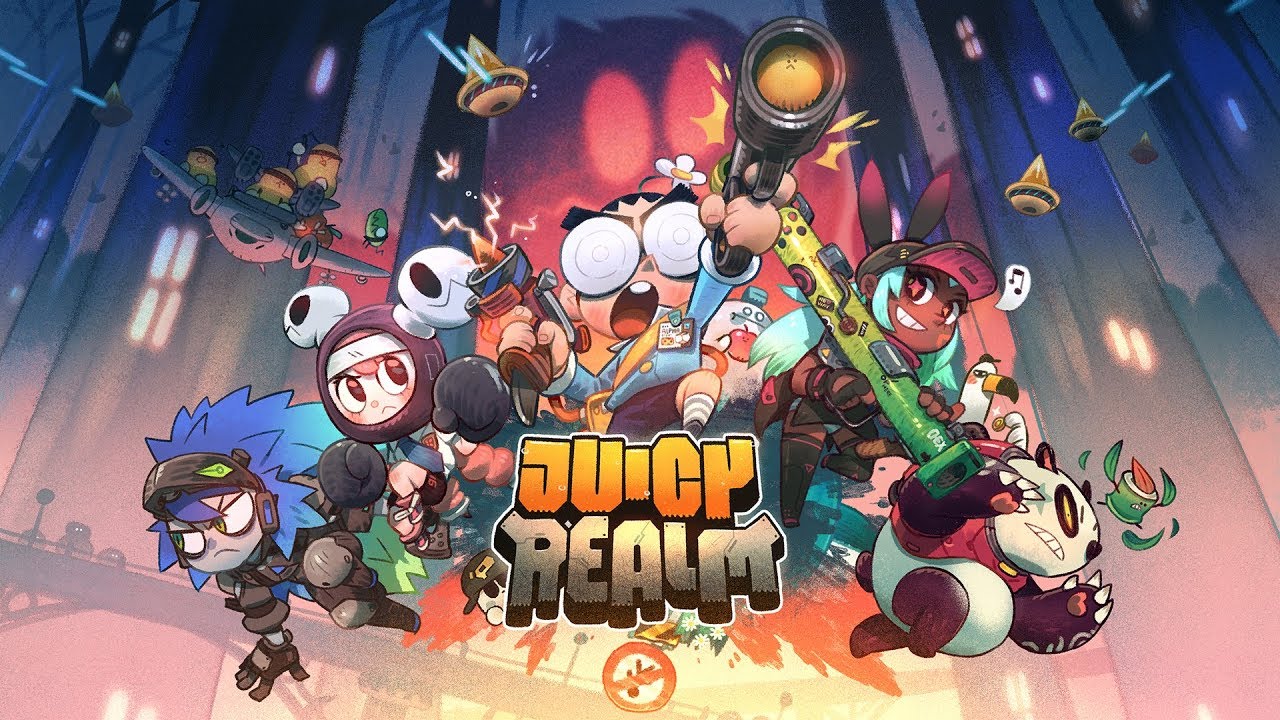 Juicy Realms - Review
Score Definition
We tell you, it’s a good game! It’s not average! It might have some problems here and there, but you have to admit it is a “Good” game.
Pros
Fun
Simplistic
Coop
Cons
Can Get Repetitive At Times
7
Good