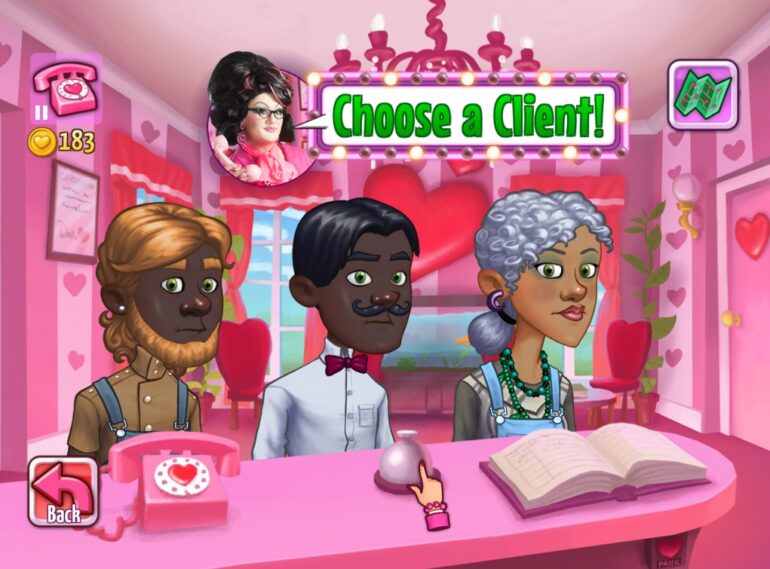 Kitty Powers Matchmaker is a very alluring dating simulator developed by Magic Notion. Unexpectedly comedic and challenging, Kitty Powers’ Matchmaker is definitely a game you should indulge yourself in during a late night all-nighter or lazy afternoon.

At first, Kitty Powers Matchmaker may not seem much and just maybe a little too goofy or outlandish for anybody with a crazy dialogue and interesting leader mascot based off Kitty Powers herself, but don’t stop playing after your first ten minutes, keep going and find out the true entertaining charm this game has to offer. 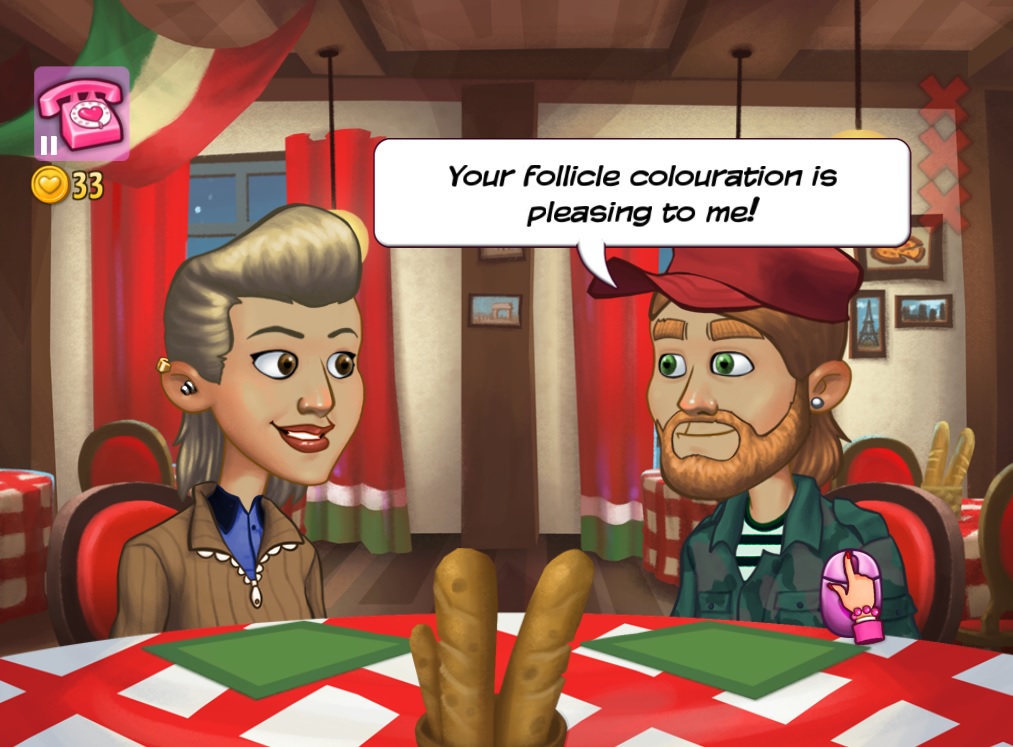 You play as an avatar you personally create under the guidance of Kitty Powers. You are striving to help out a Dating Agency become the best one in town by helping out clients meet and date the love of their life. Being a newbie, you have to earn your reputation through every successful relationship pairing or lose your name with fail dates. You are helping your clients by whispering the best conversation questions and answers in your opinion to all the dates that you attend.

For as simple this game is, the graphics are very perfect to the genre. Not too over-the-top but also not too simple that it just doesn’t catch your eye. In a 2-D world, that is all you need to “find love”, especially in this game. The small effects around each character are pretty cute and how you can create and personalize your very own avatar to pair up in virtual dates is pretty neat. Also, the fact that you can pair up your clients with avatars from all over the world is a cool addition to the game as well. 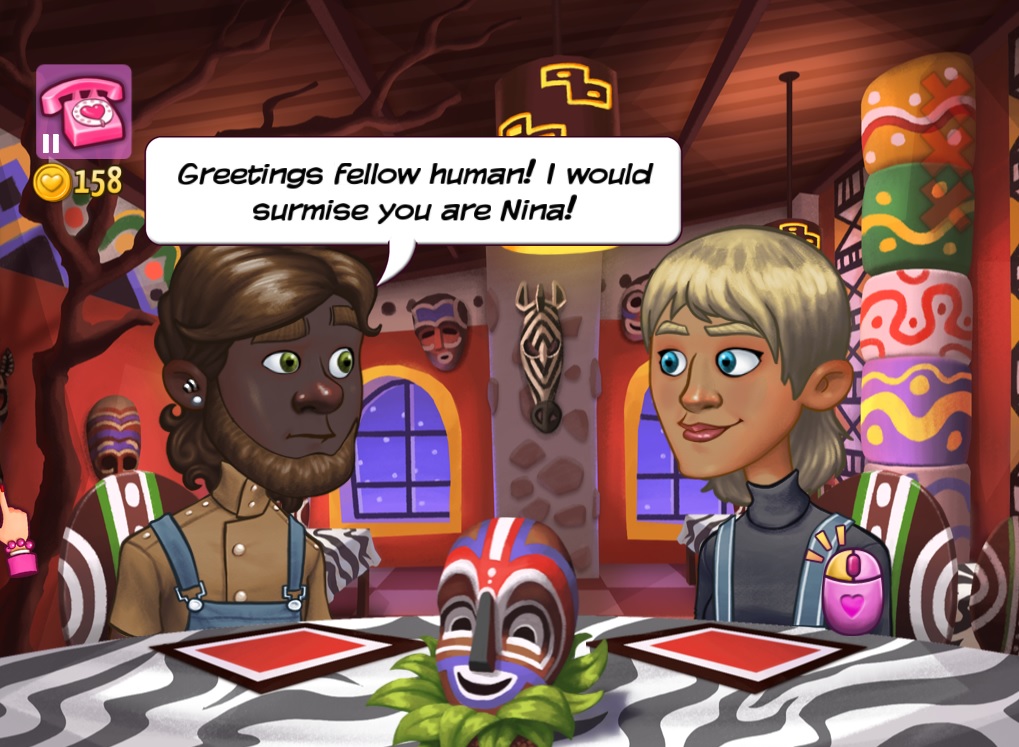 Kitty Powers Matchmaker really focuses on the “little things”, from each little facial hair and blush-on to the whole picture of the type of clothes a character wears. Every detail is a variant to who that character is and how well that one avatar will pair up with another. Also because of this feature in the game, playing can become quite difficult. Every little move you make can become a make it or break it action to succeeding in a pairing.

In this game, you definitely have to be an observant one with other skills like memory especially for the mini games during dates. Also, Kitty Powers Matchmaking puts your strategizing and comprehending skills to the test. With ten different types and an innumerable amount of personality traits that specify a characters’ like dislike, habits and indulgences and many traits from a psychologist’s perspective. Throughout the game you must strategize how you can make this certain duo work out since pretty much any type can be paired up with anyone; you just have to make every perfect move. 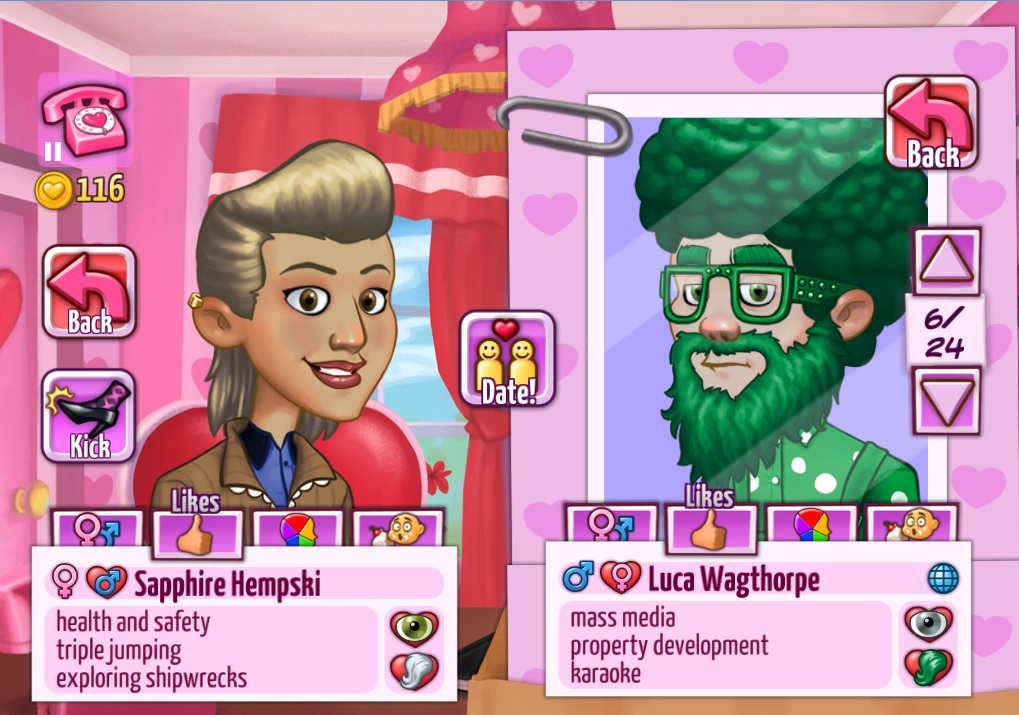 The all in all gameplay is just supremely fun. What may catch you off-guard right away is the dialogue. It is very amusing and creative with a few innuendos that will make you chuckle throughout the whole game. As you continue on in the game, you can unlock more and more mini games that will take part during each of your dates which make the whole game itself super fun and never boring. You will definitely have a shocker when you pair off your first couple; it is “faberooni” as the game would most likely describe it.

The sounds are also really great. The characters themselves and the action-reaction sound effects aren’t that much but at least they aren’t annoying. The best thing about the sounds in Kitty Powers Matchmaker is how each and every restaurant creates and authentic theme which has matching background music to fit the cultural cuisine and ethnic that certain restaurant has to offer. Each place even has the name of the dishes to match its name as if you were at that country tight then and there. It gives you a nice feeling of variety “spesh for youse”. 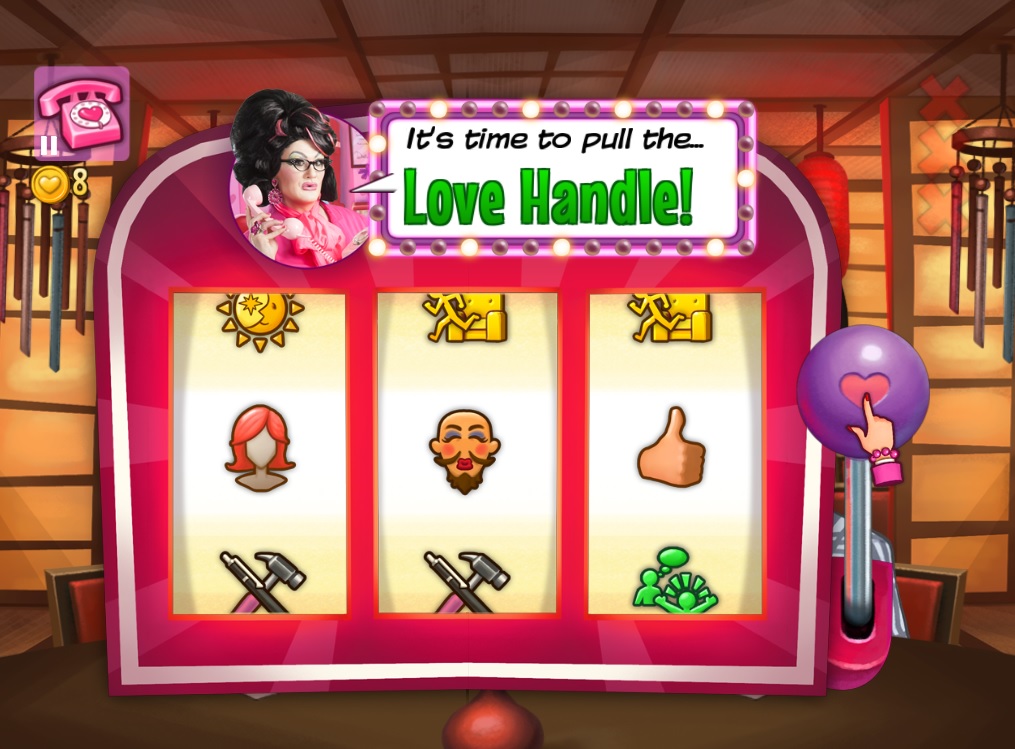 Kitty Powers Matchmaker is definitely an unexpected game that has captured a lot of my time and heart. When you reach maximum level, Kitty Powers give you a “final test” wherein if you pass, you can continue on to the next town and work your love magic all over again. In short, you get to keep your upgrades but replay the game with as much charm as before in what is similar to a ‘new game plus’ type of gameplay. Personally, replaying will be fun as I give high regard to a replay value of this game. Unlocking all the achievements and creating another fabulous Dating Agency will probably take a while to grow old, play-wise.

Kitty Powers’ Matchmaker is one of the best dating simulator games out there with endless things to do and comedic reliefs. Prepare to grab a bucket of popcorn or ice cream and just chillax on the couch or bed to be engrossed in a comedic game loaded with many entertaining aspects with a great amount of challenge.

This review is based on a copy provided by Magic Notion.