Effective today, the Chemtech Drake, Soul, and Terrain are no more. 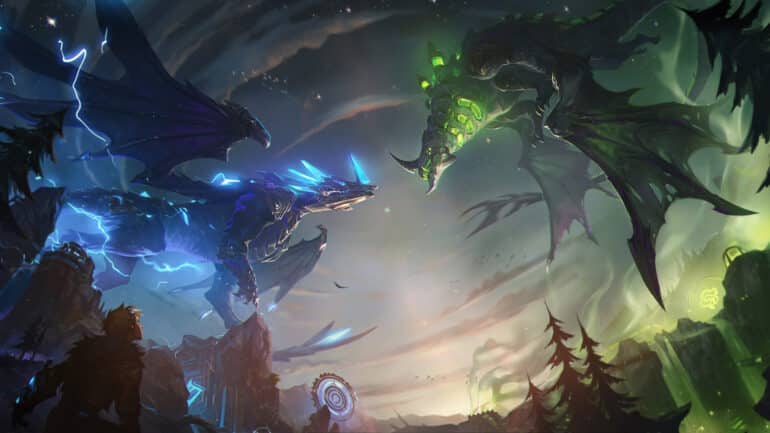 The removal of the Chemtech Drake was a sudden announcement from Riot Games to the surprised community despite the initial plans from the League of Legends Patch 12.2 notes regarding the Dragon, which rolled out earlier today, January 25, 2022.

What is the Chemtech Drake and what makes it so OP?

In a rift where Chemtech is the dominant force, earning four stacks of Dragon Slayer awards the Chemtech Dragon Soul. The Dragon Slayer’s stacked boosts give tremendous effects that increase the overall strength of champions they empower.

Those who slay the Chemtech Drake gain enhanced damage against adversaries who have higher health. An enemy’s chances of surviving are greatly reduced due to the increased damage coming from the Drake’s buff.

As a result of several concerns from players, Riot Games has now decided to remove one of the most divisive new features to hit League of Legends. The Hextech Drake and the Chemtech Drake were added to the game at the beginning of Season 12 of the long-running MOBA. When teams obtained the Soul of each drake, they received various benefits from the two dragons, as was to be expected. Because of this, a number of players felt the Chemtech Dragon Soul to be way too powerful. In the end, Riot Games agreed with the players and has decided to remove the dragon from all future iterations of the game.

The removal of the Chemtech Drake from League of Legends was discussed by Riot in a recent blog post on the official League of Legends website. Despite the fact that the studio stated that it wants the dragon Soul and the associated terrain to have a significant impact on League of Legends, the Drake is simply too powerful in its current form.

“When we introduced the Chemtech Drake, Soul, and Terrain in preseason, we shared our intent for it to have a higher impact on games than the original four elemental drakes. Over the past few months, we’ve heard your feedback across social media and surveys that, even with this goal in mind, the Chemtech addition has just been too frustrating to play with—especially if you’re on the losing team,” according to Riot’s blog, this is what happened.

Riot could not rule out the possibility that the Chemtech Drake will reappear in the future, despite the fact that it has been removed from the game. In order for the Drake to return, the studio has stated that it will have to essentially re-draw the notions that were meant to be linked with the character.

“While the Chemtech Drake and its corresponding systems are disabled, we’ll be iterating on design changes to solve the issues with the current versions, while maintaining the spirit of what we were originally trying to achieve. Our primary focus will be on the terrain. This may take time to do right, meaning there’s a chance we won’t bring the Chemtech Drake back for a while,” Riot’s statement continued. “Our goal, as always, is to make Summoner’s Rift the best it can be, and it was clear that we missed the mark this time. Thanks for sharing all your feedback and for the patience you afforded us while we gave Chemtech Drake its shot in the wild.”

This decision by Riot Games is excellent, however the removal of Chemtech Drake from Season 12 of League of Legends truly hurts the season as a whole. With the commencement of League of Legends Season 12, these new Drakes were supposed to be a major addition. It is likely that Season 12 will have less changes than ever before when it comes to the transition between seasons because Riot is already removing one of the two dragons.